Something Ancient, Something New, Something Stolen, Something Blue. The artist collapses different temporal modes into other singular objects across the exhibition. The exhibition features major new paintings, sculptures, and installations. 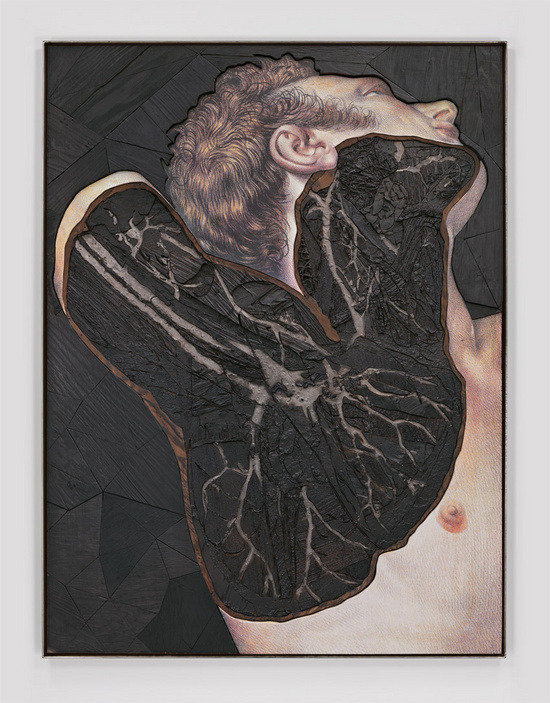 New York, NY... Artist Matthew Day Jackson is a modern day American frontiersman. His interdisciplinary practice is in an all-consuming campaign to chart the outermost limits of human physical experience and to locate the place just beyond those limits where the sublime might reside. Working with a set of signature themes that range from space exploration and war machinery to advanced anatomy, he uses both traditional craft techniques and cutting edge computer mapping to make art that exposes the layered and often dark relationships between technology's abstractions and the palpable effects of time. For Jackson, the measurable and the inexplicable, power and sacrifice, mortality and the infinite are all part of a realm he has dubbed 'the Horriful', where everything we do has the potential to create both horror and beauty. 'The unobtainable distance, no matter how small, is an infinity,' Jackson has said. 'Artists go to that space. It is a space where others cannot or do not want to go, a space which is real and often dangerous, and they report back from there'.

Beginning 6 September 2013, Hauser & Wirth New York will present 'Something Ancient, Something New, Something Stolen, Something Blue', an exhibition devoted to Matthew Day Jackson's latest explorations. Comprising major new paintings, sculptures, and installations, the exhibition will be on view through 19 October at the gallery's downtown venue at 511 West 18th Street.

The first object visitors will encounter upon entering the exhibition is a car called the 'VICTA', a vehicle designed by Jackson's recently deceased uncle, Jim Nichols, and built by the artist's cousin Skip Nichols, a champion driver, builder, teacher, and head of Nichols Industries Racing in Tumwater WA. Built from the ground up, the car is redolent of family relationships and oral traditions. It looks like no other vehicle on the market. Propped high on mechanic's stilts over Mary Heilmann's permanent site- specific floor painting 'Highway', it is an artifact that hovers literally and figuratively apart from past and future design. Visitors passing beneath the 'VICTA' can examine its parts and history, contemplating the car as 'a sort of physical thesis' and a material expression of the exhibition's title. By relocating the hand-built 'VICTA' to the gallery's hushed space, Jackson transmutes its purpose from expected utility to unexpected meaning and offers a point of departure for the journey his exhibition suggests.

For three new major sculptures on view at 18th Street, Jackson has used basic and readily available optical programming technologies to produce full-scale recreations of objects instantly recognisable from the history of art. Jackson has said, 'We live in a remarkable time when every one of us can capture the world around us on a phone, and in a series of clicks remake the world. All of that power resides in the hands of the individual'.

Each of the three new sculptures on view were made in a process that began with photographs taken on a smartphone. Jackson downloaded his images onto a free and common app, then printed, carved and cast the three-dimensional iterations of his pictures, exploiting the primary means by which objects are born into our mediated world. The first of these sculptures, 'Scholar's Rock', replicates 'Scholar's Stone', an artifact that famously greets visitors at the entrance to the Museum of Fine Arts, Boston MA. Scholar's rocks have been admired by Chinese literati for centuries as objects of contemplation. Sculpted over time by the forces of nature, these ancient 'spirit stones' were considered by many to represent a distant, inaccessible paradise where immortals resided on high mountain peaks among clouds – a dream destination for humankind. Sculpting with the aid of a digital mesh model generated by a computer cloud and forming his artifact from compressed chemically identical lunar dust, Jackson mediates boundaries between reality and fiction. He has created a seemingly exact physical twin of 'Scholar's Stone' from imagery that exists only in the ether of digital space, captured with the artist's smartphone. Jackson notes that his sculpture has been produced using technology that potentially could fashion structures on the moon. Like a labyrinth whose end is known and is used as a meditative tool, the reproduction of the 'Scholar's Stone' is a meditation in materiality and of exploration and of our relationship to our natural environment. Continuing the theme of seeking a reflection of ourselves in the natural world, one of the main attributes of a scholar's stone is that it may behold anthropomorphic attributes, a subject Jackson has explored throughout his career.

Jackson collapses different temporal modes into other singular objects across the exhibition. Occupying the central gallery space at 18th Street, his second major new sculpture, 'Burghers of Calais', unites Auguste Rodin's landmark 1889 sculpture 'Les Bourgeois de Calais' with a full-scale 3-D model of a map that represents an area of the moon that hosted six manned lunar missions. This impression of the moon's surface is etched with latitude and longitude coordinates, suggesting a sense of time and place in a world beyond such earthbound standards.

Rodin's six heroic citizens stand upon Jackson's moonscape as if melting from the heat of the sun. Cast in bronze, the material of memorials, the burghers become stand-ins for astronauts, reminders of history and avatars of fated heroism. The piece considers the narrative structure of Rodin's original sculpture. Jackson explains that he was 're-casting Rodin's narrative as a way to tell the story of the forced march of the astronauts en route to the moon and to suggest the incredible loneliness these men felt back on earth after essentially cheating death in the process of exploration. The piece offers a way to consider the relics of the very best achievements of human ingenuity, which now lie eternally silent on the surface of the moon. There is more, always more'.

In Jackson's art, narratives appear through peeling layers. Even the walls of his exhibition are elements in a cumulative archaeology. Constructed from T-111 siding and drywall, materials that reference domesticity, home building, and ownership, the show's architecture reinforces the artist's interest in issues of civilisation and themes of exploration, conquest and consequences. Three new works from Jackson's ongoing 'Anatomical Man' series of paintings are presented on the T-111 walls of 'Something Ancient, Something New, Something Stolen, Something Blue'. Here the artist uses maps as analogs for both built civilisation and the human corpus. His 'Anatomical Man' paintings explore the means by which a civilisation gains and loses as its systems evolve.

In an alcove with an interior created from T-111 siding that suggests an exterior surface, five sculptures of the human body stand encased in mirrored boxes, suggesting celestial beings beneath a night sky. Using the popular traveling exhibition 'BODIES...The Exhibition' as a point of departure, each of Jackson's five figures represents a system of a single body and considers the fantastic pluralities of which we all are comprised. Each of the five sculptures is named for the system of the body it was intended to represent; together these five sculptures explore the place where people and humankind – physical and metaphysical – conjoin. To create these objects, Jackson has employed a range of materials – including aluminum, lead, copper, porcelain, wood, and glass – to distinguish the body's miraculous highways and structures, from muscles, veins and nerves, to the skeleton and flesh. One figure sculpted from the cambium layer of a cedar tree displays the muscular system while another uses rust-prone steel to suggest the iron that streams through our blood. Also on view here is 'Trophy', a recreation of Jackson's head, a rapid prototype of his skull generated from medical scans (using methods not unlike those through which Jackson realised 'Scholar's Rock'). This skull was in turn used as a point of departure for Swedish forensic sculptor Oscar Nilsson who described the likeness of the artist anonymously.

'Me, Dead at 39' is the latest in an ongoing series of photographs in which Jackson documents fantasy scenarios of his own death. With wry humor, the artist's 'Me, Dead...' series brings levity to a universally familiar and troubling subject.

In the final room of the exhibition, visitors will find four new large-scale paintings, each anchoring a wall. 'Far Side II' and 'Nearside', made from intricately carved wood and drywall, reflect the farthest topography upon which the human body has ever walked – the surface of the moon. Flanking these works are 'Enshrouded Paris' (a cast plastic construction of the City of Light coated in Yves Klein Blue, with all waterways rendered in rusted steel) and 'August 6th 1945', both offering aerial views of historic Western cities that stand as icons of society's ability to build artfully and advance technologically. But their densely detailed monochrome surfaces bring to mind the carpets of destruction captured in aerial photographs of Hiroshima and Nagasaki in 1945, in the aftermath of atomic bomb drops. Together these paintings capture the power to create and the equal compulsion to destroy – two opposing forces contained in every human and oscillating precipitously in our modern world. In the center of the space stands the monumental sculpture 'Pieta', a full-scale reference to Michelangelo's 15th century masterwork of the same name. Jackson's 'Pieta' was modeled from a smartphone photograph of a plaster cast of Michelangelo's original sculpture that resides in the Queens Museum. Carved from a massive block of cement aggregate containing rubble, remnants, and refuse collected around New York City, it is a modern day fossil. A memorial to ideals, Jackson's 'Pieta' transpires as the exhibition's final mediation on the process by which things 'become'.

Alongside 'Something Ancient, Something New, Something Stolen, Something Blue', videos from Jackson's 'In Search of.....' series will be screened in the Roth Bar at the 18th Street gallery every Saturday for the duration of the exhibition.

Bunker259
In conjunction with his September opening at Hauser & Wirth and as an extension of a studio practice in which collaboration with other artists and special interdisciplinary projects are priorities, Matthew Day Jackson will open Bunker259, a street level, one-room gallery space in the large industrial building that houses his studio and home in Greenpoint, Brooklyn NY. Bunker259 is a not-for-profit art space pairing artists and writers dedicated to showing one work in conjunction with one piece of writing. A small but ambitious book developed through collaboration between the writer, the artist and Bunker259 will accompany each exhibition. Light refreshments will be served to visitors, who will have access to the exhibitions by appointment. The first exhibition at Bunker259 will be devoted to Boston artist Sandra Allen and will be accompanied by a text by Mario Diacono.

About The Artist
Matthew Day Jackson was born 1974 in Panorama City CA. He currently lives and works in Brooklyn NY.