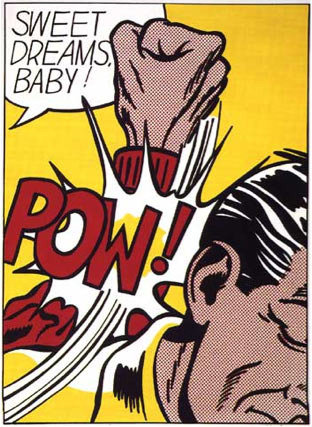 Jasper Johns sparked a revival in print making in America with his historic collaboration at Universal Limited Art Editions (ULAE) founded by Tatyana Grosman, where in 1960 they published FLAG I and TARGET. In 1968 at Gemini he published his seminal set of prints of numbers and in 1971, Johns became the first artist to use the handfed offset lithographic press, resulting in Decoy- an image realized in printmaking before it was made in drawing or painting. For Johns, lithography became a crucial tool to expand his language. In 1977 a Johns one person exhibit was at The Whitney Museum. In our exhibit we include several key early prints.

Roy Lichtenstein’s major breakthrough occurred in 1962 with his historic pop “war” paintings and in 1963 CRYING GIRL marked the start of his important career as a printmaker. In 1965 he published his two most iconic prints SWEET DREAMS BABY and the MELODIE HAUNTS MY REVERIE for which there were no painting equivalents. Oftentimes Lichtenstein reinterpreted the work of artistic luminaries: DeKooning, Ernst and others using his signature Ben-Day dots.

At the outset most of Lichtenstein’s prints were not valued and were taped or pinned to walls and thus few early works exist today in good condition. Now these prints are coveted and frequently shown in museum exhibits. We include the above three works in our exhibit.

Frank Stella burst on the New York art scene in 1958, when his black paintings were included in the exhibition “Sixteen Americans” at MOMA.

Stella was late to printmaking and for a long time many were recapitulations of important painting images. In 1981 he began a seminal series of paintings (Circuits) based on the design of car race tracks (Stella races even today), and working with Ken Tyler in 1983 Stella made his most important prints, large “circuit” works that were independent of the paintings and incised into thick pulp paper and often with 30 or more colors. We include IMOLA V 2 here.

Jeff Talman is an acclaimed sound artist whose new “reflexive resonance” work is made for MARC STRAUS. His installations are often based in spatial or object-oriented resonance, i.e. tones extracted from spaces or things. He isolates ambient sounds and highlights their nuances to create sublime installations that conjure thoughts of the elements at the dawn of time and theoretical technology years from being realized.

This piece, Silicaphonics-14, originates from various conditions of the element silicon including sand, solid and molten glass—as captured on video at a luminous 2,400º F—and as electronics in the silicon chips that make computing possible. Silicon is further portrayed by a sound field developed from the resonant sounds of suspended glass forms, which also serve as surfaces that receive the video images.

Video projected downward onto the forms features the perpetual revolving of molten glass that offers a unique color cycle from white hot to oranges, yellows and reds as the spinning glass cools. Video spills past the edges of the glass forms to create halos of light on the sands below, a visual echo of the materials and the processes involved. Beyond a reverie on the elemental, Silicaphonics-14 engages transformations of matter in a material across millennia.

Talman works with the resonant frequencies extracted from the glass forms to create subtle patterns and shapes both in tone and space. Timbral shifts in the background ambience gently underscore the mesmerizing video as they lushly fill in the spatial volume of the gallery. The outcome is a pure sound painting yet with a dimensional form provided by the interaction of the sound field and gallery. In the end Talman succeeds beautifully, aurally illuminating a world that is not easily accessible but is in the fabric of our existence.

Talman was born in 1954 in Pennsylvania and lives and works in New York City. He studied and then taught piano, music composition, chamber and orchestral music at CCNY and Columbia. Talman has realized sound installations around the globe, including Cathedral Square in Cologne, St. James Cathedral in Chicago, Eyebeam, the MIT Media Lab, The Hudson Valley Center for Contemporary Art, The Kitchen, and deep inside the Bavarian Forest. He is the recipient of numerous awards and residencies including a Guggenheim Foundation Fellowship, a NYFA Fellowship in Computer Art, Yaddo, and Künstlerhaus Krems. In 2014 Talman will mount Moments from the Sun at the Rothko Chapel in Houston, TX in collaboration with NASA astrophysicist Dr. Daniel Huber.

MARC STRAUS is pleased to present our second one person exhibition of Antonio Santin’s paintings, on view from September 8 until September 29, 2013.

There are two connected themes in this new body of paintings: women in lavish settings and highly stylized Eastern rugs. These paintings evolve from striking pictorial motifs. Initially they seem photo-realistic but closer inspection reveals they are lush and highly painterly. Certain passages venture into abstraction, in a manner similar to Chuck Close’s portraits. In Macarena, a dark haired woman wraps her body around an elegant iron spiral staircase, resting one arm on a stair and leaving the other dangling through the banister. Her head is tilted down but her gaze is directed up at the viewer. Meanwhile her body ascending the stairs appears to be levitating. Light arrives from different sources, shedding a luscious glow on her pale, untarnished skin. The steep and ornate stairs correspond to the pattern of the dress, and yet its bright red polka dots create a playful break from the mysterious and somber work.

Unfolding in his works are pertinent issues about beauty and domesticity, about empathy and distancing. In his rugs, Santin weaves together marvelous Oriental designs, hinting at early Muslim and Mozarab arabesques found in medieval southern Spain. This important Islamic lineage in Spanish culture is evident in the grainy textural fabrics.

Born in 1978 in Madrid, Santin completed his MFA at Universidad Complutense de Madrid and Athens Fine Art School. He recently moved to New York after an eight-year stay in Berlin. His work has been exhibited in international museums, including the Kunstraum Bethanien, Berlin, Kunsterhaus Glogauer, Berlin, and the Centre dárt Contemporani Piramidon, Barcelona and can be found in numerous international collections.