In her visible grapple with formal concerns, Brown crowds each canvas with stylistically diverse anonymous figures. Ethridge's photography emanates from his direct experience of the world. His focus is multiple and restless, capturing the vivid and intimate details of his various locales. 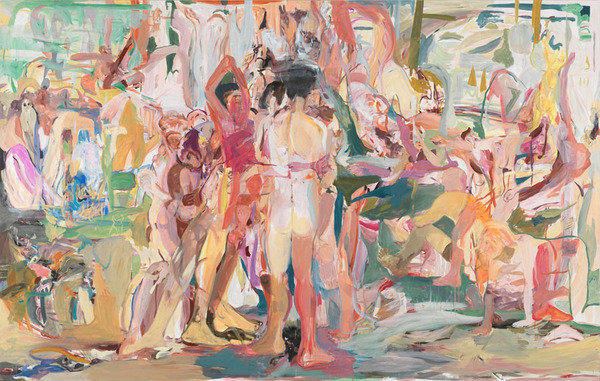 Gagosian Beverly Hills is pleased to announce a major exhibition of recent paintings by Cecily Brown, her first show in Los Angeles in ten years, following an exhibition of related work in New York earlier this year.

In this exhibition Brown continues to explore the tradition of the nude ensemble in painting. In her visible grapple with formal concerns, she crowds each canvas with stylistically diverse anonymous figures--some loosely suggested, others identifiably expressive--who fulfill her explicit aim of conveying figurative imagery in a just-elusive shorthand, resulting in encounters with subjects glimpsed, rather than fully seen. The relative clarity of some faces encourages the viewer to perceptually "finish" other, less defined figures, to resolve the gestural abbreviations. Each painting reveals an active present state, unfolding in a succession of deliberately fluid unresolved moments over time.

Brown draws equivocally from the history of painting as well as pop culture. By freeing her subjects and inspirations from their original contexts, she subverts the role of narrative in the construction of genre, and points to the slippage inherent in quoting from source. Fragmented figures and faces, reduced to complexions or expressions, dissolve into kaleidoscopic concentrations of grey, purple, and sienna with a sudden accent of electric teal or orange. Eyelashes, teeth, hair, the curve of a breast or a shoulder blade may stand out from contrasting brushwork, or separate into momentary tonal distillations amidst the compositional flux.

Building upon the tenebrous compositions of her recent New York exhibition, Brown introduces a bright palette and prominent male figures, making visible sexual and psychological tensions that culminate in The Quarrel II (2013). Engaging with the paintings of Edgar Degas, she draws on the alienated subjects and color-rich settings of La Coiffure (c. 1896) and Young Spartans Exercising (c. 1860). In the monumental Be Nice to the Big Blue Sea (2012), Young Spartans Exercising is recast as a pastoral whirl of grassy greens and flesh tones. Brimming with the intensity of human presence, these paintings play out Brown's persistent fascination with the tension between bold painterly gesture and figurative clarity.

The exhibition is accompanied by a fully illustrated catalogue with an essay by James Lawrence.

Roe Ethridge’s photography emanates from his direct experience of the world. His focus is multiple and restless, capturing the vivid and intimate details of his various locales. He integrates conceptual photography with commercial work, including out-takes from his own shoots and borrowed images already in circulation in other contexts. With this democratic attitude, Ethridge works to capture the vivid and intimate details of his shifting locales within photography’s classic genres of portrait, landscape, and still life.

Roe Ethridge (b. 1969, Miami, FL) received a BFA in Photography at The College of Art in Atlanta, Georgia. His work has been shown extensively at institutions around the world, including MOMA/PS1 (2000), Barbican Center, London (2001), Carnegie Museum of Art (2002), Institute of Contemporary Art, Boston (2005), The Whitney Biennial (2008), Museum of Modern Art, New York (2010), Les Recontres D’Arles, France (2011). In 2011 he was shortlisted for the Deutsche Börse Photography Prize. His first major retrospective, curated Anne Pontégnie, was exhibited at Le Consortium in Dijon before traveling to Museum Leuven, Belgium in 2012. Gagosian Gallery’s first exhibition of Ethridge’s photographs took place in Los Angeles in 2006.