The Malcolm X Steles. With sculptures and drawings, the exhibition brings together more than 40 works from the United States and Europe. The artist has integrated mediums and materials to create a body of literary and visual arts. 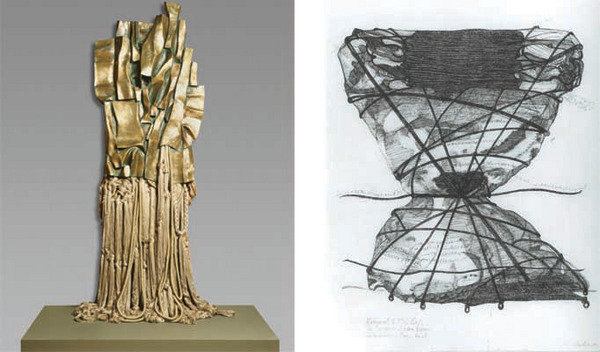 For more than four decades, Barbara Chase-Riboud has integrated mediums and materials in uniquely expressive ways to create a remarkable body of literary and visual arts. This fall, the Philadelphia Museum of Art will present the first comprehensive survey of her iconic Malcolm X steles. With related sculptures and drawings, the exhibition brings together more than forty works from the United States and Europe in the artist’s first solo museum exhibition in more than ten years.

Chase-Riboud’s sculptures dedicated to Malcolm X have been likened to contemporary interpretations of the steles erected in various parts of the ancient world to commemorate important people and events. Cast from cut and folded sheets of wax, the sculptures combine bronze, manipulated into undulating folds and crevices, with knotted and braided silk and wool fiber. This expressive melding of forms and materials is evident in the Museum’s own Malcolm X #3 (1969), which matches the golden hue of polished bronze with cascades of glossy silk thread—a combination that conveys a subtle tension and unity among opposites.

The artist developed the first four sculptures in this series in 1969, inspired by the civil rights movement and her political and personal experiences living in France and traveling to North Africa, China, and the Soviet Union. Chase-Riboud returned to the series in 2003 and again in 2007–8, creating a total of nine additional works. Reconciling vertical and horizontal, mineral and organic, light and dark, the artist has forged in the Malcolm X steles powerful beacons dedicated to the possibility of cultural integration. The exhibition also includes sculptures that share an affinity with the Malcolm X series, such as All That Rises Must Converge/Gold (1973) and Tantra #1 (1994).

Selections from the artist’s Le Lit (The Bed) series of drawings from 1966 will also be on view. Accomplished studies of texture, form, and metamorphosis, they depict recumbent figures that appear to emerge from the peaks and valleys of rumpled sheets. Out of the Le Lit series, Chase-Riboud developed exquisite charcoal landscapes of piled stones and meandering cords. This is seen in Landscape and Cords (c. 1973), which reveals how the artist’s drawing practice continued to parallel the development of her abstract sculptures.

In the Monument Drawings of1996­­–97, Chase-Riboud reused an etching as the starting point for unique compositions that she enhanced and obscured by delicate charcoal, graphite, and ink lines. The titles of these works refer to idiosyncratic pairs of geographic locations and historical or literary figures, such as Alexander Pushkin, Man Ray, the Queen of Sheba, and the fictional Count of Monte Cristo. Signifying imagined memorials to people, places, and events, they encourage viewers to consider for themselves our reasons and means for commemorating the past.

About the Artist
Born in Philadelphia and educated at the Philadelphia High School for Girls, Temple University’s Tyler School of Art, and the Yale University School of Design and Architecture, Chase-Riboud has lived in Paris since 1961. She is an internationally acclaimed visual artist whose widely exhibited work has been seen in solo exhibitions at the Musée d’art Moderne de la Ville de Paris and the Metropolitan Museum of Art, New York; group exhibitions at the Whitney Museum of American Art, New York; the Smithsonian American Art Museum, Washington, DC; and the Centre Georges Pompidou, Paris; and in major arts festivals, including Documenta VI. Her towering public sculpture Africa Rising (1998) stands in the African Burial Ground National Monument in Lower Manhattan. Chase Riboud is also an award-winning poet and writer, known for her books of poetry From Memphis and Peking (1974) and Portrait of a Nude Woman as Cleopatra (1988) and the historical novels Sally Hemings (1979), Echo of Lions (1989), and Hottentot Venus (2003). In 1996, she was knighted as Chevalier de l’Ordre des Arts et des Lettres.

Catalogue
Published by the Philadelphia Museum of Art in association with Yale University Press, the fully illustrated catalogue, Barbara Chase-Riboud: The Malcolm X Steles, offers insightful assessments of the works in the exhibition and includes the artist’s reflections in her own voice on her oeuvre. An introduction by Carlos Basualdo, The Keith L. and Katherine Sachs Curator of Contemporary Art, positions the Malcolm X series in terms of Chase-Riboud’s artistic development and in the broader context of postwar abstraction. Art historian Gwendolyn DuBois Shaw provides an analysis of the series in light of critical debate on the role of memorialization in contemporary art, and visual arts professor Ellen Handler Spitz presents a powerful analytical interpretation and observation of Chase-Riboud’s work. Also included is an illustrated checklist of the Malcolm X sculptures and an updated chronology of the artist’s life and career by Exhibition Assistant John Vick.
The catalogue will be available for purchase in the Museum Store and on the Museum website in September.

The exhibition is generously supported by The Andy Warhol Foundation for the Visual Arts.

For additional information, contact the Marketing and Communications Department of the Philadelphia Museum of Art at (215) 684-7860 pressroom@philamuseum.org