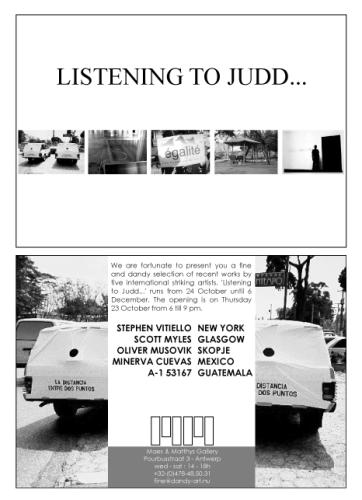 MINERVA CUEVAS - 1975 - lives and works in Mexico City and Berlin

Minerva Cuevas' art is rooted in the socio-economic reality of Mexico, a country where the promises of capitalism have benefited only a few. Over forty million people live under the poverty line; the vast amounts of wealth accumulated there belong to a social elite hidden behind gated communities and policed by security guards. In 1998 Cuevas inaugurated a fictional, not-for-profit company - Mejor Vida Corp. (Better Life Corporation) - premised on a politics of human interaction, good will and an anarchistic desire to evade the economic structures inherent to a capitalist system. Mimicking attributes of the multinational corporation, Cuevas set up an office in one of the tallest skyscrapers in Mexico City, a modernist, glass-encased building called the Torre Latinoamericana.
Through the Mejor Vida Corp. website (www.irational.org), one can order merchandise that is, in the end, semi-illegal: stickers replicating commercial bar codes for use in supermarkets to reduce prices up to forty percent on selected items; fake IDs that make one eligible for the International Student Identification card and all the discounts associated with it; canisters of tear gas for self-protection, presumably when demonstrating against the spread of global capitalism, and letters of recommendation for those seeking employment. Cuevas also arranged for the Lisson Gallery in London and Galerie Chantal Crousel in Paris to issue reference letters on request during the summer of 2000 as her contribution to exhibitions at both venues. For a project in New York City of 1997-8, she provided subway riders with 'safety pills' made from caffeine in response to an advertising campaign that reminded passengers - as potential victims of pickpockets - that 'Awake is Aware'. Cuevas sees her practice as direct social activism rather than political art, which merely comments upon a specific social context. She imitates and inhabits the corporate structure in order to produce artwork that is, in her words, 'useful in social terms'. It is a subversive model that offers both humour and hope to its unsuspecting audience. Cream 3 catalogue, Nancy Spector As part of her artistic work Minerva Cuevas is fond of altering logos, translating social issues into visual and media campaigns, street interventions, supermarket sabotages and the use of free software. The egalit-design has been reproduced as printed matter - posters, magazines, stickers& - for the massification of its message (equality). People used it as part of the demonstrations in Rennes and Montpellier, France, when Le Pen run as candidate for the elections in 2001.

The discontinuous presentation of contemporary art from Macedonia within the international context, particularly the evident absence of Macedonian artists from the latest major international exhibitions such as Sao Paulo, Gwangju and Sydney biennials and Documenta, did not come as surprising news. The locally and nationally oriented cultural politics, the tiny budgets and the continuous changes in the directorship of the main museums in accordance with the shifts in the government give some explanation, but the fact is that there seems to be a lack of genuine interest in art from the East on the international circuit. The fact that the Macedonian artist Oliver Musovik was included in the 6th Istanbul Biennial, 1999, with 'Neighbours 1' and in Manifesta 4, 2002 and the Prague Biennial, 2003 with his project 'Neighbours 2: The Yard' (2002) therefore deserves more attentive analysis. Suzana Milevska. The photographs accompanied with texts, represent sufficient pile of evidence about the complex picture of the Skopje suburb, Dracevo. What happens on the periphery of urban village like Skopje, can be paradigm not only for most of the suburbs of Skopje, but also for the very center of this city. The photos, without textual support, resemble some scenes from the movies of such directors like Wenders or Tarkovsky. However, after fusion of the photos and their corresponding texts, an integral picture is obtained of a de-humanized, unfortunately void of any content, urban milieu, the very picture of a mental and visual post-communist disaster. The ghostlike scenes of the leftovers of some community life openly speak of the total failure of the communist model of thinking, where the basic value should have been the state property. The extreme poverty that is read from these images shamelessly looks us straight into the eyes... Sonja Abadzieva. The series of ink jet prints establishes a kind of site-specific micro-geographical narrative about his working class neighbourhood. While retelling fragments of events and their repercussions on the look of the yard, Musovik produces nonlinear suburban stories structured by the habits, character and often socially dysfunctional behaviour of his neighbours. Although never presenting them directly in the space, he defines their social and cultural background so precisely that these photographs can be seen metaphorically as portraits. Suzana Milevska.