The artists in Dark Matters explore the misty recesses of a dark universe. They show a world that seems to be neither utopian nor dystopian, a place whose nature does not immediately reveal itself. What does this world tell us? Meaning is not given... 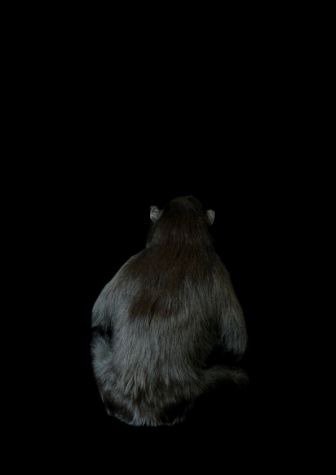 The artists in Dark Matters explore the misty recesses of a dark universe. They show a world that seems to be neither utopian nor dystopian, a place whose nature does not immediately reveal itself. What does this world tell us? Meaning is not given. However, there is room for reflection on our own time and ourselves. Universal themes, such as growth and destruction, good and evil, are depicted in monumental drawings, sculptures, and installations.

Sandro Setola sketches a grim world in his monumental charcoal drawings, animations, and video installations. Universal themes such as isolation, destruction, growth, and decay are common in his work. In his spatial installation 'Retreat (I know I can't win), consisting of a maquette and a projection of an underground-city labyrinth, sombre-looking architecture becomes the bearer of ideas about the mental world, giving an unexpectedly confrontational expression of the emotions and their battles.

Dario D'Aronco often works with sound in dialogue with the spatial environment. In recent years, he has made a series purist, minimalist sound installations inspired by the work of the Italian composer Giacinto Scelsi, who, straight after WW2, wanted to compose music for a new world. Each note should sound the same, because the space and the ears of the listener naturally lead to everyone hearing a different sound. D'Aronco searches for the point where the listener’s ear generates meaning from the purest possible sound. Where image is as absent as possible.

Fiona Weir’s photographs gradually reveal their subject. In her photographs of natural environments or abandoned places, the only visible human presence is in a shadow or a trail in the grass, where culture and nature blend. She is looking for the point where the figure seems to appear on-screen or where it just disappears from view. Her languid, melancholic images seem to have resigned themselves to an existential loneliness.

Silvia B. presents a series of photographs and sculptures in which the circus functions as a world where beauty and disgust, emotion and horror, compete for precedence. Silvia B.'s creatures are both attractive and disturbing: they look human, but are definitely artificial. In the world of the circus, everything is possible and reality hangs by a thread. What is good can be bad, and vice versa; our true self is covered with a thin veneer of civilisation that is easily scratched away.

Renie Spoelstra presents a new monumental charcoal drawing, which she worked on intensively last summer. The wind blown branches of a tree give visibility to the darkness of a deep forest. Spoelstra is not to trying to capture a specific location— she is reducing a concrete image to a universal concept. She looks for the moment when an image is located at a dead point, like the dead point in the swing of a swing, where nothing happens, where threat is palpable in the moments before or after.

Marielle Buitendijk is especially known for a characteristic monochrome painting style for which she uses different spray techniques. Her interest in the sublime has seen her turn to three-dimensional work in recent years. The graphs in which mathematical laws are expressed are often at the root of her three-dimensional wall reliefs, which, although made according to algorithmic mathematical principles, impersonate chaotic growths.

The sound installation 'Rumoer' by Dirk van Lieshout includes manhole covers with radio dramas and soundscapes of bloody revolts and uprisings in Amsterdam's Kattenburg district. Van Lieshout has been commissioned to make this work. The outdoor version will be presented on the Kattenburgerplein at the end of September. Van Lieshout's installations in public space take the (unwritten) rules of a place as a starting point and invite the public to delve therein. Society has an inescapable regulating effect that affects our behaviours; in his work, van Lieshout searches for dissent, making it visible and tangible.

Jeroen Kuster creates made-up creatures from discarded materials using a combination of fantasy and anatomical knowledge. His work turns away from the scientific world and, compared to modern science, makes use of an alternative explanatory model with its own system and method. The utopian organisms and mutated animals resulting from his research have a self-evident quality, obliging the viewer to think about nature and its manipulation in the present age.

Although Charl Landvreugd works as a visual artist, mainly in the fields of sculpture, installation, and video, he has extensive experience as a curator and writer. He has worked in Europe, the Caribbean, and the United States. Both theoretical and practical, his work is always looking for representations of the genesis of a new humankind. In a catchy visual language that mixes science fiction, futurism, kitsch and refined aesthetics, his sculpture speaks about the possibility of colour losing its meaning and of creating an apolitical humanity.

After his successful exhibition at the Groninger Museum in the spring, it was all the more clear that the multifaceted work of Marc Bijl has, for many years, consistently researched— and undermined —the underlying power structures that characterise our contemporary mass culture. Bijl uses rough materials, dripping black epoxy, recognisable logos, and visual elements directly derived from the youth and protest culture. He uses visual language to question the power relations between the individual and society in a time that seems to have forever lost its naivety.

Friday 13 - Sunday 15 Sept: Festival of The World of the Witte de With Quarter & 24hour Culture.

Thursday, 10 October, 20:00: Destination Outer Space – an evening about the infinity of the universe, Afrofuturism, and unexplained phenomena in the solar system.
In collaboration with Govert Schilling, Charl Landvreugd and Marielle Buitendijk.

Thursday, 14 November, 20:00: The Darkness Within – an evening about the fathomless depths of the human mind, irrational occult practices, and the unreliability of memory.
In collaboration with Silvia B. and Sandro Setola.