Gabriele Picco, 'Since 1974': Picco will show a series of new drawings and paintings created during his recent relocation to New York. Through these essential drawings and large-scale paintings, the artist shows us his hallucinatory world. Jacqueline Fraser, 'Luckily you're a born loser and I'm not', 'Clonazepam. New Sculpture and Drawings'. 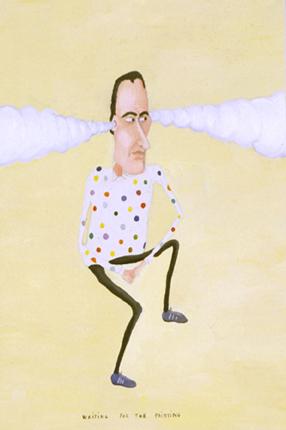 Priska C. Juschka Fine Art is pleased to introduce "Since 1974", Gabriele Picco's first solo exhibition in New York.
The controversial work of this Italian born artist has been recognized by prestigious fellowships such as the Michetti Prize and covered by international art press. His work is included in prominent European collections and exhibited in public spaces. In "Since 1974", Picco will show a series of new drawings and paintings created during his recent relocation to New York.
Through these essential drawings and large-scale paintings, the artist shows us his hallucinatory world. Situated somewhere between caricature and portraiture, Picco's imaginary characters are staged in surreal situations and hilarious daily scenarios. Deceptively nave, Picco's work is really a mix of profound references to the history of art and literature. As short poems, his drawings capture these influences and pleasantly confuse the viewer by presenting a certain uneasiness of understanding.
The sweet brutality of Picco's work asks us to face the irony of the human condition. Topics like sexuality and politics become the objective of his joyful criticism - a unique point about the parody of life. He does this by assembling his different characters around a pathetic situation, a tragic comedy. And to demonstrate that we are all part of this comic condition, Picco includes a number of self-portraits in the most embarrassing situations.
Already recognized for his drawings and paintings, Picco is also a prolific writer. The successful publication of "Aureole in cerca di Santi" (Aureoles looking for Saints) is evidence to the uniqueness of his talent. As a writer, Picco constantly takes notes about the life around him. Armed simply with a pen and a fervent creativity, he tells us about our weaknesses.
"Since 1974" is the visual diary of his new life in New York - a satirical analysis of the fragility of the human condition.

Jacqueline Fraser
''Luckily you're a born loser and I'm not''
''clonazepam''
New Sculpture and Drawings
In the Project Room
October 24- December 8, 2003

Priska C. Juschka Fine Art is pleased to announce that New Zealand artists Jacqueline Fraser has been nominated for the new biennial Artes Mundi Prize along with the following international artists- Janine Antoni.- Tim Davies - Jun Nguyen - Hatsushiba -Lee Bul- Michal Rovner - Berni Searle - Fiona Tan - Kara Walker - Xu Bing .
The Artes Mundi Prize is a new prize, which will recognize visual artists, wherever they are from in the world. Established to celebrate visual culture within an international context, the first Artes Mundi Prize will be awarded in March 2004. Thereafter the Prize will be awarded every two years.
It will focus upon artists who are working with the ideas of human form or human presence and producing work which adds to our understanding of the human condition. The artists have been selected by two internationally renowned curators: Fumio Nanjo, Deputy Director of the Mori Art Museum in Tokyo, and Declan McGonagle, until recently Director of the Irish Museum of Modern Art.
Their work will be shown in a major exhibition at the National Museum and Gallery, in Cardiff, UK from February to April 2004. An award of 40,000 will be given to one of the artists by an international panel. In addition, a Purchase Fund has been established through the Derek Williams Trust, to purchase works for Wales.

The Artes Mundi Prize will be awarded by an international panel of five, comprising eminent artists and experienced curators. The jurors include:
Lisa Corrin, formerly Curator of Exhibitions at the Serpentine Gallery, London and now Deputy Director of Art, Seattle Art Museum, USA- Marlene Dumas, artist based in the Netherlands-Okwui Enwezor, publisher and editor of Nka: Journal of Contemporary African Art and Artistic Director for Documenta 11 in Kassel Germany, 2002- Issey Miyake, artist and designer, based in Japan - Michael Tooby, founding Curator at Tate St Ives and now Director of the National Museum and Gallery, Cardiff, Wales.

Responding to the announcement Priska C. Juschka Fine Art will be showing new sculpture and drawings by Jacqueline Fraser from October 24 - December 8, 2003.

With ''Luckily, you're a born loser and I'm not'' ''clonazepam'' Fraser is introducing us more to a stepped up concept than to a continuation of the show A Clearer Portrait of the Lost Boys '' in eleven parts deftly and eleven details of straining'' at Priska C. Juschka Fine Art in October 2002, which was a continuation of Fraser's installation at the New Museum of Contemporary Art in New York, October 2001 to January 2002, A Portrait of the Lost Boys ''in five parts deftly and six details of straining''.
Today's work is more multi- facetted even: introducing drawings and precious fabrics as a medium, which is standing by itself and not only as support for her elaborate wire sculptures. In turn the sculptures themselves, loose their wire at some time- reaching out to the drawings as an extended medium in a more intricate double- layered way like to the other twin.
Fraser's sculptures have become somewhat more simplified, more reduced to the essence of fabric and shape without abandoning their concept of beauty and fashion. Their message, however, is still as mysterious and demanding as in the Portrait of the lost Boys. Her investigation of what remains unspoken of and what is left in the corners of our societies and in our collective unconscious continues in 2003 with another powerful body of work.

Gallery Hours:Wednesday - Monday: 12 to 6pm. and by appointment.