The Collection seen by Gertrud Sandqvist. On the basis of the dynamic interplay between an approach guided by the idea and one that is attentive to the senses, the curator presents a selection of works predicated on the notion of "elective affinities". To celebrate the Generali Foundation's 25th anniversary. 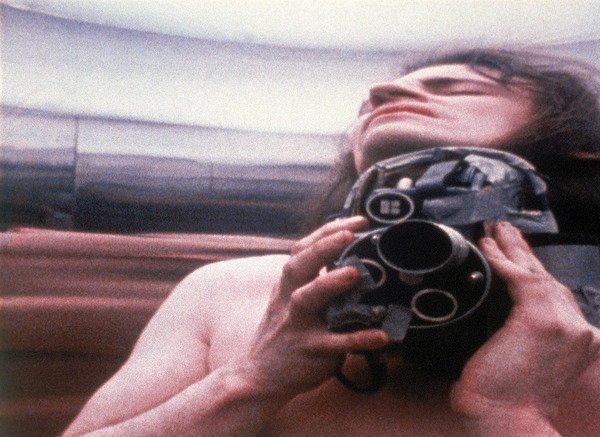 To celebrate the Generali Foundation’s twenty-fifth anniversary, three international curators—Guillaume Désanges, Helmut Draxler, and Gertrud Sandqvist—each composed a show using a unique presentation format to reflect on the Generali Foundation’s collection and exhibition politics, and thereby examining its contribution to historiography on the basis of institutional work. Guillaume Désanges focused on the “pioneer days” of Conceptual art in the 1960s and 1970s; Helmut Draxler highlighted the complex interrelations between the principles of collecting and exhibition making. And the yearlong anniversary program concludes with Gertrud Sandqvist’s exhibition Against Method.

The title of the show refers to Paul Feyerabend’s widely read book Against Method: Outline of an Anarchist Theory of Knowledge (1975), in which the author casts doubt on the scientific ambition to attain knowledge through the application of exact and systematic methods and instead proposes “irrational means” as the basis for experimental research. Scientists, he argues, should follow the principle of “anything goes” and adapt approaches from the arts to facilitate the spontaneous discovery of theories.
Feyerabend’s critique came during the heyday of Conceptual art, when artists, for their part, sought to integrate structuralism and scientific methodology into their work. Although the Generali Foundation focuses on Conceptual art and institutional critique, the works in its collection also manifest all those aspects that the idea of “Conceptualism” would seem to exclude—aesthetics, expression, gesture, physicality, process, or sensations—anything that cannot be completely translated into signs or systems. On the basis of this dynamic interplay between an approach guided by the idea and one that is attentive to the senses, the curator Gertrud Sandqvist presents a selection of works predicated on the notion of “elective affinities.”

A key work in the exhibition is Mary Kelly’s Prototype I, from her Post-Partum Document (1974–79), which documents the artist and mother’s complex relationship with her son during the first years of his life. Kelly chooses a decidedly conceptual scheme and aesthetic (lists, diagrams, samples, etc.) in order to lend structure to a subjective and physical experience covered by a cultural taboo. To avoid the perpetual difficulties that beset the representation of female identity through the depiction of the body, she eschews photography altogether in favor of methods from psychoanalysis (Lacan) and the sciences. Kelly also oversteps the bounds of the artistic agenda by appearing as the privileged interpreter of her own work.

In Elective Affinities/The Truth of Masks & Tables of Affinities (2002), Ana Torfs revives Walter Benjamin’s method in his unfinished Arcades Project, collecting handwritten notes, quotations, and images and relating them to one another. The artist spreads out a “book in the making” on fourteen tables, juxtaposing her own archival material and reading with literary fragments in associative fashion and revealing hidden connections, affiliations, and elective affinities whose matrix is shaped by the intellectual history of the nineteenth and twentieth centuries. The accompanying slide installation explores another kind of kinship by showing one and the same couple, dressed in various contemporary and historic costumes, performing a sociology of the portrait.

Lili Dujourie’s series of videos entitled Hommage à … I–V revolves around a dual regime of the gaze: between staged pose and the voyeur’s prying intrusion. The artist plays out the entire register of exhibitionism—tossing around in bed, she evokes female nudes from art history—but then hides her face and averts her gaze. She is not a passive object of the desiring gaze in these images, but an active agent, the director of her own representation. What Dujourie’s work stages as gestures of intimacy enters into communication with a direct counterpart in Dan Graham’s Body Press (1970–72): a man and a woman, both naked, shielding their bodies with movie cameras, film each other inside a mirrored cylinder, imparting a sense of claustrophobia to the viewer as well. Yet this work is not primarily about sexuality; its true issue is identity, which is perpetually engendered afresh in the complex constellations of the gaze. Andrea Fraser’s video Untitled, by contrast, is the product of an agreement between the artist and a collector, who paid in advance for the video documentary of his sexual encounter with her. Fraser invokes the familiar metaphors of artist/prostitute, gallerist/pimp, and collector/john in an effort to portray the reified relations between the actors in a capitalist art system. Yet she upsets the balance of power by retaining control over her own body and her work of art.

David Lamelas’s Gente di Milano (1970) likewise builds on the gaze of the voyeur and flaneur. The artist points a static camera at the anonymous crowd of passersby to record them as though in an act of surveillance; in a second photographic step, he then captures selected moments. The simile of the artist as a “hunter” who catches his “prey” with the camera is also evident in Heimo Zobernig’s Video Nr. 5 (1991), in which the artist stages himself as a marksman.
Morgan Fisher and Heimo Zobernig undertake empirical studies into the mysteries of color. In his film installation Color Balance (1980/2002), Fisher schematically illustrates the technical processes of color photography and film, creating a surprisingly sensual experience. Zobernig, meanwhile, examines the possibilities of color and the subjective sensations it conveys in Untitled (1987), a series of twenty-eight watercolors on standard-size sheets of paper that yields a sensory as well as systematic survey and demonstrates that the gestural register cannot be entirely eliminated even from abstract painting.

A gesture is neither an abstraction of language nor a sign and yet closely resembles both. Dependent on the body, it articulates what cannot be said in words. Martha Rosler’s video Semiotics of the Kitchen (1975) is a feminist parody of a television cooking show. Gesticulating wildly, the artist demonstrates exaggerated versions of the housewife’s activities and “implements”; her “kitchen alphabet” names a critique of the role of woman in patriarchal society. In Joachim Koester’s film Variations of Incomplete Open Cubes (2011), a man tries to reconstruct the geometric shapes of Sol LeWitt’s eponymous minimalist work (1974), which catalogues all 122 possible variations of open cubes, with his fingers. The attempt to use the body as the “recording machine” of a rationalist conceptual system fails, but it finds an alternative form in a “dance of the hands.” Koester’s work reflects on LeWitt’s observation that “Conceptual Artists are mystics rather than rationalists” and illustrates how attempts at comprehensive rationalization, especially those of Conceptual art, seem doomed to fail.

Conceptual art may be based on the primacy of the “idea,” but as many works by its representative artists illustrate, it also involves much that is object-like and material, physical, sensory, and irrational. The Generali Foundation Collection offers a surprisingly rich reflection of this spectrum of “cracks,” contradictions, and paradoxes within Conceptual art. Gertrud Sandqvist’s presentation nimbly moves in pursuit of its credo: Against Method!

Gertrud Sandqvist is a professor of the theory and history of ideas of the visual arts at the Malmö Academy of Art, Lund University, Sweden. From 1995 to 2007, she was dean of the academy, a post to which she returned in 2011. Between 1992 and 1994, she was director of Galleri F 15 in Norway. In 1989, Sandqvist founded Siksi—the Nordic Art Magazine, which she edited until 1990. She is a founding member of the European Art Research Network (EARN) and was a member of the jury of the German Academic Exchange Service’s Artists-in-Berlin program from 1998 to 2002. She has published widely, primarily on Nordic and European contemporary art.

Publication on occasion of the 25th anniversary of the Generali Foundation. A Book about Collecting and Exhibiting Conceptual Art after Conceptual Art
Eds. Sabine Folie, Georgia Holz, Ilse Lafer