Raymond Moody's Blues. Dreamer,melancholic and optimist, Kunath is an enigmatic presence in the work he creates. For this exhibition he presents an installation of new paintings, sculptures and a video. 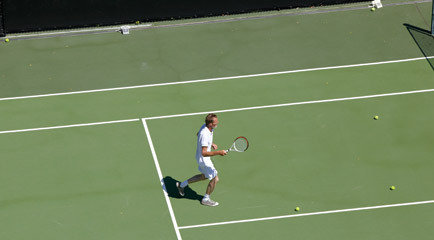 Dreamer, jester, melancholic and optimist, Friedrich Kunath is an enigmatic presence in the work he creates. For his first solo exhibition in a UK public gallery Kunath presents an installation of new and recent painting, sculpture and video at Modern Art Oxford. The exhibition title references Raymond Moody, the American psychologist and medical doctor who in 1975 coined the term ‘near-death experience’. Here, as in all his work, Kunath draws on a myriad of inspirations and sources in a playful balance of joy and melancholy, seeking to evoke a mood he refers to as ‘sad optimism’.

A tennis court of sorts is suggested in the Upper Gallery, with green carpet, a net strung across the space, and line markings dividing the gallery into zones. A cast of characters in related pairs, including sea otters, ghosts and gnomes, sit alongside sculptural objects, such as oversized burnt matches, large brown loafers, and the polyhedron from Albrecht Dürer’s Melencolia I balanced on the nose of a seal.

The paintings that occupy the walls contain imagery sourced from landscape engravings, still lifes and slapstick cartoons, combined to create narrative associations that fluctuate between humour and pathos. The large mural-sized work Life After Life (2013), with its palm trees and blue sky, hints at the tennis court on which Kunath himself plays, but also acts as a ‘blank canvas’, a site for graffiti, and a divide between one realm and the next.

The film You Go Your Way and I’ll Go Crazy (2012) has an ageing LA artist as the central protagonist. Stylish yet forlorn he sails, swims and plays tennis alone. The affluent trappings belie his evident malaise, and the pensive soundtrack, composed by the Calder Quartet in close collaboration with Kunath and Maxwell Sterling, emphasizes the sense of someone unraveling at the seams.

Kunath was born in Chemnitz, East Germany, and after a childhood in Berlin and time working in Cologne he relocated to Los Angeles in 2008. These new surroundings, between the desert and the Pacific Ocean, have further influenced the tone and form of his work, accentuating some of the recurring themes that have long been central to his artistic vocabulary. Kunath has said about the influence of this West Coast environment 'I guess the colours got brighter and the topics got darker. Sunshine and Noir.’