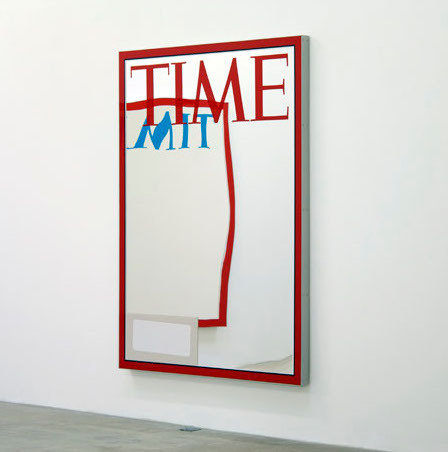 Galerie Frank Elbaz is pleased to announce the first exhibition at the gallery by Los Angeles artist Mungo Thomson. Thomson’s work in various media (film, sound, sculpture, publications, and photographic wall murals) explores backgrounds, negative space and atmospherics–whether material and phenomenological or social and historical. His artworks approach perception and cultural mediation with economy and wit, and often rely on existing forms of recognition and distribution.

The exhibition will feature a number of new works by the artist, including several mirror works from his ongoing series TIME, and several sound sculptures from his ambitious orchestral project Crickets.

Thomson’s TIME mirrors are person-sized, silkscreened mirrors bearing the iconic logo and red border of the international weekly news magazine TIME. The mirrors are based on individual covers of the magazine that reference cultural or cosmological notions of time, history, perception and encounter. Installed together, they form kinesthetic configurations and infinity spaces in which the viewer, the viewing context and other mirrors are reflected and reversed endlessly. The mirrors on view in the exhibition are based on covers devoted to cosmology and the science of meditation (“Unlocking the Secrets of the Universe”; “Meditation: The Answer To All Your Problems?”).

Thomson’s Crickets is a musical score for orchestra based on the sound of crickets. It is transcribed from a French compilation of field recordings of crickets from around the world. A 17-player classical ensemble simulates these sounds in a live performance and an HD video. Thomson also recorded a series of instrument ‘solos’—recordings of individual performers impersonating the chirp of a single cricket—that play on small speakers, indoors and out. These “solos” will provide a musical accompaniment for the meditation mirrors, and, like them, form a new and unique ensemble configuration.

A new 200-page hardcover monograph of Thomson’s work, Time, People, Money, Crickets, published by SITE Santa Fe and Contemporary Art Gallery, Vancouver, will be available at the gallery. A book of the musical score for Crickets is forthcoming from Christoph Keller Editions and JRP|Ringier.