Drawing From Nature. The departure point for his work is the observation of traces left by the human patina in the everyday urban milieu. Found on walls, sidewalks, gateways and doorways, these traces are photographed and chosen for their composition and power to evoke. 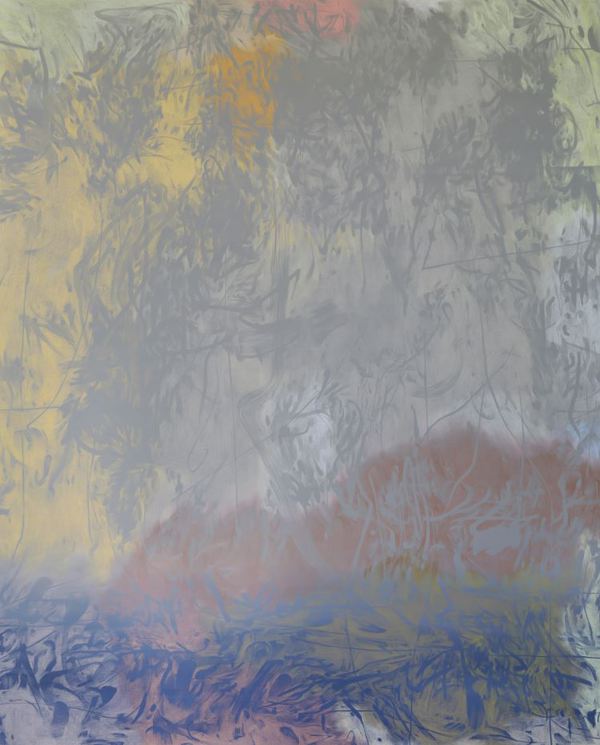 Galerie Karsten Greve is pleased to present the exhibition, Drawing from Nature, the first personal exhibition devoted to Raúl Illarramendi. The work of this artist is born of a reflection upon the possibilities of representation through drawing and its limits. Raúl Illarramendi has always been interested by this discipline that allows him to give form to an entity and to examine its figurative potential. The artist sustains an ambiguous relationship with painting, where the status of drawing is constantly threatened, notably by the formats and the subjects he chooses to address. By presenting works that come from very different series, Drawing from Nature allows the public to discover the artist’s approach through works produced between 2009 and 2013.

The departure point for Raúl Illarramendi’s work is the observation of traces left by the human patina in the everyday urban milieu. Found on walls, sidewalks, gateways and doorways, these traces are photographed and chosen for their composition and power to evoke. The artist thus accumulates a repertory of images that serve as inspiration for his compositions. These signs multiply and proliferate daily, and are endlessly superimposed; however, their ubiquity along with an unconscious collective desire to forget them, render them invisible. It is a matter of bearing witness to these gestures, creating an imaginary history of events, a portrait of the past that never was. At the same time, Raúl Illarramendi’s work comes within the scope of abstract and figurative research. We can speak of a genuine fiction: his drawings are not a literal transcription of photographic documents, but a realistic reconstitution of the impressions these images have made on him.

Many of the exhibited works belong to the series entitled EA, an abbreviation for Evidence of Absence, while two of the works come from the latest series entitled SD, Spit Drawings. These works have been done with coloured pencil applied on a canvas that has previously been prepared with gouache, a mixed technique that combines drawing with painting and vice versa. The artist conceives these works as non-drawings: the work is composed of lines that suddenly appear in the un-pencilled spaces, thus revealing the foundation of the canvas. This procedure in negative allows the artist to decontextualise the traces left by more or less civilised actions and to detach and isolate them, placing them in the foreground of the canvas.

Raúl Illarramendi’s work invites ambivalence between matter and non-matter. It is through drawing that he achieves an enhancement of his trivial, even abject subjects, which gives an ethereal craftsmanship to his paintings. This involves a balance between the terrestrial and the celestial, which makes Raúl Illarramendi’s works particularly moving: the visitor is thus projected into a suspended world, where colours blend softly, soothed by nuances. These are in fact, eminently graphic works that nevertheless contain very explicit pictorial elements: in some of his productions the artist chooses unexpected palettes, in others he opts instead for chromatic harmony.

The exhibition likewise presents an older series, done with graphite pencil on paper. DFN, an abbreviation for Drawing From Nature, is a series of four drawings featuring the Mont Saint Victoire, a celebrated leitmotiv in Paul Cézanne’s paintings, and a collection of six drawings showing Marcel Duchamp’s Fountain, addressed from different points of view and imbued with the shapeless. In this work, the reflection on the potential and limits of drawing attains its apotheosis: the frontier between figure and matter, between the real and its reproduction is thrown into question. Drawing is no longer in the service of form: the silhouette imposes the contour of the drawing, which develops in a free and fluid manner that is almost liquid in its interior. Graphite represents its own dissolution, its own abstraction and leads us to an assumed lyricism. Magnetised by the contrasts between the white of paper and the black of the graphite and hypnotised by the movements evoked by the drawing, the spectator escapes from the present. Compelled to seek concrete forms that are not, the eye gradually becomes familiar with these sculptural drawings that lead to an époché of perception, where all prejudice is suspended.


Born in 1982 in Caracas, Venezuela, Raúl Illarramendi began his artistic training in 1998 as assistant to the painter Felix Pedromo. He then became a member of the Circulo de Dibujo of the Contemporary Art Museum of Caracas Sofia Imber. He followed studies in Visual Arts and Art History at the University of Southern Indiana in Evansville in the United States. He has won several art awards in the United States and France, the most recent of which being the Jean Chevalier Award for Painting in Lyon, which he received in 2012. He lives and works in Méru, France.