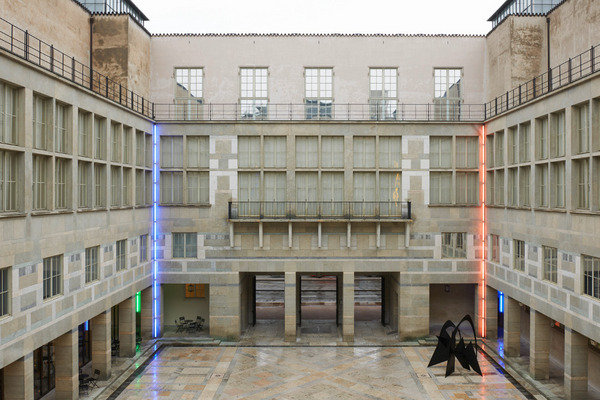 Piet Mondrian, Barnett Newman, and Dan Flavin are three eminently important modernist artists and representatives of three different generations. They dedicated themselves to abstract art, but each did so under very different spiritual and social premises. The exhibition unites three selfcontained solo presentations. The chronological arrangement highlights revealing analogies as well as contradictions between the oeuvres—an organic panorama of artistic developments emerges, bristling with energy.

The point of departure is marked by dense painted panels, almost icons, that Piet Mondrian (1872–1944) created in Paris starting in 1919. The artist confined himself to the use of horizontal and vertical lines and the three primary colors red, yellow, and blue as well as the non-colors black, white, and gray. Mondrian called his form of abstraction “New Plasticism” and explored its application to all domains of life, aiming to reveal the “pure vision of the universal”.

In a programmatic assessment of Mondrian’s art, Barnett Newman (1905–1970) said that its representative illustration of the mathematical equivalents of nature transported the beholder into a world of flawless sensory lucidity. Newman wanted to release color from its compositional subordination and all other principles. This liberating expansion of color into sometimes gigantic pictorial formats aimed to convey a metaphysical exaltation Newman suggested with the term “sublime”.

Dan Flavin (1933–1996) decided in the early 1960s to eschew painting and sculpture. He adopted a factual stance and made his light installations by combining off-the-shelf fluorescent tubes. The repetitive use of these elements is formly committed to everyday life and industrial production; despite the magic of light they radiate, his works negate the overarching metaphysical dimension that unites Mondrian and Newman.

The Kunstmuseum Basel has central works by all three artists. These familiar pieces form the backbone of the exhibition, complemented by carefully selected significant loans from important museums and private collections in Europe and the United States.

Press conference and preview of the exhibition on Friday, 06 September 2013, at 11 a.m.