Presenting a constellation of contemporary artists as temporary travelling companions, this exhibition thematizes the current state of constant mental and physical displacement, the condition of transcendence of media and horizons. 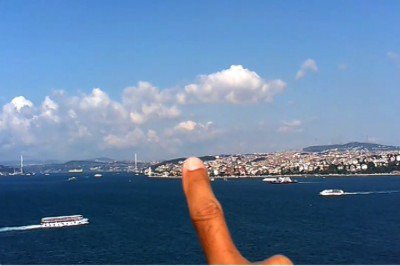 "Every point is a relay and exists only as a relay. A path is always between two points, but the in-between has taken on all the consistency and enjoys both an autonomy and a direction of its own. The life of the nomad is the intermezzo. Even the elements of his dwelling are conceived in terms of the trajectory that is forever mobilizing them."
Deleuze & Guattari, A Thousand Plateaus

"We are all indefinite human beings, perpetual travellers, tourists of infinity, intellects of the unknown. One can stay in his room or studio, and still travel a lot."
Pascale Marthine Tayou

How could the social, philosophical and even economic and political anarchistic concept of the Perpetual Traveller possibly be understood in the context of artistic practice in our contemporaneity?
At its base, the concept of the Perpetual Traveller, which historically posits a vision of individual sovereignty and detachment from social bondage, confinements of the nation state and all the paraphernalia that uphold such a structure, is a strive to liberate the self through a kind of constant displacement, i.e. travelling. This act of travelling, which is to be understood in both a physical and even foremost mental sense, constitutes a radical social phenomenon that questions preconceptions of cultural identity, legality, authenticity, nationality and familiarity. By performing the practice of the Perpetual Traveller, the individual literally embraces the trajectory of instability and provisionality, and catapults him-/herself beyond the norm, into the state of self-chosen outsiderness, into the state of self-ownership and libertinism.
Many present-day artistic practices exemplify this idea. The physical studio is no longer a privileged site for artistic production. The very idea of ‘physical studio’ is ever more abandoned in favour of the so-called ‘mental atelier’ or, in Daniel Buren’s terms, ‘studio in the head.’ The artist intervenes in or “comes in between” pre-given, specific conditions—be it the public realm, the exhibition or the studio—the circumstances out of which the artwork is developed. This ‘post-studio condition’ is actually close to the ‘post-medium condition’, where artistic activity is no longer necessarily connected to one specific medium, but takes shape within “an expanded but finite set of related positions for a given artist to occupy and explore” (R. Krauss).
Presenting a constellation of contemporary artists as temporary travelling companions, this exhibition thematizes the current state of constant mental and physical displacement, the condition of transcendence of media and horizons. Detached from their geographical roots, the artists (or their virtual surrogates) appear as perpetual travellers, as residents of incessantly alternating places and modes. Both their personal life and their works created along the way are mostly situation-based and delicately combine precarity and autonomy.
The questions at stake, which do not necessarily necessitate an answer, are what can be deduced from artistic practice and its products in this day and age, when put under the loupe of a hefty concept like Perpetual Traveller, and what are the existential and philosophical conditions that prerequisite and frame such mental and physical existence.