P is for Poodle. A series of paintings that were completed with neon sprayed on denim material. In the second space is presented a group of fragments from the virtual 1984 Miss General Idea Pavilion. 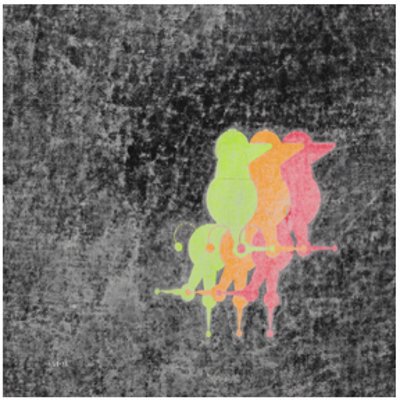 P is for Poodle will present a series of six poodle paintings that were completed with neon sprayed on denim material. In the second space, a group of fragments from the virtual 1984 Miss General Idea Pavilion relating to the image of the poodle will be presented in vitrines.

In an interview AA Bronson said of the image of the poodle:
“We came to it as a rejected image that nevertheless had many meanings already attached to it; like the "French poodle," the fag hairdresser poodle, and it also happens to be a hunting dog.”
– Journal of Contemporary Art

General Idea worked together as a group until the death due to AIDS of Felix Partz and Jorge Zontal, two of its founding members in 1994. Since then, AA Bronson has been the caretaker of their legacy. In 2006, Kunsthalle Zürich presented a major exhibition of their work, and more recently, in 2011 and 2012 respectively, there have been important retrospectives at Musée d’Art moderne de la Ville de Paris and the Art Gallery of Ontario, Toronto. In 1989, Esther Schipper inaugurated her gallery with a solo exhibition of General Idea and since then they have been part of the gallery programme.

The exhibition P is for Poodle is a collaboration between Esther Schipper and Mai 36 Galerie, Zurich.

You have received this email because your e-mail address is part of our distribution list. If you no longer wish to receive information regarding projects managed by David Ulrichs PR, please reply with ‘unsubscribe’ as header.