The Imaginary of the Ocean Deep. 150 contemporary and historic artworks that explore how the deep has been imagined by artists, writers and poets through time and across cultures. 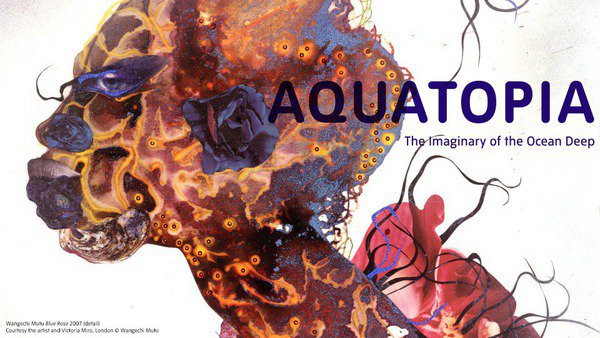 This major exhibition brings together over 150 contemporary and historic artworks that explore how the deep has been imagined by artists, writers and poets through time and across cultures. Its briny depths are populated with ancient sea monsters and futuristic dolphin embassies, beautiful sirens and paramilitary gill-men, sperm whales and water babies, shipwrecks and submersibles, giant squid and lecherous octopuses.

Ninety percent of the Earth’s oceans remain unexplored. Science knows more about outer space than the ocean deep. Scores of ‘new’ species, weirder than any fiction, are found each time a submersible descends to the ocean’s deepest trenches.

In the absence of knowledge the deep is a site where the imagination has full rein. The ocean has always bred monsters, and like outer space has been a setting for science fiction since Jules Verne’s 20,000 Leagues Under the Sea. But unlike outer space, the oceans are part of our own planet – and by extension a part of us too.

Throughout recorded history the deep has been the site of shared myths, subconscious fears and unnamed desires. Aquatopia, then, is less about the ocean as it actually is and more about how it lives within us. But our wild imaginings about the ocean aren’t simply escapist. The ocean is the keeper of political histories that continually resurface in the present day. Ocean myths both ancient and modern have been shaped by conquest and colonialism, and more recently by the tide of gender politics.

Featuring important and iconic paintings, drawings and sculptures by artists including J.M.W. Turner, Marcel Broodthaers, Oskar Kokoschka, Barbara Hepworth, Odilon Redon, Lucian Freud and Hokusai, amongst others, Aquatopia also includes video, performance, sculpture and painting by more recent figures in contemporary art, such as Mark Dion, Spartacus Chetwynd, Steve Claydon, Juergen Teller, The Otolith Group, Mikhail Karikis and Wangechi Mutu. Occupying all of the spectacular galleries at Tate St Ives, the exhibition is presented at the very edge of the ocean, overlooking Porthmeor beach and the restless Atlantic beyond.

The art in Aquatopia has strong links with powerful literary archetypes, including The Odyssey, The Tempest, The Ancient Mariner, Moby Dick and 20,000 Leagues Under the Sea. The richly illustrated catalogue, published by Tate St Ives and Nottingham Contemporary, includes newly commissioned and recent critical essays by leading thinkers and writers on the sea, including Philip Hoare, Marcus Rediker, Marina Warner, Kodwo Eshun, Simon Grant, David Toop and Celeste Olalquiaga, as well as a selection of classic literary extracts and texts (available from the Tate St Ives shop for the special exhibition price of £19.99).

An exclusive limited-edition print has also been commissioned to coincide with Aquatopia.Thames and Thames and Thames and Thames (Japanese Orange) by Steve Claydon is an edition of just seventeen at £395 (unframed). To order, please call 01736 796 226 or download an order form. A version of the print is also available in black squid ink from Nottingham Contemporary.

For further information on the exhibition and for images, please contact Arwen Fitch: 01736 792185 arwen.fitch@tate.org.uk