Judith Hopf presents a new film together with a series of sculptures. Her work focuses on how our social environments shape us, influence us, and by extension thereby exclude us from ourselves. Benjamin Senior exhibits a new body of figurative paintings typically depict women engaged in sport or exercise. 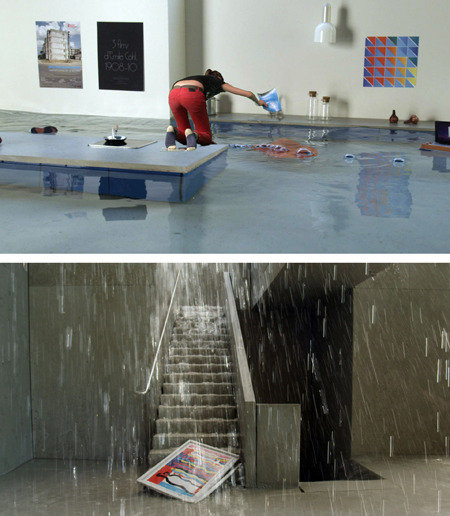 Studio Voltaire presents a new film commission by Judith Hopf together with a series of sculptural works, made specifically for the exhibition. This exhibition is the artist's first solo show in a UK public gallery.

Hopf’s work focuses on how our social environments shape us, influence us, and by extension thereby exclude us from ourselves. Hopf uses a wide variety of techniques such as sculpture, installation, film and performance, often engaging subjects and materials that can be found in the immediate environment.

In her recent installations for Documenta 13 a series of masks were formed from computer packaging and drinking glasses balanced to create a precarious bamboo forest. Such an approach can be thought of in connection to Bricolage, revealing a socio-political order latent in ready-to-hand materials.

For her presentation at Studio Voltaire, Hopf will create a new film work drawing upon references to silent cinema and feminist film material from the suffragette era. An environment will be built in the gallery to house the film accompanied with a series of sculptural works taking the form of a ‘flock’ of concrete sheep.

Following on from her commission for Frieze Film Some Ends of Things (2011) depicting an egg-person wandering around the hallways of a modernist building, Hopf’s new work will also take the architecture of a modernist home as its context. In this new work Hopf recreates a narrative from the suffragette film Le Bateau de Léontine (1911) in which a girl is shown in the rebellious act of flooding her family home, sailing a toy boat in the floodwater apparently oblivious to the resulting chaos around her. The pleasure taken in this rebellious action reinstates the power of the individual to open a gap in social hierarchy. In Hopf’s work contrasting elements of a pristine modernist architecture and the free-flowing, anarchic force of water merge in the space of the film. Staging her work in a domestic environment Hopf powerfully conveys how emancipatory possibilities of desire and action may be pent up, waiting to brim over in the most everyday scenarios.

This exhibition is a part of Not Our Class, Studio Voltaire's programme of commissions and education projects that through research and practice take the work of Jo Spence as a starting point for investigating the legacy and potentials of her work in relation to contemporary culture and life.

For his first solo exhibition in a London public gallery, Benjamin Senior will present a new body of paintings. Senior's figurative paintings typically depict women engaged in sport or exercise. Recent works have featured a formal play of rhythms, false symmetries and colour relationships. This sense of play continues within the frame of the picture as athletic figures and the patterned interiors or landscapes they occupy fuse into one with the flat surface of the painting. There is a voyeuristic aspect to Senior's work as viewers become self-consciously aware of the action of their own gaze, as Dan Coombs recently noted:

"The impeccable clarity and compositional order of Senior's work invites us into what at first seems an uncomplicated and highly pleasurable relationship with his paintings. We are able to gaze upon lovingly rendered female bodies that are unaware of our presence and engaged in absorbing activities, but as we look further we encounter schisms within the compositions which disrupt the easy flow of our vision. In disrupting our vision, the subtle schisms suddenly make us aware of our own act of looking - we become self conscious - and suddenly we find that the painting seems to be gazing back at us." (Dan Coombs 2013)