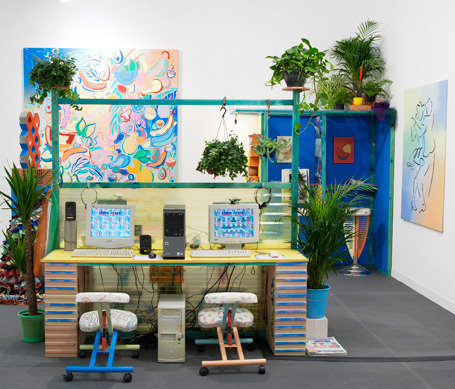 In October 2015, Studio Voltaire will present La Escuela del Sur, an ambitious new commission by Venezuelan-born artist Sol Calero. It will be Calero’s largest commission to date and her first exhibition in a London public gallery.

Stemming from her South American heritage and migration to Europe, Calero’s practice constructs social spaces that investigate themes of cultural representation and national identity. Through architectural environments and an expansive painting practice, Calero considers how representation is constructed and scrutinises the mediation of the Latino ‘Other’.

Her colourful installations and carefully selected palette conjure ‘tropical’ environments which self-critique their own aesthetic, questioning the notions of origin and marginalisation. Her playful installations have previously hosted Salsa classes, a hair and nail salon, and an Internet cafe.

La Escuela del Sur (The School of the South) takes its title from Uruguayan artist and art theorist Joaquín Torres García’s text of the same name. Torres García is considered the father of Latin American Constructivism. In 1935 Torres García published La Escuela del Sur, in which he proposed an autonomous art movement in Latin America that would invert the traditional hierarchy of art by placing Latin America before Europe. Later he established Taller Torres Garcia, a progressive educational art community that could be considered in the tradition of Bauhaus, its fundamental aim was to develop a distinctive Latin American artistic language based on constructivist theories.

For her commission at Studio Voltaire Calero is working in-residency in the gallery for five weeks, transforming the space with a large-scale architectural installation. In the late 1800s Studio Voltaire’s main gallery functioned as a Mission Hall and Sunday School, Calero will use this as a point of departure to create an interior based on a school. Her ‘Caribbean style school’ will host classes and workshops with a number of local groups as well as a series of discursive events on issues surrounding Latin American art, migration and globalisation.

In advance of Calero’s commissioning period at Studio Voltaire, the artist has conducted research to investigate social subcultures of migrant communities in the gallery’s surrounding area. The intended outcomes form part of Calero’s participatory practice and will involve in particular the Portguese-speaking communities of Stockwell, the largest in Europe outside of Portugal.

Studio Voltaire’s interior will undergo an unprecedented transformation, including a raised viewing platform and a freestanding classroom. Customised school furniture, wall paintings and changeable blackboard murals will fill the space and double-up as tools for classes. Calero’s architectural interventions are designed to allow the space to fully function as a social setting. Her playful environments and exotic aesthetics underlie the serious socio-political issues of cultural conformity and the construction of individual and collective identity.

About Studio Voltaire:
Studio Voltaire is a leading independent contemporary arts organisation that exists to support artistic practices and create a space for thinking, experimentation and reflection; its main activities are the provision of affordable studios, a renowned programme of exhibitions, performances and commissions, and a pioneering education programme. Upcoming exhibitions include: Sharon Hayes, The Neo Naturists and Jamian Juliano Villani. In January 2016 Ed Webb-Ingall will present a collaborative project at Studio Voltaire. Working with young LGBT adults, Webb Ingall will host a series of workshops and symposia which will feed into the making of a single screen video.