The exhibition of approximately 50 projects provides a comprehensive panorama of his practice and research which spread over the past 20 years. The show aims to emphasize the live and organic dimension of the artist's propositions. In Espace 315 a monumental installation by the artistic duo Daniel Dewar and Gregory Gicquel, winners of the 2012 Prix Marcel Duchamp. 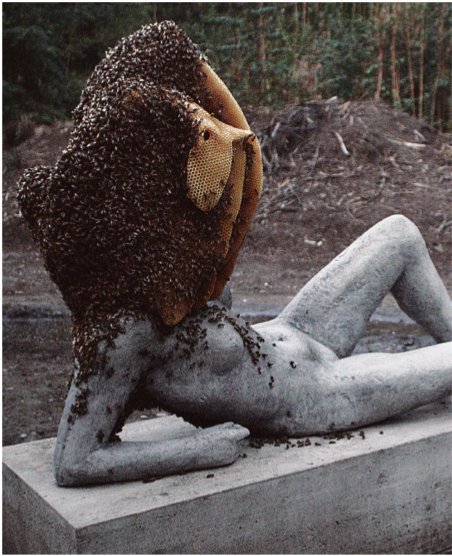 The Centre Pompidou presents the first retrospective exhibition of the work of Pierre Huyghe a major figure in the contemporary art scene both in France and internationally.

The exhibition of approximately fifty projects adopts a completely new approach to the artist’s work, and provides a comprehensive panorama of his practice and research which spread over the past twenty years. The show aims to emphasize the live and organic dimension of the artist’s propositions, where the exhibition space is conceived as a world in itself, not orchestrated, but living at its own pace.

Pierre Huyghe was, from the Nineties onwards, a key figure in redefining the status of the art work and the exhibition format, sometimes joining them in the form of a diary, a journey to the Antarctic or an annual calendar in the shape of a garden.

While presenting some of his most iconic works, such as Blanche Neige Lucie, No Ghost Just a Shell and Streamside Day, the exhibition explores the recurrences and junctions that appear in certain works, and shows how the artist seeks to invent «live situations» through which he strives to intensify the presence and vitality of reality.

«I am interested in constructing situations that take place within reality [...] I focus on something that is not played, but which exists in itself. I seek not to identify the relationship between subjects, but to invent initial conditions that lead to permeability. What interests me is intensifying a presence, giving it its own presentation, its own appearance and its own life, rather than subjecting it to pre-established models.» Pierre Huyghe

Thus, for The Host and the Cloud, Pierre Huyghe summoned a number of witnesses to the deserted Museum of Traditional Arts and Crafts to discover a number of events which took place during Halloween, Valentines’ Day and Labour Day. He staged different situations such as a trial, hypnosis sessions, choreographies and sexual acts. For Documenta 13 in Kassel, visitors accidentally discovered his site, a built ecosystem where one could find a dog with a pink leg, an uprooted oak of Joseph Beuys and a sculpture of a reclining naked woman whose head was obscured by a beehive. The exhibition space in the South Gallery opens to the outer world as an outgrowth, where certain organic and climatic works by the artist will exist.

With the artist’s participation, this presentation represents a stage in this singular body of work – a first step towards a future permanent site of Pierre Huyghe’s concerns and obsessions, based on the idea of constructing a self-generating world which varies in time and space, indifferent to our presence.

From 25 September 2013 to 6 January 2014, the Centre Pompidou is hosting an exhibition in Espace 315 by the artistic duo Daniel Dewar and Grégory Gicquel, winners of the 2012 Prix Marcel Duchamp.

The event is being staged in partnership with ADIAF (association for the international dissemination of French art) as part of the Prix Marcel Duchamp, awarded each year to an innovative artist in the French scene.

Daniel Dewar and Grégory Gicquel met in 1997 at the Fine Arts School in Rennes, and ever since then have been developing a joint approach based on personal experimentation (often pushed to the extreme) with traditional sculpture and craft materials, applied to various themes reflecting their interests of the moment. The artistic core of their work thus lies in the worlds of music, fashion, non-Western cultures, ornamentation processes and ideas of taste and beauty – with all the relativism such notions imply. They have made a name both within and outside France through monumental installations imbued with a touch of Pop, involving spectacular staging that often tests the limits of the institution concerned.

For Espace 315, the duo have produced several large pieces using some of their favourite techniques: tapestry, ceramics, direct carving and painting on silk. Entitled "The Hall", the installation is designed to reflect the architectural features of Espace 315, prompting an encounter between viewers’ bodies and these monumental works. Some are ornamented by motifs with a decidedly puzzle-like character, chosen for both their plastic and symbolic qualities.

The exhibition is accompanied by an album with texts by Jean-Pierre Bordaz and Dorothée Dupuis. The book, containing reproductions of previous works, will mainly focus on pieces produced for the Prix Marcel Duchamp exhibition, with detailed views.

Daniel Dewar and Grégory Gicquel (born respectively in 1976 in the Forest of Dean, UK, and in 1975 in Saint Brieuc, France) live and work in Paris. They are represented by the Loevenbruck gallery in Paris, and the Graff Mourgue d’Algue Gallery in Geneva, Switzerland.

Founded in 1994 and chaired by Gilles Fuchs, the ADIAF (association for the international dissemination of French art) is a group of 300 contemporary art collectors with an intense commitment to the exploration of creativity in the French scene. Every year the Prix Marcel Duchamp, created by the ADIAF in 2000, is awarded to one of four nominee artists, born or resident in France and working in the plastic and visual arts : installation, video, painting, photography, sculpture and so on.

In the space of thirteen years, it has acclaimed nearly sixty of the most innovative rising artists. It has been supported from the start by a key partnership with the Centre Pompidou, and is now one of the most prestigious prizes in the world of contemporary art.

The Prix Marcel Duchamp is supported by Lombard Odier, Sothys, Fondation d’Entreprise Hermès, Artcurial, Inlex IP Expertise.
With the collaboration of CreativTV.
With the participation of The Loevenbruck gallery.