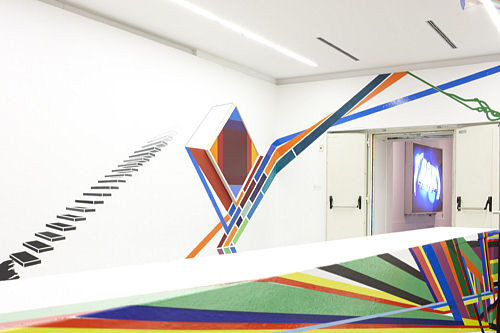 Nic Hess creates a setting for American art from the Daimler Art Collection:

Ever since the late 1990s, Nic Hess (*1968 Switzerland, lives in Zürich) has been using industrial paint, collaged images and colored tapes, light projections and neon elements to take possession, both intellectually and in real terms, of walls and ceilings - and of entire rooms. The artist takes logos from the commercial world (deployed in symbolic excerpts and in an alienating manner) and icons from art history and political and economic phenomena, and uses his pictorial language, which drifts freely between abstraction, ornamentation and figuration, to compose a unified visual choreography. For this purpose Nic Hess adapts contemporary phenomena in the political, art-historical or economic context - never without a touch of humor or a critical subtext.

The exhibition at Haus Huth represents a further step in this direction: In collaboration with Renate Wiehager, Nic Hess will stage an exhibition on Abstract art in the USA from 1950 to the present day. Thereby Hess not only creates a drawing installation in a site-specific manner, which responds to the architecture of the Daimler Contemporary space, but for the first time also reacts on contentual assumptions and curatorial specifications.

Until the mid-1980s, the European avant-garde provided the primary focus for the Daimler Art Collection. This was to change in 1986, when Andy Warhol was commissioned to create the series of images entitled CARS. The collection has since become increasingly open to American contemporary art. The focus is twofold: on the one hand, tendencies in abstraction and in minimalist and reduced art - from the 1950s to the present day - and, on the other hand, Pop Art, Conceptual art and pieces reflecting critical attitudes to art institutions. Our first exhibition on this theme presents a cross-section of artworks: it begins with Josef Albers' early years in America and the work of his students, and goes on to include the Los Angeles 'Abstract Classicists' school and the 'Washington Color School' to Peter Halley and the artistic scenes of the 1990s, concluding with the recent contemporary tendencies.