After the success of the Italian Factory show during the Venice Biennale, Marco Petrus for his first solo exhibition in Britain presents a new project based on the industrial architecture of London. An original look on the heart of London's urban landscape. 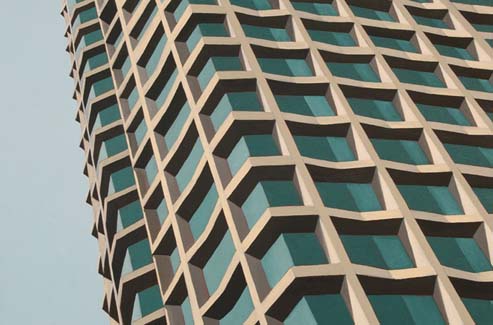 An architect by training, Petrus's painting of the last two decades has centred around the rigourous geometry of the urban landscape, depicting turn-of-the-century architecture either as isolated structures or as part of a teeming cityscape. Milan's rationalist architecture of the fascist period and the historic monuments of the reconstruction era, such as Gio Ponti's Pirelli skyscraper or BBPR's Torre Velasca, are a particular focus of his work.

Although buildings are the main vehicle for Petrus's art, his interest lies beyond the mere structure of his subjects. His approach is more psychological than his background in architecture would suggest and his buildings take on human properties as if they were part of the sentient world. "Architecture interests me as a living body, and my approach to Muzio's or Terragni's buildings [two rationalist architects from the 1930s and â€˜40s] is no different to the one I would have in painting a still life or a portrait". This fixation on the more human aspect of modern cityscapes is manifested in his obsession with the transformation of old industrial quarters into stylised residential quarters inhabitated by the affluent.

Petrus' creative process has been consistent over the years. He starts out with photographs taken from the base of a structure. Having selected the right image, he sifts it, subtracting every unnecessary detail or sign of human activity. He is scrupulous in revealing every detail of a building's structure, from its geometry to the tonal quality of the shadows it projects. Indeed, this ability to imbue each of his subjects with its unique identity is one of the most striking features of his work.

London Suspended is Marco Petrus's first solo exhibition in Britain. Despite his claim to lack a deep knowledge of London's architecture, Petrus has successfully gauged the character of the city in his depiction of, for example, the iconic Battersea Power Station or an anonymous council estate in Croydon. Painted from a low vantage point, the majesty of his buildings dwarves the viewer as if standing in the shadow of a skyscraper on a sunny day. Jean Baudrillard once wrote that â€˜architecture is a tangle of nostalgia and extreme anticipation'. This vision of architecture neatly encapsulates Marco Petrus's work as he grapples with the structural elements that constitute the heart and soul of London's urban landscape.

Marco Petrus belongs to a group of artists known as the Italian Factory: a new generation of â€˜academic' artists at the forefront of contemporary art in Italy. Petrus is currently exhibiting in Italian Factory, the new Italian scene curated by Alessandro Riva at La Biennale de Venezia's 50th International Art Exhibition and in a major exhibition in Strasbourg to celebrate Italy's Presidency of the EU.

London Suspended will be accompanied by an illustrated catalogue, published by Charta, with an introduction by Beppe Severgnini.

Exhibition open Wednesday to Saturday 11am to 6pm or by appointment.