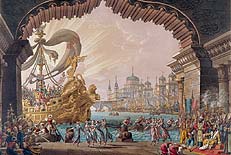 La Scala is the Van Gogh Museum's first exhibition devoted to nineteenth-century opera. It tells the history of this legendary opera house in a presentation featuring around 200 objects, including set designs and costumes.

La Scala is the popular name of Teatro alla Scala, the internationally renowned music theatre founded in 1778 in Milan. The theatre takes its name from the former church of Santa Maria alla Scala that once stood on the site. The building was designed by the neoclassical architect Giuseppe Piermarini (1734-1808).

Besides providing a stage for performances, La Scala has pioneered innovative set design since the eighteenth century. Scenography remained an Italian preserve until well into the nineteenth century. Famous operas such as Madama Butterfly and Turandot, that celebrated their greatest triumphs in La Scala, owed much of their success to the enormous historical and technical knowledge and inventiveness of the Italian set designers. Who they were, where they found their ideas and the ways they devised to seduce their audiences is the subject of this autumn show at the Van Gogh Museum.

Colonialism helped induce a fascination for the exotic in Europe in the nineteenth century. Orientalism, for example, influenced many branches of art, with artists drawing inspiration from eastern cultures. The emphasis in this presentation is on the design and execution of operas set in distant, exotic countries, such as Egypt (Aida), Japan (Madama Butterfly) and China (Turandot). Apart from set designs, exhibits include opera costumes, with some from the 1926 premiere of Turandot, and memorabilia reflecting the history of a theatre that still remains as active as ever.

Eastern influences also played a major role in the visual arts. Like many nineteenth-century artists Van Gogh was fascinated by Japan. Together with his brother Theo he collected Japanese prints which poured into Europe after the country was opened up in 1854. These prints coloured Van Gogh's image of Japan and provided a source of inspiration in his paintings. In this exhibition his Courtisan (after Eisen), from the Van Gogh Museum collection, underscores the link to the theme of the Orient.

Particular attention has been paid to the design of the exhibition. Dutch architect Paul Toornend was commissioned to design the show, which includes fragments from various operas.

The exhibition was compiled by guest curators Vittoria Crespi Morbio (Museo Teatrale alla Scala, Milan) and Joke van Pelt (Theater Instituut Nederland, Amsterdam). The objects on display are from the Museo Teatrale alla Scala, various other Italian museums and private collections. La Scala will appear in New York at the Dahesh Museum of Art, from 2 March to 30 May 2004.

Publication
The accompanying publication is a special edition of the art magazine Kunstschrift on the theme Grand passions and distant vistas. La Scala, the opera and the Orient, 1780-1930, with contributions by curators Vittoria Crespi Morbio and Joke van Pelt, Andreas BlÃ¼hm (Van Gogh Museum), MariÃ«tte Haveman (Kunstschrift) and Anna Buruma (freelance costume historian). Kunstschrift 5 is published on 10 October 2003, 56 pages, price Â¤ 8.70, available in Dutch and English at the Van Gogh Museum and via www.vangoghmuseumshop.com. The Dutch edition is also on sale at leading Dutch bookshops and branches of Bruna.

Expressionist prints and drawings from the Hamburger Kunsthalle

This autumn the Van Gogh Museum will show a selection of works by German Expressionists on paper. From Kirchner to Beckmann focuses on Die BrÃ¼cke, as well as showing work by leading artists not part of this group. Around 80 drawings and prints, all from the Hamburger Kunsthalle collection, provide an excellent survey of this influential early twentieth-century artistic movement.

While elsewhere in Europe Fauvism - the French form of Expressionism - and Cubism were emerging, a group of young, self-taught artists came together in Dresden in 1905 under the name of Die BrÃ¼cke. They drew inspiration from primitive cultures and they were influenced by painters such as Gauguin, Munch and Van Gogh. The latter was often considered to be the first Expressionist and by 1914 his work was already well known in artistic circles in Germany. This show of German Expressionists therefore fits in with the Van Gogh Museum's aim to present the successors of this famous artist.

Although the early work of the BrÃ¼cke artists exudes optimism, later they tended to concentrate on the darker side of the human psyche. Their work is characterised by bright, contrasting colours, solid contours and simple forms. Drawing played an important role: they attempted to capture the essence of the subject in quick, expressive sketches. The technique of woodcut was an ideal medium in which to render the rawness of life in all its rough and brutal reality. Moreover, these artists were not afraid of provocative subjects.

This exhibition, compiled by guest curators Jill Lloyd and Andreas Stolzenburg, features work by Ernst Ludwig Kirchner, Karl Schmidt-Rottluff, Erich Heckel, Otto Mueller, Emil Nolde, Otto Dix and Max Beckmann. The central theme of the presentation is the Expressionist image of the human form. Visitors are shown how the mood of German Expressionism changed over the years and how the idealistic, colourful works of the early BrÃ¼cke years in Dresden made way for the nervous, urban Expressionism of the art produced in Berlin. This was the eve of the First World War and the period of the 1918 revolution that marked the transformation from Empire to Republic.

Artists outside the BrÃ¼cke circle also responded in their own way to the tremendous changes in society and the new atmosphere of uncertainty, violence and modernity: for example, Emil Nolde sought refuge in nature, religion and exoticism; by contrast, Otto Dix depicted the horrors of war in the famous trench scenes he produced in 1924; Max Beckmann expressed his incisive criticism of society and human existence in the cynical images of his Die HÃ¶lle cycle of etchings made in 1918/19.

Interest in this new artistic movement soon grew in the modern harbour city of Hamburg, with its wealth of museums and collectors. Portraits of two of their most prominent supporters, the judge Gustav Schiefler and art historian Rosa Schapire, are featured in the show. The Hamburger Kunsthalle's remarkable collection of Expressionist prints and drawings did not survive the Nazi regime's Entartete Kunst (Degenerate Art) campaign intact, and many works of art were removed from the museum. Fortunately, the museum has been able to fill many of the gaps in this important collection in the post-war period.