The exhibition focuses on the work of Cornell, the American pioneer of collage, montage, and assemblage art, in the decades of the 1930s and the 1940s. It presents key works by Cornell as well as images by other artists such as Salvador Dali', Marcel Duchamp, Max Ernst, and Man Ray. 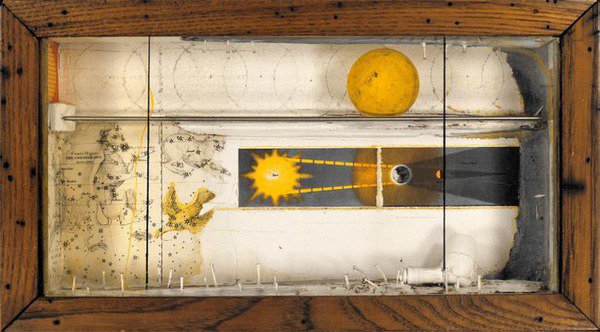 The exhibition Joseph Cornell and Surrealism in New York focuses on the work of Cornell, the American pioneer of collage, montage, and assemblage art, in the decades of the 1930s and the 1940s. These years span both Cornell’s emergence and maturation as an artist and the heyday of surrealism in the United States.
Surrealism launched Cornell as an exhibiting artist. It was also the cultural milieu that shaped and molded him through the first half of his career. The exhibition presents key works by Cornell as well as images by other major artists, such as Salvador Dalí, Marcel Duchamp, Max Ernst, and Man Ray, to evoke that surrealist environment in New York and to trace Cornell’s course through it. This will be the first exhibition focusing on Cornell to be hosted by a French museum since the touring exhibition from the Museum of Modern Art in New York visited the Musée d’Art Moderne in Paris in 1981.

While Cornell has been the subject of large monographic exhibitions in the USA, Joseph Cornell and Surrealism in New York is the first to place this great American master within the larger international context of Surrealism. More specifically, it centers on surrealism’s catalyzing effect on Cornell’s art. Surrealism activated the development of Cornell’s signature working method: collage and the related procedures of montage, construction, and assemblage. And it was to surrealism that Cornell owed his basic conception of the visual image as the product of poetic juxtaposition. With this in mind, the exhibition will explore the diversity and interconnectedness of Cornell’s artistic practices and formats. These include, of course, the two-and three-dimensional formats for which he is best known: collages, found object pieces, and shadow box constructions containing found objects. The other major strands of Cornell’s achievement will also receive in-depth examination: the artist’s engagement with photography, his ground-breaking work in collage film, and the open-ended and non-linear archives of printed materials that he called his «explorations.» Juxtapositions with key works by other artists—Marcel Duchamp, Salvador Dalí, Alberto Giacometti, Mina Loy, René Magritte, Lee Miller, Man Ray, Yves Tanguy, among others-will elucidate his activity in the context of surrealism.

The conjunction of Cornell with New York Surrealism sets up a number of key themes for the exhibition. One such theme is Cornell as urban archivist, who explores a specific milieu, the city and its outlying suburbs, and turns his discoveries into art. Another is the encounter between the home-grown and the foreign. Here the issue is not only Cornell’s association with members of the community of French exiles and expatriates living in New York, but also very importantly, if on a more abstract level, his attachment to (and use of) manifold aspects of European culture.

The most fundamental theme for the exhibition, however, is what aligned Cornell most profoundly with Surrealism: a great sensitivity expressed and explored on the level of artistic practice to the phenomenon of the “curiosity,” meaning objects (natural and fabricated, familiar and fantastic) which do not by normal convention belong to the realm of the fine arts, and an intense exploration of the devices, technologies, and instruments (frequently amazing or spectacular in their own right) that organize, preserve, and convey such things to the eye.

This international loan exhibition is organized by the Museum of Fine Arts of Lyon in collaboration with the Fralin Museum of Art, University of Virginia. It will be accompanied by a multi-authored exhibition catalogue containing new scholarship on Cornell. Symposia will be held in France at the Institut National d’Histoire de l’Art (INHA) on February 7 and 8 2014; and in the United States in the spring of 2014, as a collaboration between the Fralin Museum of Art and the Virginia Museum of Fine Arts in Richmond.

The cultural cooperation network FRAME (French Regional American Museum Exchange) supports the organization of the exhibition Joseph Cornell and Surrealism in New York at the Museum of Fine Arts of Lyon. The exhibition will be presented at the Fralin Museum of Art at the University of Virginia in Charlottesville, Virginia (USA), in spring 2014. The exhibition is organized with support from the Terra Foundation for American Art.

This exhibition is recognized as being of « Intérêt national » by the « Ministère de la Culture et de la Communication / Direction générale des patrimoines / Service des musées de France ».
As such it benefits exceptionally from financial support from the French State.