Theatre of the World

For its 10th showing of a private collection is invited David Walsh, founder of the Museum of Old and New Art (MONA) in Tasmania to show together apparently "heterogeneous" objects and question museal conventions. The exhibition shows non-Western works cabinet of curiosities pieces, antiquities, ancient art and works by contemporary artists. 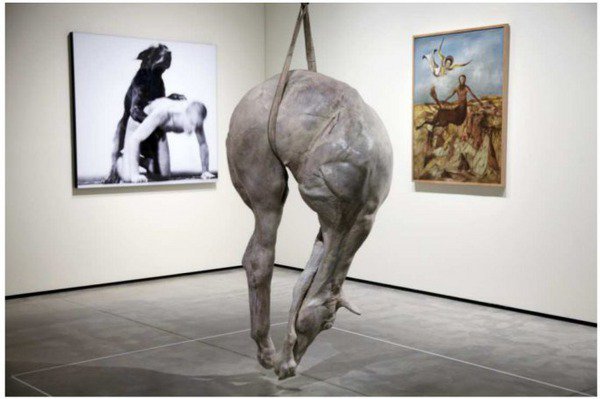 For its tenth showing of a private collection, la maison rouge invites David Walsh, founder of the Museum of Old and New Art (MONA) in Tasmania and the Tasmanian Museum and Art Gallery (TMAG). Curator Jean-Hubert Martin has delved into David Walsh's own collection, as well as that of the Tasmanian Museum and Art Gallery (TMAG), to show together apparently "heterogeneous" objects and question museal conventions.

Titled Theatre of the World in reference to Giulio Camillo's Theatre of Memory for François I, the exhibition sets out to suggest alternatives to the prevailing historical discourse. It transforms the viewer into an instrument for actively investigating and understanding the world.

The exhibition strikes relations, whether corresponding or contrasting, between the form or meaning of these works of different origins. Unexpected resemblances are brought to light through themes such as eyes, body, double or war. An entire gallery is given over to an outstanding collection of Polynesian and Melanesian tapa cloths from the Tasmanian Museum and Art Gallery collection.

David Walsh
David Walsh is an Australian art collector. In 1999 he opened the Moorilla Museum of Antiquities on a peninsula near Hobart in Tasmania. The museum closed for renovation in 2006, reopening in 2011 as the Museum of Old and New Art (MONA).
Australia's largest privately funded museum with 6,000 square metres of exhibition space, MONA extends over three subterranean levels, built into the cliff. It shows David Walsh's heteroclite collection, including Greek coins, archaeological artefacts, primitivism and contemporary art.
Works from different cultures, eras and origins come together in an anachronistic hanging. The collection forms a modern cabinet of curiosities that defies any habitual methodology.

Jean-Hubert Martin
An internationally respected curator and former director of the MNAM in Paris and of the Kunst Palace in Düsseldorf, Jean-Hubert Martin is the curator of Theatre of the World which shows part of the David Walsh collection.
An expert on European and American artistic circles and a connoisseur of contemporary art on all five continents, Jean-Hubert Martin has repeatedly demonstrated his role in spearheading new international art, and his interest for as yet little-known artists. He was, for example, an early proponent of the work of artists such as Boltanski, Buren, Delvoye, Messager, Sarkis and Schutte. Jean-Hubert Martin was one of the first curators to show art from around the world in Magiciens de la Terre in 1989. In doing so he sparked a passionate - and ongoing - debate on the meaning and value afforded to non-Western art. As the curator of the Lyons Biennale in 2000, he introduced anthropological elements which extended the term "exoticism" to the Western world: no longer the sole reference, the Western point of view is balanced by the vision which the rest of the world has of the West. For Hubert, globalisation is not synonymous with uniformisation but an acknowledgement of cultural diversity.
With Artempo at the Palazzo Fortuny in Venice, in 2007, Jean-Hubert Martin sidestepped technical constraints and chronological conventions to create associations and interplay between the works on view.

The Tasmanian Museum and Art Gallery (TMAG)
The Tasmanian Museum and Art Gallery is one of the most diverse and unusual museums in Australia, showcasing treasures of art, history and science. TMAG has its origins in Australia’s oldest scientific society, the Royal Society of Tasmania which was established in 1843.
Located on Hobart’s historic waterfront, close to the city’s centre, TMAG’s site includes the most significant collection of heritage buildings anywhere in Australia. Following a spectacular redevelopment in 2012, TMAG’s new permanent collection galleries provoke wonder, curiosity and inspiration. Exhibitions explore Tasmania’s rich and complex history, its proud Indigenous culture, rich artistic heritage, unique wilderness, unusual animals, and centuries of Antarctic and Pacific exploration.

Exhibition catalogue:
In French and English with colour illustrations, this is the tenth catalogue in the Privées collection, jointly published by la maison rouge and Fage Éditions.
With contributions from Jean-Hubert Martin, Thierry Dufrene, Tijs Visser and Kirsten Brett. p., 24 €