Mullican shows for the first time a set of objects from his collection (prehistoric stones, crystal lingams, comic books, 20th century industrial machines, Piranesi etching books (1720-1778)) against his own work. 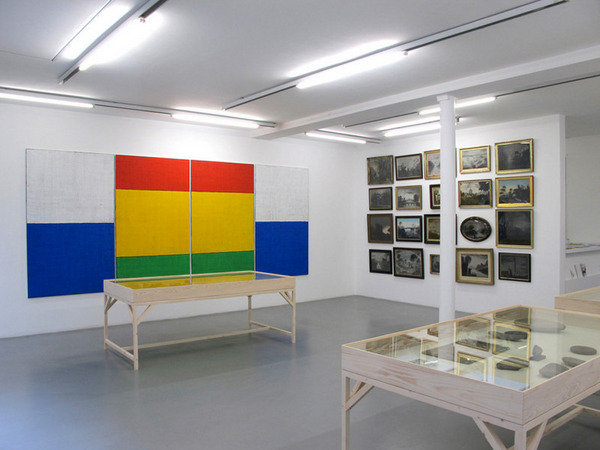 We are pleased to present Collecting for the studio – Collecting 1959-2013, the gallery’s fourth exhibition with the American artist Matt Mullican.

Since the 1970's, Matt Mullican has been interested in the models of representation and organization of the world. He has developed a complex symbolic language consisting of symbols based on both international signage and invented signs with an associated color system. These symbolic systems allow him to examine the relationship between reality and perception, to model the real and consider all stages of the human condition. Singular vocabulary unfolds through different media (drawing, painting, sculpture and video) which often coexist in dense installations.

The act of collecting and inventory is omnipresent in Mullican’s work. In the manner of the great encyclopedist Denis Diderot (1713-1784) he brings together and orders objects, images and symbols organized into categories, and creates new links and associations between them. From an early age, Mullican began collecting artifacts, first comic books, archaeological objects, and later tantric objects. Today this constitutes a large eclectic collection that inspires Mullican’s practice, as the chosen objects reflect his own research: "I'm a big collector of objects that mirrors the way I think or that follow the geometry of the way I look at things."*

For his new exhibition at the gallery, Matt Mullican shows for the first time a set of objects from his collection (prehistoric stones, crystal lingams, comic books, 20th century industrial machines, Piranesi etching books (1720-1778)) against his own work. This exhibition also presents the opportunity for Mullican to show paintings based on comic books, and recent works on paper, including a large installation of drawings made from An Illustrated History of Brain Function by Edwin Clarke and Kenneth Dewhurst (1975).

"[…] it is very difficult for me to qualify which comes first, the art or the collection. Does the collection influence the art or does the art influence the collection? They are a combination of things. I cannot say, the objects come first and the art comes second or vice versa. I think they merge into one to the point where you cannot tell where one ends and the other begins. Maybe that is why I collect so many different things."

Matt Mullican was born in Santa Monica, California, in 1951. He lives and works in New York and Berlin. His work has been widely exhibited in Europe and the United States. Recently, several retrospectives were devoted to him, at the Drawing Center in New York in 2008, at the Haus der Kunst in Munich and the Institut d’Art Contemporain in Villeurbanne in 2010. He is currently participating in the 55th Venice Biennale (The Encyclopedic Palace, Arsenal), and the Museo Tamayo in Mexico City will present an exhibition of his work from 23 October 2013. The artist's works can be found in major public collections: Musée National d’Art Moderne - Centre Pompidou, Paris; Fonds National d’Art Contemporain, Paris; Museo National Centro de Arte Reina Sofia, Madrid; Castello di Rivoli, Turin; Kunstmuseum Luzern, Lucerne, Museum of Modern Art, New York; The Whitney Museum of American Art, New York.