Les Arts Decoratifs is paying tribute to Jean Dubuffet (1901.1985) by celebrating the 40th anniversary of Coucou Bazar, the "moving picture" he created in 1970. The exhibition features the sets and costumes of the performance created in 1973, and audio archive material. 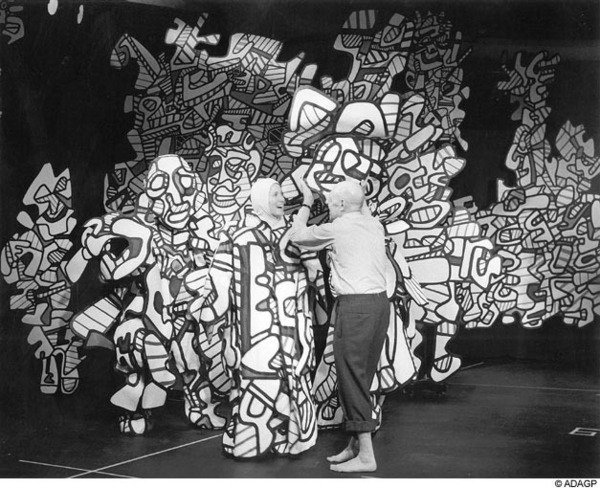 Les Arts Décoratifs is paying tribute to Jean Dubuffet (1901–1985) by celebrating the 40th anniversary of Coucou Bazar, the “moving picture” he created in 1970. The culminating work of the Hourloupe series, whose painterly vocabulary consists of hatched red, white and blue compartments on a black ground, either on paper, canvas or on architecture, Coucou Bazar is one of Jean Dubuffet’s most original creations. An ensemble of painted cut-outs, mobiles and costumes worn by dancers, all of which move quasi-imperceptibly, it creates an infinite succession of combinations whose different planes move, disappear or appear as if every part of the picture had a life of its own.

The exhibition recreates Coucou Bazar in the Nave at Les Arts Décoratifs. Some of the characters will be played by costumed dancers, with audio and visual archive material from the original performance enhancing this reconstruction. This exhibition again recalls Les Arts Décoratifs’ close bond with Dubuffet’s oeuvre, consecrated by the artist’s exceptional donation of 158 works in 1967, on permanent display in the Dubuffet Room.