Atlas - Mikromega. The exhibition focuses on the visions of space the artist articulates in the plates of his ATLAS, divided into sections clustered around richly varied motifs, some of which have served as sources for paintings and other works. 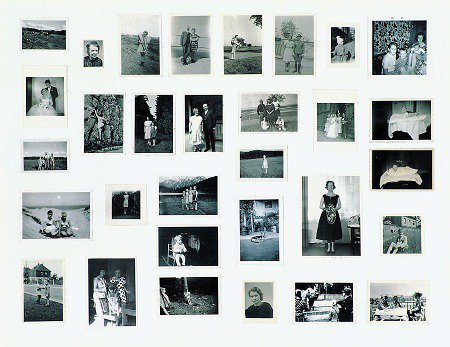 In the early 1960s, Gerhard Richter starts collecting for his ATLAS thousands of photographs, newspaper clippings, sketches, and collages, which he groups based on formal criteria as well as content. He then consolidates several—sometimes dozens—of the resulting plates into blocks of imagery. Some motifs have served as sources for paintings and other works, but many remain unrealized ideas. Other plates show how Richter, in sketches and collages created as early as 1971, frames visions of spaces that grow virtually beyond measure. These drafts illustrate that the artist’s interest extends beyond the individual painting to visionary three-dimensional designs and the placement of pictures in space.

The ATLAS is divided into sections clustered around richly varied motifs. Since the 1970‘s they have been on display on various occasions; Richter personally arranged them in mural-like formats adapted to the given architectonic situation.

The title MICROMEGA (Greek for smalllarge) is meant to express this salient aspect of the ATLAS as a work of art. It refers to Voltaire’s “Micromégas: A Philosophical History,” a short story published in 1752 that speculates about the relative dimensions of reality.

The exhibition focuses on the visions of space Gerhard Richter articulates in the plates of his ATLAS. Some of these, including groups of works on the “1972 Olympics,” the “Reichstag” (1997), the “Cathedral Windows” (2006), and the “Strip” series (2012), have never been on public display. They exemplify the artistic strategies Richter employs to work his way up to sometimes enormous dimensions. A no less crucial technique is the transfer of his designs into other media that elude the painter’s immediate grasp: see the Jacquard tapestries and collages of colored stripes as well as a sculpture composed of ten panes of glass. Several models, also on display for the first time, visualize Richter’s plans for additional glass pane sculptures. The reflective glass transfigures the reality “behind” it and builds distance. Even some of the earliest plates (e.g., no. 27) contain these tilted glass panes. Further models suggest the artist’s visions for exhibition spaces.

The Lenbachhaus was able to acquire the ATLAS in 1996, when it included 583 plates. It has steadily grown over the intervening years and now encompasses 783 plates. With the latest addition of 19 plates, Richter completes the ATLAS