The ghosts of existing artworks and the premonitions of new artworks come together in a phantasmagoric play of sound and image, motion and stillness, light and darkness. 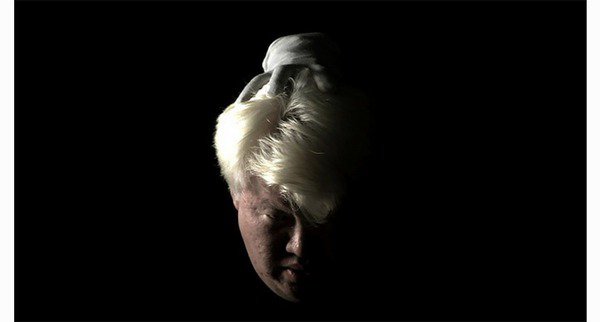 Pythagoras of Samos (c. 570 BC – c. 495 BC) was an Ionian Greek philosopher, mathematician, and founder of the religious movement called Pythagoreanism, in which probationary pupils were required to sit in absolute silence while listening to their master’s voice from behind a veil.

PYTHAGORAS is an exhibition built around the notions of veils and ventriloquism. Here, the ghosts of existing artworks and the premonitions of new artworks come together in a phantasmagoric play of sound and image, motion and stillness, light and darkness.

In the room, we find MILTON (2013), the blind and furious seer, called forth from the ruins of EARTH (2009), as NEWTON (2009) struggles to recast the universe according to his unbending laws of cause and effect, action and reaction. Meanwhile, alone and lost in the darkness, GOULD (2013) is touched by the disembodied hand of inspiration as PYTHAGORAS (2013) hides behind his veil, a voice without a body, as he directs this raggedy troupe of wraiths.

Ho Tzu Nyen works primarily in film, video, and performance, developing recent works into environmental multimedia installations. His practice involves appropriating the structures of epic myths to invoke their grandeur as well as to reveal these narratives as fiction- and reality-machines. Recent one-person exhibitions of his work include MAM Project #16 at the Mori Art Museum (2012), the Singapore Pavilion at the 54th Venice Biennale (2011) and Earth at Artspace, Sydney (2011). His films have been presented at festivals such as 41st Director’s Fortnight, Cannes International Film Festival (France, 2009), 66th Venice International Film Festival (Italy, 2009), and Sundance Film Festival (USA, 2012).