Bracket (Paris). In a group of four photograms that engage the entire space, the artist draws the relationship between exhibition modes of display, architecture and photography's own history and processes. 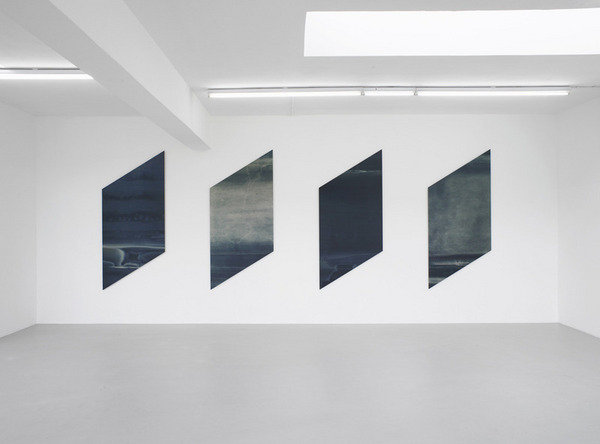 The third instalment of A Moveable Feast is dedicated to photographer Liz Deschenes. This presentation operates within the framework of the artist‘s parallel exhibitions Bracket (London) and Bracket (Paris).

In a group of four photograms that engage the entire space, Deschenes draws the relationship between exhibition modes of display, architecture and photography’s own history and processes. Taking into account the proportions, axis and aesthetics of the exhibition space, Deschenes reconfigures the Stereographs earlier shown at Secession Vienna for 6 Rue de Braque.

This body of work refers to stereography, a historical image production technique in which two pictures of the same motif, taken from slightly different angles, create photographs with a three-dimensional effect. Yet Deschenes‘ “stereo graphic” way of working, as Johanna Burton states in her essay for the Secession catalogue, does not relate to an image but rather to an experience. That is, the experience of witnessing a work that continues to develop, either as a result of their chemical composition (the works oxidise and change within time), their mirror like surface, which allows them to reflect the space around them as well as their viewers, or their positioning in the room, which generates a narrative across the space.

Informed by early experimental processes around the production of unique images, the works in Bracket (London) and Bracket (Paris) explore the hidden similarities between photography pioneers Louis-Jacques-Mandé Daguerre and William Henry Fox Talbot. The narrow, elongated photograms presented in Paris are joined together at an angle, forming a kind of fold that alludes to the bellows of a large-format camera. Deschenes has also alluded to the visual connection between the works, the space, and the camera (which also means room in latin) in the photograms made for Whitney Biennial in 2012. As in Bracket (London), the photograms presented in Paris work as a framing device, a structural element of the space that engages the viewer while showing photography’s inherent contingency.

Liz Deschenes lives and works in New York. Deschenes’ work will be the subject of a solo exhibition at the Walker Art Center in October 2014. Recent exhibitions include a solo exhibition at Secession, Vienna; the Whitney Biennial 2012 and Parcours at the Art Institute of Chicago with Florian Pumhösl. Her work is part of the permanent collections of Centre Pompidou, Paris; MoMA, New York; Whitney Museum of American Art,
New York; The Metropolitan Museum of Art, New York; The Walker Art Center, Minneapolis; The Art Institute of Chicago; Hirshhorn Museum and Sculpture Garden, Washington D.C; Corcoran Museum of Art, Washington D.C. and CCS Bard Hessel Museum, Annandale-on Hudson. Deschenes teaches at Bennington College, Vermont and is a Visiting Artist at Columbia University, New York.