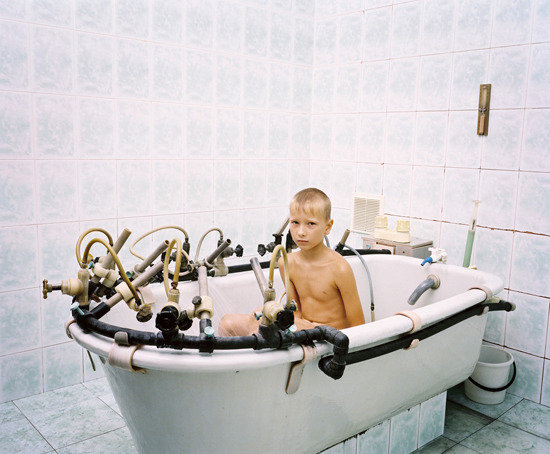 Germaine Van Parys (1896-1983) was a pioneer in Belgian photo journalism. Together with her godchild Odette Dereze (DOB 1932), Van Parys accomplished an impressive oeuvre. Their work offers a unique insight into the history of Belgium from 1918 until the end of the last century.
Van Parys made a substantial contribution to the development of professional photography in Belgium. Her field of interest was broad, seeing that she recorded historical milestones as well as everyday scenes. Moreover, she managed to build a relationship of trust with the Belgian royal family, which culminated in legendary portraits.
The work of Odette Dereze, too, reflects a broad interest in politics, culture, business and events. Her photography betrays a skilled eye, one that is trained on the human being.
The exhibited photographs tell a powerful, visual story in which universal themes, such as sorrow, joy and dreams are woven into the journalistic assignments. We see Belgium through the lens of two master photographers.

By way of exception, the archives of these photographers were open to the general public thanks to the support of the Germaine Van Parys Foundation and the efforts by Prof. Johan Swinnen who is also fellow-curator of this exhibition.

The Sochi Project: An Atlas of War and Tourism in the Caucasus Rob Hornstra en Arnold Van Bruggen

The Winter Olympics in 2014 will be held in the South Russian Sochi. It will be the most expensive Games ever, in a subtropical resort and near the very brutal North Caucasus. Since 2009, photographer Rob Hornstra and author Arnold van Bruggen have worked without interruption on a comprehensive documentary about this controversial conflict area.

The Sochi Project wishes to inform as many people as possible of the people, the country and the turbulent history of this small, but complex region. Topics including corruption, violence, terrorism and tourism are the common themes throughout the project. At regular intervals, finished stories have been released in the form of publications and presentations. This exhibition is the sum total of five years of in-depth, slow-journalism research.

Right from the start in 2009, the funding of The Sochi Project relied on donations from private donors. While Crowdfunding was then unique in Europe, it has since been much imitated.
The Sochi Project does not only receive international attention on account of the unique funding model, it is also amassing numerous international awards. Accordingly, the first annual publication ‘Sanatorium’ received the New York Photo Book Award in early 2010. This was followed by the Dutch Canon Prize, the World Press Photo Award, the Sony World Photography Award and the Magnum Expression Award.
The closing publication ‘The Sochi Project: An Atlas of War and Tourism in the Caucasus’, published by Aperture, will be presented during the first major retrospective of The Sochi Project at FoMu in the autumn of 2013.
The exhibition runs until the Winter Olympics in February 2014 and will also stop at the Winzavod Museum for Contemporary Art in Moscow and the DePaul Art Museum in Chicago. www.thesochiproject.org

The news that ends up in the newspapers at our breakfast tables has been subjected to endless filters. Just as well. Every day, thousands of photographs are posted to editorial offices, while only a few make it to the finish. With the exhibition Nieuws?, FoMu questions these selection rounds. Who decides what is newsworthy? Why is one image chosen over another? What image do we get of the world? Through whose lenses are we looking anyway?

Press photography forms an inherent part of our society. Images tell and illustrate stories in newspapers and magazines. Joseph Quatannens (1902-1974) was a Belgian freelance photographer who had covered the news since the 1920s on behalf of both domestic and foreign magazines. With the establishment of his press agency Le Lynx, he contributed to the professionalisation of the fledgling photo press sector. The photo archives Le Lynx (1927-1950), which comprises over 12,000 negatives, was opened by FoMu last year and studied. The collection presentation Le Lynx sheds light not only on the career of a long-forgotten Belgian press photographer, but also on the effect and significance of the illustrated press in Belgium.
The archives also served as case study for the restoration and conservation project on negatives on glass and film: Breekbaar bezit.

The 'Great War' was the first large-scale conflict that was recorded on celluloid and film. The fledgling media appeared to have unprecedented powers as the all-seeing eye, a reminder, but also as a weapon. Images not only chronicle a conflict, they also play a crucial role in it. Shooting Range highlights the way in which this happened in a conflict that kept the world in its grip for four years. FoMu shows how still image was used in newspapers, magazines, postcards or for military purposes. Propaganda and anti-war films also serve to widen the concept of this world conflict. FoMu does not only show historical documents in their original form, but also views century-old images with contemporary eyes.