Alongside a host of her celebrated photocollages from the 1980s and a four-channel video work of 2004, Kruger is for the most part presenting new installations that have been especially conceived. Garcia's conceptual works comprise photographs, films, performances, and installations frequently involving actors as well as members of the audience. 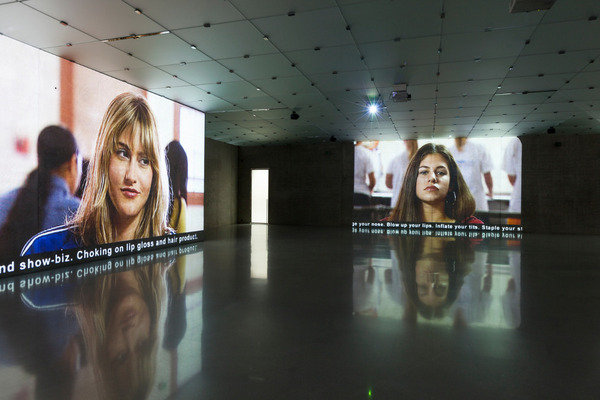 The solo exhibition by Barbara Kruger especially designed by the artist for the Kunsthaus gives visitors a chance to explore the wide range of her artistic practice in different media. Alongside a host of her celebrated photocollages from the 1980s and a four-channel video work of 2004, she is for the most part presenting new installations in Bregenz that have been especially conceived for the unique Kunsthaus architecture.

What makes her videos, installations, collages, posters, and photographs compelling, among other things, is how she consciously reflects the art system—its hierarchies and strategies as well as its presentational and distributional relations. Again and again, Barbara Kruger breaks out of this system’s closed circuit by conceiving projects for magazines, poster walls, or other media and sites in public space.

Throughout her career, Barbara Kruger has reflected on or augmented the formal, thematic, and visual messages of these specific communication strategies, often unmasking their problematic ambiguity in the process. Just as the distribution and presentation sites she has used (e.g. magazines, posters) are characterized by a certain transience and intensified circulation, so too Kruger often insists on the ephemeral physical status of her works, since her wall and large-scale spatial installations are usually destroyed at the end of an exhibition. That they can be installed again in the same or in a different form on another occasion is just one of the ways in which the artist comments, with relish and wit, on the complex commodity character of art.

Ultimately Barbara Kruger’s works are characterized by a high level of social commitment, advocating women’s rights, freedom of opinion, a critical awareness of the seductions of consumer culture, and of how power, or the lack of it, determines the feel of our days and nights. These—in the best sense of the word—striking works are captivating for their immediacy, their directness of address, involving the viewer by means of questions or clear-cut statements. Depending on their message, her text-image designs provoke the viewer to contradict, endorse, laugh, or ponder. No one is left cold.

Barbara Kruger has selected text works for the six kub Billboards along Seestraße between the train station and Kunsthaus Bregenz. Her iconic text-images directly address passersby with short poetic-philosophical statements and inquiries, occasionally also utilizing the German language, so as to more closely engage the local public.

Barbara Kruger’s pictures and words engage issues of power, pleasure, money, love, and death. Her photographs, large scale textual installations, and immersive multi-channel video work address the viewer through a kind of intensely spatialized visual display.
The œuvre, which has been continuously developed over several decades, will be examined from differing perspectives in an in-depth conversation between the artist, Beatriz Colomina (architectural theorist and historian), and Mark Wigley (architect and architectural theorist). The concept of the exhibition at Kunsthaus Bregenz, and the new work which has been especially produced for it, will be examined in Yilmaz Dziewior’s introductory essay.

The catalog’s comprehensive documentation of the installation in generous photographic spreads, designed in close cooperation with the artist, demonstrates the enormous currency of the statements as well as the powerful forms of address within Barbara Kruger’s work.

The Spanish artist Dora García’s conceptual works comprise photographs, films, performances, and installations frequently involving actors from performance and theater as well as members of the audience. She designs stories, scenarios, and situations which permit her to experiment, interfere with, and invert expectations. The results are performative, site-specific ensembles opening up the exhibition space.

Dora García has taken part in numerous important exhibitions, such as the 54th Venice Biennale 2011, where she curated the Spanish Pavilion as well as dOCUMENTA (13) in Kassel in 2012. Her recent project The Joycean Society (2013) is a film project in which she accompanied a James Joyce reading group based in Zurich for a year, whilst they developed ways of interpreting and translating Finnegans Wake.

An interest in language is crucial to all of García’s work: for creating communities, as an access code to secret societies, as a space for action, as well as the structure of the unconscious. For The Sinthome Score, developed especially for kub Arena, García raises questions of representation and translation whilst incorporating the collaboration of the local population.

For the exhibition, kub Arena will be opening an additional entrance bearing the inscription »Sinthome.« The term originates from a text by the French psychoanalyst Jacques Lacan, Seminar XXIII — Le Sinthome (1975—1976). An involvement with James Joyce’s work caused Lacan to reconsider his model of the Borromean rings, expanding it to include the Sinthome, the core of the subject binding the three rings. The converted backdoor of kub offers an alternative way of entering the institution, to approach this area made spatial, from the rear whilst simultaneously encountering objects and people.
Using the German translation by Max Kleiner (2007), Dora García has constructed a score for performers from the region. The ground floor of the Kunsthaus will provide a stage for numerous interpretations of García’s score, an exploration of the unconscious in which the public can participate.