Per Speculum Me Video

The exhibition brings together works by 9 artists who explore the construction of the self in contemporary video art and photography. The Latin title underscores the theory of French psychoanalyst Jacques Lacan- that self-perception and the development of the ego are coupled with the recognition of one's own image in the mirror. A contribution to the new "B3 Biennial of the Moving Image". 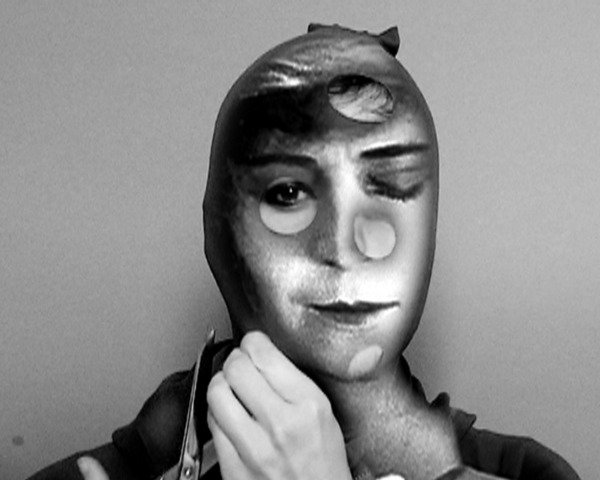 The Frankfurter Kunstverein is presenting the group exhibition “Per Speculum Me Video” as its contribution to the new “B3 Biennial of the Moving Image” in Frankfurt/Rhein-Main. It brings together works by nine artists who explore the construction of the self in contemporary video art and photography. Sounding like a long forgotten magical spell, the Latin title of the exhibition underscores the theory of French psychoanalyst Jacques Lacan—that self-perception and the development of the ego are coupled with the recognition of one’s own image in the mirror.

Today digital portraits and self-portraits are omnipresent—on mobile phones, through Skype conversations. We and others produce and send them incidentally, and they reappear unexpectedly in social networks. But what is the significance of one’s own image, when it is continually being replicated and is constantly available? What status does such an image have, and how can someone identify the portrayed, when every image and every self-portrait is always available, on the one hand, and when such images have the inherent potential of be technically altered and challenged in terms of authenticity, on the other?

This has become an acute question in contemporary video art. Self-portraits and closed-circuit installations have always played a central role throughout the 50-year history of the medium, as a reflection on the standpoint of the viewer or as an epistemic question of identity. However, given the daily production and dissemination of moving self-portraits and the temporarily or experimentally assumed roles as the norm in social networks, new questions have emerged for many video artists surrounding the visual constitution of a subject or its counterpart as well as the perception of the self in a moving image.

The artist Martin Brand addresses the theme of the search for identity in his video installation “MySpace” (2008). In a double projection he shows a series of different teenagers, who through a special composition of the image each appear in double, posed next to themselves in their bedrooms as twins. Their varying clothing and poses reflect varying levels of self-confidence in relation to the way the young protagonists choose to portray themselves.

In their work “Toxic” (2012) the artist duo Pauline Boudry & Renate Lorenz explore how identities are imposed on people. The multiple-part installation consists of a video film, stage set, and photographs; it shows a punk figure and a drag queen—two protagonists whose gender and origins cannot be clearly defined—on a stage decorated with a range of kitschy props. Through these two exaggerated, fictional characters, which are contradicted by the authentic voices of the actors and the way that they sporadically step in and out of their roles, the work “Toxic” posits the imposition of an identity against a gaze and way of looking that is false and “poisoned” from the very start.

The video “o.T” (Untitled) (2011) by Gilda Weller centers on notions of identity and self-perception. In the work three young women overtly and passionately express their thoughts on “happiness,” “security,” and “being a woman,” whereby the situation and motivation behind the film remains open-ended. Is the video camera engaged in a kind of therapeutic mirroring? The ingenious editing of the image and sound as well as the alternation between portrait shots and close-up macro shots raise questions for the viewer, whether and if a real person is actually emerging from behind the image. Perceptions of the self and others are also at the core of works by Eva Weingärtner, who takes on various roles and creates an alter ego for herself as an actress in her own video films and performances. In “2me” (2010) a young woman kisses and caresses her mirror image, taking her actions beyond extreme narcissism to the point of self- aggression. Like Weingärtner, Benny Nemerofsky Ramsay also appears in his works. He uses the medium of the video self-portrait as a way of addressing existential questions, such as a longing for authenticity, and uses the emotive expressiveness of songs and texts from pop music in the process. His sound installation “The Burden” (2010) confronts viewers with an endless amount of mirror images of themselves as well as a set of headphones, which plays a seven-minute sound track of someone singing the English personal pronoun “I” in highly varied intonations to the sound of a penetrating techno beat.

Barbara Probst’s series of photographs explore the relationship between the moment of the photograph and reality. The artist breaks down the individual motif into a multiple of standpoints and multiplies the brief instant in which the photograph is taken. Different cameras pointing to the same motif are simultaneously activated by a radio signal. The photographs taken in this manner comprise a series of images, which are all constituted by the same moment—the release of the shutter at a certain instant at a certain place. The individual image thus no longer exists. At the same time a feedback occurs between the photographed person, the photographer, and the viewer of the photographs, because what those who are photographing see is often depicted in another image in the series—and they themselves also appear in the photograph. An exciting game unfolds between the gazes directed at the self and one’s counterpart, giving rise to the fundamental question of the construction of the subject.

B3 FESTIVAL CENTER: From October 30 to November 3, 2013 the Frankfurter Kunstverein will host the B3 Biennale as the festival center. During this time the exhibition will be only limitedly on view. Different opening hours and entry fees apply. For information, please see www.b3biennale.de