In "Reference Points" Nicolas Lamas plays with the codes and material and confronts opposed objects. Alek O. introduces her "On Parasols, Jumpers and Balls", a work grounded on the reinterpretation of seemingly trivial objects. Lieven De Boek presents his masterly sculptural work "Mikado LDB Modulor" in the wunderkammer. 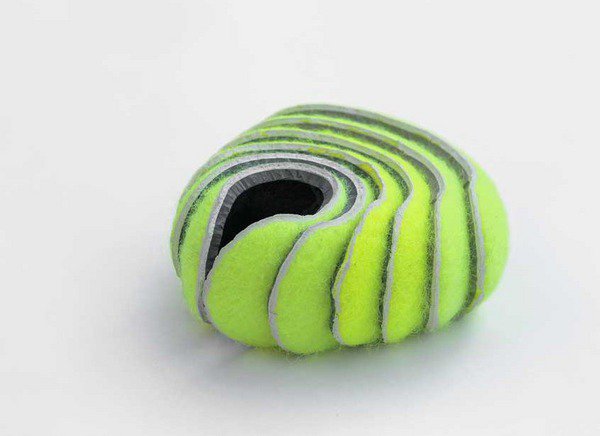 “Reference Points” is the first solo exhibition in Europe by Nicolas Lamas (b.1980, Lima, Peru). The young artist occupies the first floor of the gallery. The practice of the young Peruvian artist based in Belgium is fed to a reflection on space, time, culture and science. Exploring in an almost scientific way, different fields such as astronomy or physics are questioned. Lamas formalizes his research in using various media as photography, sculpture, video or readymade objects. This exploration sometimes push to absurd undermines measurement systems that govern our daily lives. The artist plays with the codes and material and confronts opposed objects to bring out meaning and drama.

Alek O. (b.1980, Buenos Aires, Argentina) introduces her “On Parasols, Jumpers and Balls” as work grounded on the reinterpretation of seemingly trivial objects. It is the personal significance and the nostalgic aspect of these objects that contribute to the story told by the artist. Gloves, umbrella’s or shirts are deconstructed and abstracted to the essence, making it possible to create a new meaning with the fibre that is left. By unraveling a pair of gloves she creates potential to tell a new story. This appropriation of the material results in an entirely new layer to the work, often making references to historical events. She uses the ready made, but the deconstruction and the orderly way of rearranging the material transforms it to an abstract rectangular shape. With techniques such as embroidery, Alek O. reshapes these objects into a canvas. The result appears to be an abstract painting, with references to colour-field painting.

Lieven De Boek (b.1971 Dendermonde, Belgium) presents his masterly sculptural work “Mikado LDB Modulor” in the wunderkammer. This technical tour de force consists of glass elements referring to the game of Mikado, with measures and colours related to the length of the artist himself as well as to the Anglo-Saxon metric system.