Black Continents. The exhibition brings together works executed between 2010 and 2012, like the fishnet writing, sculptural objects and drawings. Her world, imbued with humour and showing a fascination for Art Brut, celebrates woman in the most commonplace aspects of her everyday life. 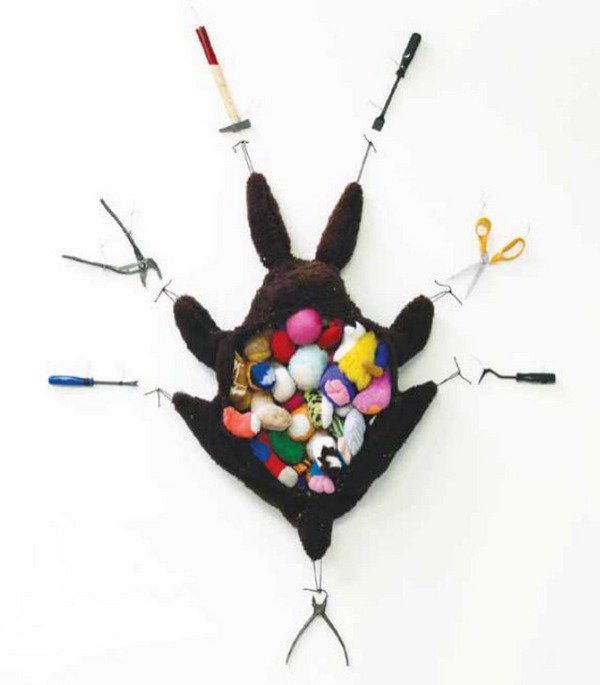 The MAMCS is presenting the first exhibition devoted to this artist in a French museum since the important retrospective held in 2007 at the Centre Pompidou.

Under the title Black Continents, the exhibition brings together works executed between 2010 and 2012, most of which are here being shown in public for the first time. Annette Messager, a major artist of the international contemporary scene born in 1943, represented France at the Venice Biennale in 2005, where she was awarded the Golden Lion.

The unusual works Annette Messager has been producing since the beginning of the 1970s resemble collections of objects, homespun handiwork or children’s games and combine such contrasting features as photographs, drawings, embroidery, manufactured objects or stuffed animals. Her world, imbued with humour and showing a fascination for Art Brut, celebrates woman in the most commonplace aspects of her everyday life while, at the same time, like an ethnologist, she hunts down our world through its ultimate vestiges.

In her most recent works, Annette Messager has confronted us with a world of cataclysmic blackness, urban remains of an ultimate burn-out. Petrified or carbonized, its miniaturised floating detritus agglutinated into sorts of flying islands seems to stifle what life is left on planet earth. Remotely inspired by the world of Swift’s Gulliver’s Travels, Annette Messager explores here the expressive registers of fantasy and science fiction, portraying the ills of the contemporary world in a kind of philosophical tale or political fable. The earnestness of her intention is enlivened by her fondness for derision and playfulness, and anguish is kept at bay by the evocations of the world of childhood.

The exhibition layout, developed in close collaboration with the artist, presents twenty works, three of them in large-scale format while others are smaller,­ like the fishnet writing, sculptural objects and drawings.

The exhibition is being accompanied by an Artist’s Book. Annette Messager has asked the American writer Norman Spinrad to write about her recent work. In his novels and short stories, Spinrad, a science-fiction writer, depicts fantasy worlds that have lost their bearings. (Annette Messager. Continents noirs, Paris, Xavier Barral, 2012)