Body and Machine in Early 20th-Century Art, presenting more than 70 artworks that explore a central dynamic of art making in Europe and the Americas between the 1910s and the early 1950s. The exhibition includes a rich group of paintings, sculptures, photographs, drawings, prints, and illustrated books from the collection of SFMOMA. 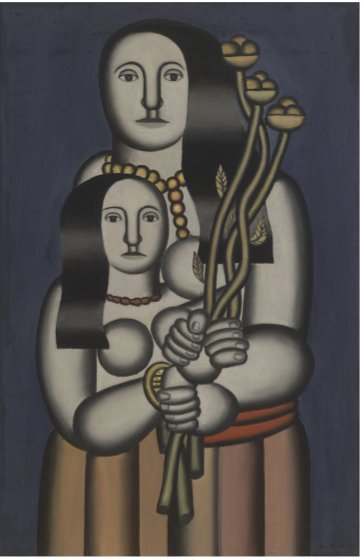 Co-organized by the Cantor Arts Center at Stanford University and the San Francisco Museum of Modern Art (SFMOMA), Flesh and Metal: Body and Machine in Early 20th-Century Art presents more than 70 artworks that explore a central dynamic of art making in Europe and the Americas between the 1910s and the early 1950s. On view from November 13, 2013 to March 16, 2014 at the Cantor Arts Center, the exhibition includes a rich group of paintings, sculptures, photographs, drawings, prints, and illustrated books from the collection of SFMOMA. Taken together, the works offer a fresh view of how artists negotiated the terrain between the mechanical and the bodily—two oppositional yet inextricably bound forces—to produce a wide range of imagery responding to the complexity of modern experience.
Featured artists include Margaret Bourke-White, Constantin Brancusi, Giorgio de Chirico, Salvador Dalí, Marcel Duchamp, Germaine Krull, Fernand Léger, Wyndham Lewis, László Moholy-Nagy, Piet Mondrian, Man Ray, Alexander Rodchenko, and Charles Sheeler, among others.

The exhibition is part of the collaborative museum shows and extensive off-site programming presented by SFMOMA while its building is temporarily closed for expansion construction. From the summer of 2013 to early 2016, SFMOMA is on the go, presenting a dynamic slate of jointly organized and traveling exhibitions, public art displays and site-specific installations, and newly created education programs throughout the Bay Area.

Flesh and Metal is curated by Hilarie Faberman, Robert M. and Ruth L. Halperin Curator of Modern and Contemporary Art at the Cantor; Nancy J. Troy, Victoria and Roger Sant Professor in Art at Stanford; and from SFMOMA, Janet Bishop, curator of painting and sculpture; Caitlin Haskell, assistant curator of painting and sculpture; and Corey Keller, curator of photography. During winter and spring 2013, Troy and Faberman taught exhibition-related courses at Stanford wherein students assisted with curating, designing, and interpreting the exhibition.

"We are thrilled to pair SFMOMA's world-class collection with Stanford’s renowned academic resources,” said Connie Wolf, the John and Jill Freidenrich Director of the Cantor Arts Center. “Cantor curators and the distinguished chair of the Department of Art and Art History guided seminars specifically for this exhibition, with students examining art of the period, investigating themes, studying design and display issues, and developing writing skills. The students gained immeasurably by this amazing experience and added new research and fresh perspectives to the artwork and to the exhibition. We are proud of the results and delighted to present a unique and invaluable partnership that will enrich the Stanford community, our museum members, and our visitors.”

SFMOMA’s Curator of Photography Corey Keller concurred: “The opportunity to work with our colleagues at Stanford has been a remarkable experience both in the galleries and in the classroom. We couldn’t be prouder of the exhibition’s unique perspective on a particularly rich area of SFMOMA’s collection that resulted from our collaboration.”

Exhibition Overview
The exhibition is organized into four thematic sections dealing with the human figure, the imagination, the urban landscape, and the object, which together reveal a range of artists’ responses to the conditions of modernity. At the beginning of the 20th century, many hailed the machine as a symbol of progress. “Speed” and “efficiency” entered the vocabularies of art movements such as Futurism (in Italy), Purism (in France), Vorticism (in England), and Constructivism (in Russia), all of which adapted the subject matter and formal characteristics of the machine. Factories and laborers were presented positively as emblems of modernity, and mechanization became synonymous with mobility and the possibility of social improvement. Countering this utopian position were proponents of the Dada and Surrealist movements (based largely in Germany and France), who found mechanical production problematic. For many of these artists who had lived through the chaos and destruction of World War I, the machine was perceived as a threat not only to the body, but to the uniquely human qualities of the mind as well. These artists embraced chance, accident, dream, and desire as new paths to freedom and creativity, in contrast to their counterparts who maintained their faith in an industrially enhanced future.

Though art from the first half of the 20th century is often viewed as representing an opposition between the rational, impersonal world of the machine and the uncontrollable, often troubling realm of the human psyche, the work in this exhibition suggests a more nuanced tension. In fact, artists regularly perceived these polarities in tandem. The codes of the bodily and the industrial coalesce in Fernand Léger’s machine aesthetic, on view in his 1927 painting Two Women on a Blue Backgound and an untitled collage from 1925. For his “rayographs,” Man Ray made use of mass-produced objects, but deployed them in a lyrical and imaginative manner—placing them on photosensitized paper and exposing it to light. Constantin Brancusi’s The Blond Negress (1927) and Jacques Lipchitz’s Draped Woman (1919) update the tradition of the cast bronze figure by introducing impersonal geometries. And even the seemingly formulaic surfaces of Piet Mondrian’s abstract paintings eventually reveal the artist’s sensitive hand.

The exhibition will be presented on the second floor of the Cantor Arts Center in the Ruth Levison Halperin Gallery and the Marie Stauffer Sigall Gallery; related films will also be screened as part of the exhibition.

Flesh and Metal: Body and Machine in Early 20th-Century Art is jointly organized by the Cantor Arts Center at Stanford University and the San Francisco Museum of Modern Art. Both institutions gratefully acknowledge major support from Doris Fisher and the Cantor Arts Center’s Clumeck Fund and Susan and John Diekman Discretionary Fund; generous support from the Cantor’s Contemporary Collectors Circle; and a sponsorship gift from Gay-Lynn and Robert Blanding. Additional support is provided by Phyllis Moldaw and Bobbie and Mike Wilsey, with a participatory gift from William Reller.

About the Cantor Arts Center at Stanford University
The Cantor Arts Center, Stanford University’s only museum, is a vital and dynamic institution with a venerable history. Founded in 1891 with the university, the historic museum was expanded and renamed in 1999 for lead donors Iris and B. Gerald Cantor. The museum’s encyclopedic collection spans 5,000 years, includes 32,000 artworks, and beckons visitors to travel around the world and through time: from Africa to the Americas to Asia, from classical to contemporary. With 24 galleries presenting selections from the collection and more than 20 special exhibitions each year, the Cantor serves Stanford’s academic community, draws art lovers from the San Francisco Bay Area and beyond, and attracts campus visitors from around the world. Free admission, free tours, lectures, family activities, plus changing exhibitions make the Cantor one of the most well-attended university art museums in the country and a great resource for teaching and research on campus.

About the San Francisco Museum of Modern Art
Founded as the first West Coast museum devoted to modern and contemporary art, SFMOMA is currently undergoing a major expansion project that will significantly enhance gallery, education, and public spaces, enabling the museum to better showcase its expanded permanent collection and serve its growing audiences. During the construction of its new building from the summer of 2013 to early 2016, the museum will go beyond its walls and directly into the community with an extensive array of off-site programming, including collaborative and traveling exhibitions, site-specific and commissioned projects, and new education initiatives throughout the city and region.

In addition to the Cantor Arts Center, future museum partners with SFMOMA include the Yerba Buena Center for the Arts (spring 2014); Asian Art Museum (summer 2014); Oakland Museum of California (fall 2014); Museum of the African Diaspora (winter 2015); and Berkeley Art Museum (spring 2015). On view concurrently in Silicon Valley with Flesh and Metal will be Project Los Altos: SFMOMA in Silicon Valley, an exhibition sited throughout the downtown commercial core of Los Altos, featuring new commissions by seven national and international artists (on view November 9, 2013 to March 2, 2014).