Artecitya aims to consider some reflexions and approaches to the city that the architects and the artists engaged through their work during the last sixty years. Fifteen projects have been chosen to attest of an environment in constant reconfiguration. 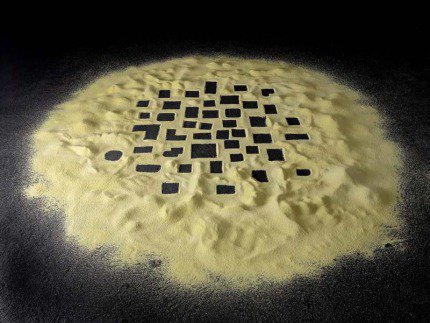 Inaugurated in 1983, the Regional Contemporary Art Fund (FRAC) of the Centre Region built over time an outstanding collection based on the "Art and Architecture" guideline. Its acquisitions constitute an inventory of the experimental architecture from the 1950s to the present day and offer a transversal questioning of art and architecture entering fully into the issue of the e.city – Europe.

The link between art and city is determined by the fact that creation evolves according to times, social, economic, political and, consequently, urban contexts and reflects them. At the end of the Second World War, the development of urbanization leading to the development of social interaction and increased mobility for everyone (through the development of road networks, telecommunications etc.) undeniably change the function of the artworks. Their format reflects in return increasing urbanization of the artistic experience, as in the works of Ugo La Pietra, Architecture principle or Peter Cook. The latter one created in 1968 the Instant-city, a nomadic city consuming the information seeping through existing communities as a complementary element to the city. Ephemeral, it creates an event and then disappears, highlighting the notion of network (informational, educational, etc.). Architecture is no longer a building but an instant action. Twenty-five years later, when some artists continue to denounce the excesses of the society, it is no longer through the opposing it to an ideal form of reality. In Urban time Leonel Moura superimposes a color face onto the urban views in black and white. A contrast is then made between the singularity of floating portrait "without a place to live" in the serial aspect of the architectural background. A committed work revealing the loss of identity of the human being, just like the competitive productivity in the western world. Installation (Kader Attia), video (Louidgi Beltrame), models (Avignon-Clouet, Alec De Busshère, Tadashi Kawamata), photographs (James Casebere) and drawings (Pierre Bismuth) form the basis of the exhibition and therefore reflect the diversity of expressions in line with the evolution of the city.

Throughout the exhibition a space will be dedicated to the artist Clement Richem.
"The clay architectures are built, but the time and the vagaries erode the land and buildings.
A struggle then committed against ruin.
Chance guide the evolution of the work that oscillates between construction and destruction." (Clement Richem)

Thus, the exhibition Artecitya aims to consider some reflexions and approaches to the city that the architects and the artists engaged through their work during the last sixty years. Fifteen projects from the most iconoclastic, innovative or forward-looking have been chosen to attest of an environment in constant reconfiguration.