I Give Everything Away. This exhibition of work on paper presents some of her most intimate oevres. The show begins with a labyrinthine presentation of Bourgeois's Insomnia Drawings, a remarkable suite of 220 drawings and writings made between November 1994 and June 1995. 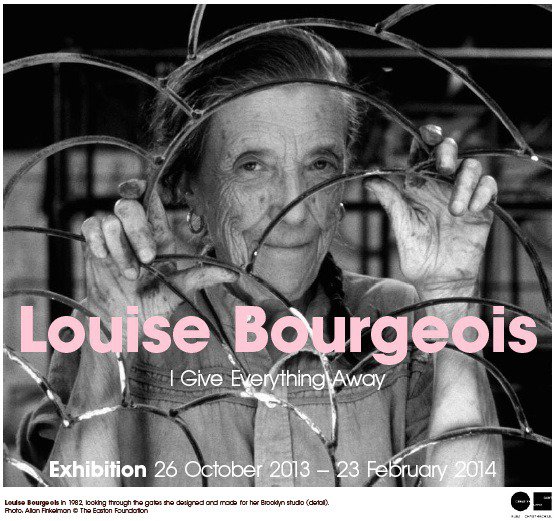 Louise Bourgeois is one of the greatest and most influential artists of our time. In a career spanning seven decades, from the 1940s until her death in 2010, she produced some of contemporary art’s most enduring images, making sculptures, installations, writings and drawings which, in mining her own psyche, have entered the collective unconscious.

Bourgeois’s work is personal yet universal, rooted in the details of her own life, but reaching out to touch the lives of others. This exhibition of work on paper presents some of her most intimate work, both drawing and writing.

The exhibition begins with a labyrinthine presentation of Bourgeois’s Insomnia Drawings, a remarkable suite of 220 drawings and writings made between November 1994 and June 1995 specifically to combat the insomnia which she once described as regulating her life. Created in the suspended state between sleeping and waking, The Insomnia Drawings contain all the major themes of Bourgeois’s work and reveal the close link between drawing and writing that is such a key part of her practice.

Also in the exhibition are two suites of large-scale works on paper, When Did This Happen? from 2007, and I Give Everything Away, made right at the end of the artist’s life in 2010. A mix of writing, drawing and printmaking, these large works are both haunted and haunting.

The exhibition is curated by Frances Morris, who curated The Fruitmarket Gallery’s 2004 exhibition of work by Louise Bourgeois, Stitches in Time, and the major retrospective of Bourgeois’s work at Tate Modern in 2007. Almost exactly ten years after first showing the work of this extraordinary artist to audiences in Edinburgh, The Fruitmarket Gallery is proud to present this new exhibition which, in focusing on drawing and writing, cuts to the heart of Louise Bourgeois’s art, providing both a key to and a celebration of her unique creative energy.

Louise Bourgeois (1911–2010) was born in France and studied with Fernand Léger in Paris during the 1930s. She moved to New York in 1937, following her marriage to Robert Goldwater, an authority on African art and Director of the Museum of Primitive Art, who died in 1973. Bourgeois’s earliest works were often seen in the context of Surrealism. It was not until the last quarter of her career, when she entered an extraordinarily fertile period of creativity – in part due to her researches into psychoanalysis – that her achievements became recognised.

Frances Morris is Head of Collections (International Art) at Tate. Formerly Head of Displays at Tate Modern, she oversaw the opening display of the collection in 2000 and its first major rehang in 2006. Past exhibitions include Tate Modern’s recent retrospective of Yayoi Kusama in 2012 and the major retrospective of Louise Bourgeois which opened at Tate Modern in October 2007. She is currently working on a retrospective exhibition of Agnes Martin.

This exhibition complements a major ARTIST ROOMS exhibition of work by Louise Bourgeois on display at the Scottish National Gallery of Modern Art – Louise Bourgeois, A Woman Without Secrets, Modern One, 26 October 2013–18 May 2014.

New publication
Has the day invaded the night or the night invaded the day?
Insomnia in the work of Louise Bourgeois
Published by The Fruitmarket Gallery to accompany the exhibition, this book focuses on the themes and ideas in the exhibition. The book is illustrated with a selection of Bourgeois's Insomnia Drawings and of her writings, and also includes new texts by Frances Morris and Philip Larratt-Smith. Buy here.

Curator's talk
Wednesday 15 January 2014, 6:30pm
Exhibition curator Frances Morris (Tate) considers the work in the exhibition in light of the artist's larger practice in conversation with Fiona Bradley, Director of The Fruitmarket Gallery.

Future Bourgeois: panel discussion
Friday 7 February 2014, 6pm
The artist Phyllida Barlow, the writer Elisabeth Lebovici (EHESS, Paris) and Professor Mignon Nixon (Courtauld, London) consider the current state of research on Louise Bourgeois in this panel discussion. The event brings to a close a collaborative one-day student symposium organised by the ARTIST ROOMS RESEARCH PARTNERSHIP, The Fruitmarket Gallery and National Galleries of Scotland (and held at the Scottish National Gallery of Modern Art, Modern One) that showcases new research on the artist.