Ten Thousand Waves. An immersive, large-scale installation will be projected onto 9 double-sided screens in a unique arrangement. Julien poetically interweaves contemporary Chinese culture with its ancient myths-including the fable of the goddess Mazu, which comes from the Fujian Province, from where the Morecambe Bay workers originated. 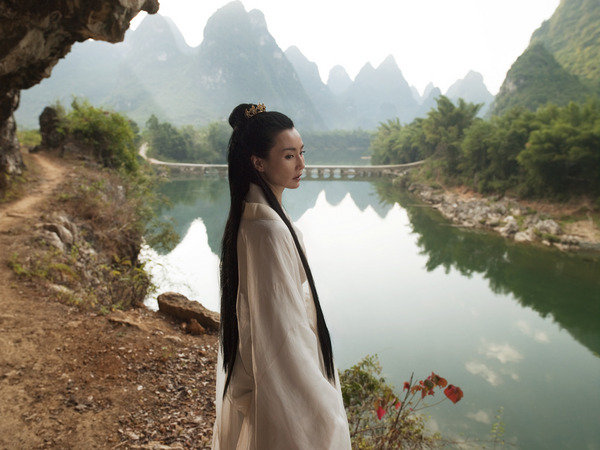 Ten Thousand Waves (2010) is an immersive film installation projected onto nine double-sided screens arranged in a dynamic structure. Especially conceived for The Donald B. and Catherine C. Marron Atrium, the installation choreographs visitors’ movement through the space. The original inspiration for the recently acquired, 50-minute moving image installation was the Morecambe Bay tragedy of 2004, in which more than 20 Chinese cockle pickers drowned on a flooded sandbank off the coast in northwest England.

Julien poetically interweaves contemporary Chinese culture with its ancient myths—including the fable of the goddess Mazu (played by Maggie Cheung), which comes from the Fujian Province, from where the Morecambe Bay workers originated. In one section, the Tale of Yishan Island, Julien recounts the story of 16th-century fishermen lost and imperiled at sea. Central to the legend is the sea goddess figure who leads the fishermen to safety. In a preceding section, shot at the Shanghai Film Studios, actress Zhao Tao takes part in a re-enactment of the classic 1930s Chinese film The Goddess. Additional collaborators include calligrapher Gong Fagen, the film and video artist Yang Fudong, cinematographer Zhao Xiaoshi and poet Wang Ping from whom Julien commissioned “Small Boats”, a poem that is recited in Ten Thousand Waves.

The installation is staged on the streets of both modern and old Shanghai, and includes music and sounds that fuse Eastern and Western traditions. The installation’s sound structure is as immersive as its sequenced images, with contributions from, among others, London-based musician Jah Wobble and the Chinese Dub Orchestra, and an original score by Spanish contemporary classical composer Maria de Alvear.

London-based Julien is an internationally acclaimed artist and filmmaker. After graduating from St. Martin’s School of Art in London in 1984, he came to prominence with his 1989 drama-documentary Looking for Langston, a poetic exploration of Langston Hughes and the Harlem Renaissance. Informed by his film background, Julien’s gallery installations form fractured narratives that reflect a critical thinking about race, globalization, and representation. In 2008 MoMA coproduced Julien’s film Derek (2008), a filmic biography of the late British filmmaker Derek Jarman.

Ten Thousand Waves was conceived and created over four years. In a reflection of the movement of people across continents, audiences move freely around the Marron Atrium with the ability to watch from whatever vantage points they choose.

To accompany its presentation of Isaac Julien: Ten Thousand Waves, MoMA is publishing Isaac Julien: Riot, an intellectual and professional autobiography of the artist and filmmaker whose trailblazing career has moved across film and art and through the forms of documentary, biography, dance, narrative film, and multiscreen installation. With texts by Julien as well as Cynthia Rose, Paul Gilroy, Kobena Mercer, B. Ruby Rich, bell hooks, Mark Nash, Giuliana Bruno, Christine Van Assche, Laura Mulvey, and Stuart Hall, Riot is the first book to provide a career-long overview of this important artist’s work and to situate it in the context of his personal and intellectual development: the friendships, mentors, films, politics, records, and artworks that have informed his practice.

Isaac Julien (b. 1960) is an internationally acclaimed artist and filmmaker based in London whose work incorporates different artistic disciplines, drawing from and commenting on film, dance, photography, music, theater, painting, and sculpture, and uniting them to create a unique poetic visual language in audiovisual film installations. He came to prominence with his 1989 drama-documentary Looking for Langston, a poetic exploration of Langston Hughes and the Harlem Renaissance. His 1991 film Young Soul Rebels won the Semaine de la Critique prize at the Cannes Film Festival. Informed by his film background, Julien’s gallery installations form fractured narratives that reflect critical thinking about race, globalization, and representation.
Julien was nominated for the Turner Prize in 2001 for his film installations The Long Road to Mazatlán (1999) and Vagabondia (2000). His acclaimed five-screen installation WESTERN UNION: small boats (2007) has been shown at Metro Pictures, New York; Galería Helga de Alvear, Madrid; and Centre for Contemporary Arts, Warsaw; and is also in the Museum Brandhorst collection in Munich. In 2008 MoMA coproduced Julien’s and Tilda Swinton's collaborative film project Derek (2008), a filmic biography of the late British filmmaker Derek Jarman, which premiered at the Sundance Film Festival the same year. Ten Thousand Waves (2010) has been on display in cities in more than 15 countries so far, including Shanghai, Sydney, Madrid, Helsinki, Sao Paolo, Gwangju (Korea), Gothenburg, Moscow, New York, Miami, and London.

Video projectors are provided by Christie® with additional support from Michael Andrews.

To mark the final weeks of Ten Thousand Waves, the Department of Film presents a survey of films by Isaac Julien on February 7–10, including short and feature films from the 1980s to the present. Emerging in the neighboring club cultures of funk, disco, and soul; leftist political activism; and collectivism in British independent filmmaking, Julien made his first films as a student at Central Saint Martins.