The structure of things

The Structure of Things is a group exhibition by London-based artists, bringing together sculpture, video, and drawing. The show builds on the artists' dialogue and views on what structure can be, whether imagined or real and tested. 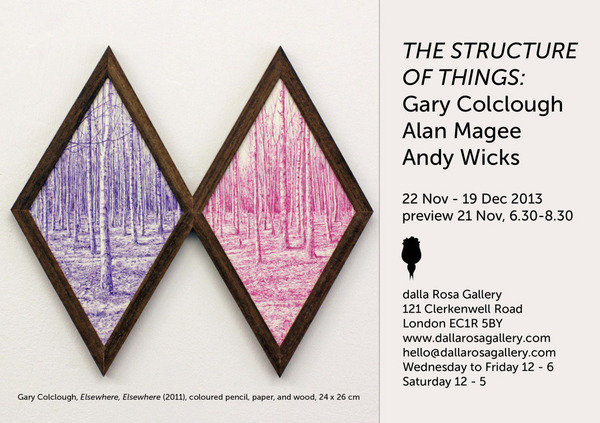 The Structure of Things is a group exhibition by London-based artists Gary Colclough, Alan Magee, and Andy Wicks, bringing together sculpture, video, and drawing. The show builds on the artists' dialogue and views on what structure can be, whether imagined or real and tested. The result is a collection of images and objects which reflect the artists' close relationship with medium, with an emphasis on wood.

Alan Magee employs video to document the repeated collapse of a table and chair, almost echoing a childhood game with a destabilising twist. In Andy Wicks’ work references to wooden mooring structures are abstracted into diagrammatic images, whilst Gary Colclough’s geometric wooden structures take on a subtle functionality becoming a supporting frame for hand-drawn images. The structures in the exhibition are transformed, presented, and represented through a process of knowing labour; time is invested and the hand is employed into frameworks of value and production.

The intricate construction of Gary Colclough’s sculptures draw on references to Arts & Craft furniture, esoteric geometry and early optical contraptions. Using a pared down sculptural language, Colclough’s meticulously built structures both suspend and frame hand-drawn images. These monochrome images are painstakingly rendered in coloured pencil, recalling early natural history illustrations but inscribed with an apocalyptic presence. Examining the history of pictorial landscape Colclough unsettles the viewer's experience through duplication and separation, drawing attention to the experience and mechanics of seeing itself.

Combining moving image and sculpture Alan Magee’s work playfully explores the nature and potential of the domestic object and his ability to affect it. Through a series of transformations the same object loses and regains function, with action and context. Magee develops a kind of existentialism of labour, as he attempts to find a place in the world through his working process. The title of his sculpture, Over and over again, pessimistically draws reference to a Sisyphean struggle, yet also optimistically celebrates the potential within the objects materiality.

There are shades of the otherworldly in the paintings of Andy Wicks. The form and patina of real world equivalents are represented in a painterly tribute with use of heavy flax or raw polyester. The Plane Sight series sees man-made forms stripped of any recognisable feature. Instead a reductive line traces the very essence of the structure, creating an image more akin to a primitive language or architectural blueprint. Each drawn image is combined with chaotic eddies of paint, suggestive of galactic swirls, bringing with them an impossibility of scale.