1970s Solid Light Works. The exhibition will showcase three of the artist's seminal "solid-light" films which were produced in the early 1970s in New York, including the live, long-duration performance Four Projected Movements (1975), presented in its original form for the first time since 1975. 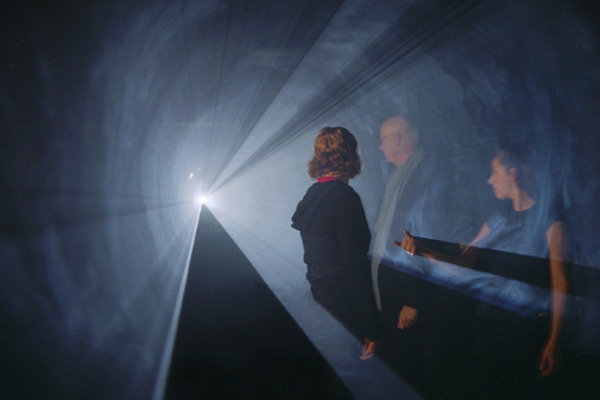 Internationally recognized for groundbreaking work which occupies a space between sculpture, cinema and drawing, Anthony McCall’s practice has influenced a generation of artists working with film and installation. The exhibition at Sprüth Magers Berlin will showcase three of the artist’s seminal ‘solid-light’ films which were produced in the early 1970s in New York, including the live, long-duration performance Four Projected Movements (1975), presented in its original form for the first time since 1975.

Anthony McCall’s early work focused on open-air performance. The artist initially took up filmmaking in order to record such performance works, which, in turn, led to an increasing interest in the medium of film itself, and the idea of making films that existed only in the present tense at the very moment of projection. His 16mm films from this early period deal with the projected beam itself, rather than treating the light beam as a mere carrier of coded information, which is decoded when it strikes a flat surface. The works maintain a horizontal orientation, the projections occupying the length of a room with the projector one end, the projected line-drawing (the image) on the wall at the other end and the luminous conical object occupying the space in between. In these solid-light installations, McCall deconstructs cinema by reducing the medium of film to its most basic elements of time and light.

At the same time, the idea of cinema is expanded to incorporate sculptural space, with the complex three- dimensional chambers of light which imperceptibly alter and shift based on a controlling durational structure. It was in part from Expanded Cinema that the idea of installation art developed, and which the works in this show are key early examples of.

For the show in Berlin, the main gallery will be divided into three areas by floor to ceiling walls, the large windows concealed, immersing the space into darkness. At the center of the exhibition will be Line Describing a Cone (1973), the first in the artist’s series of ‘solid-light’ films, in which a volumetric form composed of projected light slowly materializes in three-dimensional space. The spectator has a participatory role in the apprehending of the work. While each viewing position presents a different aspect, the audience members also have to negotiate the dark area in relation to one another, meaning a second level of interaction occurs when more than just a few individuals watch the film collectively.

The issues of scale and the body, and of moving around a three- dimensional object in a three-dimensional space, are sculptural issues, and part of the resonance of the experience of looking at them is drawn from this. Control of disclosure over time, the representation of movement, the interchangeability of forms through editing and the fact that the works must be viewed in the dark are all properties of cinema, meaning the experience of the work depends equally on its relationship to both sculpture and film.

Shortly after Line Describing a Cone, McCall worked on a series of short films which created an illusion of movement using drawing as an image source. Conical Solid (1974), a 10-minute film on display in the first room, sets up a flat blade of light rotating from a fixed central axis. The work has been made using a simple animation technique, starting with a line drawing, created with white gouache and a ruling pen on black paper. The line drawing is then placed under the camera one frame or a few frames at a time, each time moving the line a fraction to the next position, creating the illusion of motion.

While Line Describing a Cone and Conical Solid both show continuously with loopers, the seminal work Four Projected Movements (1975) will be projected live using a single projector. In this rarely shown work, four entirely different spatial movements are created by the same fifteen-minute reel of film, passed through the projector in each of the four possible ways; forwards, backwards, forwards back to front and backwards back to front. The projector itself is the agent of change, controlled by a living projectionist, and it is this physical element which is integral to the work and makes it a very early example of 'long-duration performance' as well as of installation art.

The film directly addresses the architectural space itself, the projector positioned on the floor in the corner of the room so that the adjacent wall and the floor establish the boundaries of the space through which the beams travel. Representing a slow transition through ninety degrees, from vertical to horizontal, the plane of light once again has an effect on the visitors themselves, variously making them feel pushed in one direction and the other, a paradoxical experience, since light, even ‘solid’ light, is insubstantial.

On display in the viewing room will be a selection of working drawings and photographs relating to the three installations. In addition, a number of the artist’s original notebooks from the 1970s will be on view, providing an insight into the planning and production of the works in the exhibition.