Hysterical Men. The pictures develop through walking. Olesen sets the direction, like in writing, letting the lines fall off to the right. For us, he disassembles the pictures to fragments and pieces them back together again. 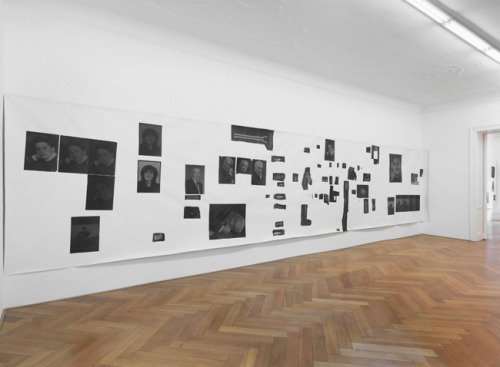 I report that on one beautiful morning, I am not sure at exactly what time, as the desire to take a walk came upon me, I put my hat on my head, left my writing room, or room of phantoms, and ran down the stairs to hurry out into the street.
So begins Robert Walser’s novella The Walk and the sentence is found, with two further passages from the same piece, right at the start of Henrik Olesen’s exhibition - so to say, in the very foyer. Robert Walser’s man on a walk sets on his way, immediately meeting a Spanish-looking lady and then, directly afterwards, Professor Mehli, who consists of walking stick, nose, eyes, and hat. These all being very meaningful parts of the Professor, each of which having their own story, each of which offering further consideration, until something new that he sees wrenches the man on the walk from such thoughts.

Henrik Olesen sends the gallery visitor on a walk as well. – In the hallway, one quick last glance in the mirror. Everything is still there. Then around the corner, then around this way and likewise one is greeted immediately with a number of acquaintances, faces which ring up names, people of whom one knows a thing or two. Now one begins to tell the stories of these people to oneself. However, before one looses oneself too far in thought, something comes - as it is, when one is on a walk - in between. Another picture, a detail reminding of something else, one relates it perhaps to the previous picture and continues on. One could wander into dark thoughts - after all, several of the people are dead or jailed - but precisely this is not Henrik Olesen’s intention, and so he suggests, at least in thought, to free the pictures from prison by walking on one’s head for a time. So Dominique Strauss-Kahn tips over and turns upside down.
The pictures develop through walking. Henrik Olesen sets the direction, like in writing, letting the lines fall off to the right. For us, he disassembles the pictures to fragments and pieces them back together again. This he does with an unbelievably generous spirit, forcing no one to think towards a certain someplace, insisting on nothing. To keep the beholder from becoming sad, he or she is given a comb as a gift. You can make this kind of comb into a mustache by hanging it under your nose.

Hysterical Men I und II, both pictures emerge from pictures already present, all actually part of reality, but Henrik Olesen doesn’t want the pictures ordered so as they are normally presented to us and reorders, finds details, dashes them in lines, then remembers one thing, and places it somewhere else. The hands here, the feet there. This is actually only logical (says he).
As the stories of power, betrayal, sexual hierarchy and morals we know from these people, rather some of these pictures, are sinister enough, Olesen’s picture becomes ever more bleak the further in the beholder progresses on the walk. But here too, as if in consolation, one sees, way up on the right, at the end of the roll of paper, where the writing begins again, Hanne Darboven pictured, because, to Henrik’s joy, she signed her last works together with Mickey, her goat.

At the end of the walk, Henrik Olesen has changed a doorway into a walk-in closet. Seen from the hallway, it appears as though one of the two doors has disappeared into the big exhibition room - on the other side it continues, but the other entrance is gone. One enters the closet through a door that has been rehung and initially came from the bourgeois apartment the gallery once was. Apparently such a closet is easily incorporated into such a facility of the bourgeoisie - it looks as though it has always been there, yes, even as though it were one of the founding elements, and if one did not know it had been installed it would perhaps remain hidden, as it is in all forms interior, whereas the T-shirts were at first Henrik Olesen’s contribution to an exhibition in public space and herewith perhaps the body being thought of as public space, in any case, one carries them about on the body in public space. Printed upon them are simple illustrations of six separate categories of Sex, whereby here too a screw is turned one rotation tighter than can be described by this text in its offered brevity.