World of objects. The exhibition focuses specifically on objects in domestic environments and thereby remains related to the thinking behind the recent Living With Art show(s) at the gallery. 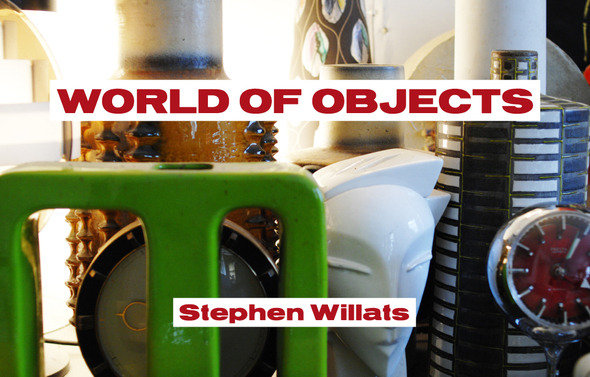 The Galerie Reinhard Hauff is delighted to present WORLD OF OBJECTS - its 5th solo show with Stephen Willats. The exhibition focuses specifically on objects in domestic environments and thereby remains related to the thinking behind the recent Living With Art show(s) at the gallery. For over five decades, the work of Stephen Willats has evolved out of complex projects collaborating with the audience in media ranging from sculpture, photography, film and drawing to large-scale installations, interactive performative collages and a host of theoretical publications. The Galerie Reinhard Hauff has exhibited significant work groups by this seminal figure in British Conceptual Art since opening with a Willats show in 1995. While this show is running, Stephen Willats will also be participating in Pop Art Design at the Barbican Art Gallery, London,- the first comprehensive exhibition to explore the exchange of ideas between artists and designers in the Pop age, (In collaboration with Vitra Design Museum, Louisiana Museum of Modern Art, Moderna Museet, Stockholm).

In a range of multi-panel compositions, multichannel video and wall installations from the late eighties until today, the central theme of the works in WORLD OF OBJECTS is the inter-relationship between objects and people. Objects that can be tools or used to demonstrate the meaning of the world we create around ourselves. Objects that can be chosen to function or decorate our homes and the corresponding reality that the blocks in which many of us live, are themselves expressions of institutional objects. Within this context, Willats sees the main role of „The Artist as instigator of Changes in Social Cognition and Behaviour „ (from a paper he wrote while directing the Centre for Behavioural Art, a cross-disciplinary research and discussion platform he established in London, in 1972–73). Whereas museums are authoritative institutional worlds of objects, the „real world“ is an interactive world of people, who continuously endeavour to assert themselves and their individuality. Willats observes that „the way a person codes his or her home reflects a desired or actual position within a community and are manifestations of a persons social history“ (Life Codes, Behaviour Parameters, 1974). In WORLD OF OBJECTS, Willats works with decorative objects such as vases, clocks and lamps as a system of visual signs and relationships utilizing diagrammatic and interactive elements to function as information systems. This idea comes from Cybernetics - scientific models developed in the science of communications and automatic control systems in machines and living things. Willats has made a group of such works and wall installations called Cybernetic Still Life these past years. In the show, the relationship of a changing sequence of decorative objects and vases in reductive and monumental architectural diagrams suggest possible identities and establishes a symbolic relationship between the architecture of domestic objects and the buildings in which they are contained.

The spectator is the ever-present dimension in Willats’ art, encouraged and guided by the artist into a participative creative process stimulating the awareness of personal empowerment. Feedback takes precedence over aesthetic and material concerns. The process replaces the product and locates the art in the interactive system rather than in a material object.

When Willats started out as a young artist he found that there was no critical questioning of social reality in contemporary and previous art practice. He set out to subvert the passive consumption of monumental and untouchable institutional Art and to engage the end user as active participants in the creative process. Instigating interactive situations that – as a change - undermine conventional subject-object relationships between art and audience is as relevant today as it was in the early 1970’s.