Afterform. The central work in the exhibition is a digital animation. Variously sized collages are on view, which are made through the superposition of elements from previous works made by the artist. 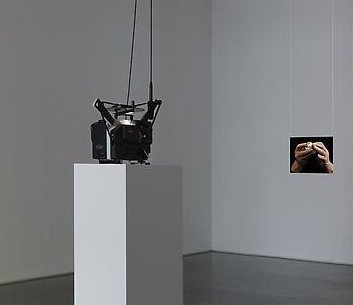 Annet Gelink Gallery is pleased to present Afterform, the fourth solo exhibition of David Maljkovic at the gallery.

Much of Maljkovic’s work focuses on the questioning of the reality of art and the examination of the legacy of Modernism.

In the central work in the exhibition Afterform, Maljkovic, for the very first time explores the medium of digital animation. Shown in the main room, the five-minute long projected animation Afterform, 2013 is presented on a large white pedestal, placed on a stage. It is inspired by a cartoon published in a Croatian architectural magazine from the 1960s which satirized modern architecture and urban planning. The artist manipulates the original animation by adding his own elements to the commentary and so looks forward by re-evaluating the past.

This is also something he does with his own work. Variously sized collages will be on view, which are made through the superposition of elements from previous works made by the artist. These collages further emphasise Maljkovic’s practice of constantly cutting and arranging elements from the past to create new forms and situations.
In the second space, the Bakery, Maljkovic will show Undated, 2013. For this 16 mm film, Maljkovic filmed the 90-yearold Croatian sculptor Ivan Kozaric at work, sculpting an amorphous form. The artist later isolated, extracted and digitally manipulated this form during post-production. This manipulation is shown by the way the work is installed: a microphone is placed over the film projector, causing its sound to be amplified and distorted.