For this monographic presentation, Uklanski has appropriated the slang term of ESL (English as a Second Language) as a unifying title for the exploration of his protean work and as a broad interpretative metaphor for his iconoclastic art practice. 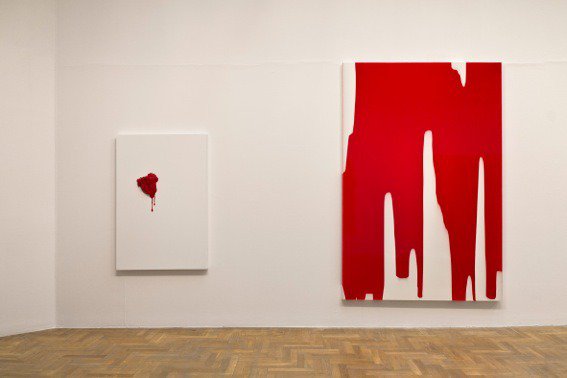 Emerging in the mid-nineteen-nineties, Piotr Uklański has created a provocative and expansive body of work that defies categorization. He has engaged in nearly all forms of visual media such as installation, large-scale paper reliefs, tie-dye paintings, textile based immersive sculptures, resin-based sculptures and paintings, photography, performance and a feature-length film, Summer Love. For this monographic presentation at the Bass Museum of Art, Uklański has appropriated the slang term of ESL (English as a Second Language) as a unifying title for this exploration of his protean work.

While the notion of “second language” makes a reference to Uklański’s foreign birth, the application of this theme in the Bass Museum of Art show transcends the literal understanding of his status as an immigrant in America. With the exception of two works in the exhibition’s opening gallery—a tie-dyed American flag Untitled (Priceless), 2012 and Untitled (T-Shirt), 2002 an origami folded US dollar bill note —this exhibition does not uniquely focus on the themes of identity politics. Instead, Uklański proposes the notion of ESL as a broad interpretative metaphor for his iconoclastic art practice.

ESL features a wide-ranging selection of Uklański’s “meta-paintings”—or pictorial works that challenge the conventional definition of painting. Using a distinctive range of unconventional materials such as ceramic pottery, pencil shavings, torn paper, embroidery, resin or dyed textiles as his palette, Uklański makes works that purposefully reference the canon of Modernist painting without reproducing the methods or specific subjects of that mainstream iconography. This overview of Uklański’s diverse art practice illustrates the underlying analogies between his use of specific artistic vernaculars and a non-native speaker’s unorthodox use of grammar or awkward pronunciation in using a second language.

As Uklański has explained, “My work takes up the ‘dialect’ of fiber art or the ‘idioms’ of Art Informel, Abstract Expressionism or Color Field painting quite deliberately. Instead of trying to assimilate or hide the markers of my difference—whether in terms of my own ‘heavy accent’, or the idiosyncratic aesthetic of my art practice—ESL metaphorically celebrates moments of cultural and artistic disconnect in my work.”