Sofia Hulten delicately occupies herself in videos, installations, sculptures and photographs. Jacqueline Hoang Nguyen explores a forgotten landmark and its history in her multi-part installation. Presentation of Annual Editions 2013/14. 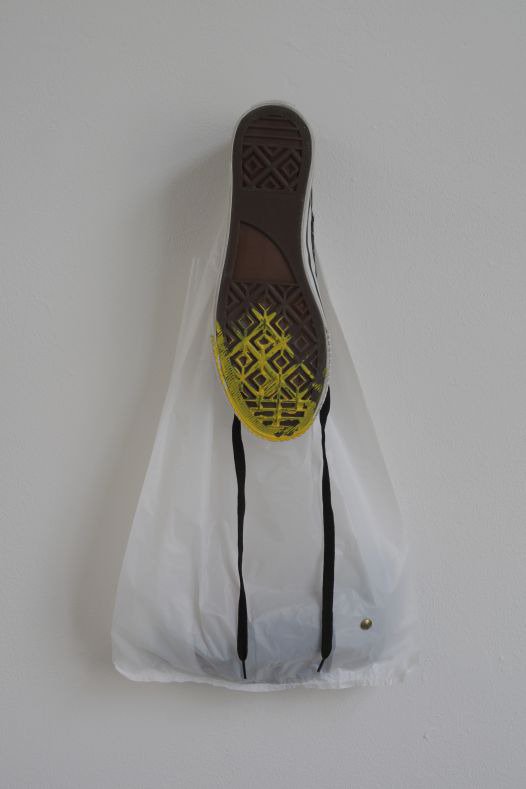 Sofia Hultén (b. 1972 in Stockholm, lives in Berlin) delicately occupies herself in her videos, installations, sculptures and photographs with the wide variety of opportunities for action. By reconstructing or rearranging courses of events she explores in the process banal everyday procedures like eating an apple as well as the character and history of profane objects with little value like a worn piece of wood or an old toolbox she finds at construction or demolition sites. She hence regularly succeeds in breaking through conventional patterns of perception and tracing unknown dimensions in the everyday.

In Versions of Events (2011), for example, she plays out the different variants of occurrences alluded to in the title by altering the seemingly predictable causality of the course of events and in doing, triggers a chain reaction. But the actions that resulted in the six different sculptures that each consist of stockings, a gym shoe, a pin and a plastic bag remains just as ambiguous as the consequences they will have. In general, the objects in Sofia Hultén's works appear as fragments from narrative larger context, similar to the momentary occurrences in a short story. At the same time, however, the varying plotlines indicate that things are not static and inflexible but are found instead in a continuum of time and space consisting of the past, present and future. By employing philosophical and physics texts in addition to Science Fiction literature for her subtle works, Hultén regularly poses the question 'What if …' again.

Along with the 2009 Kunstfond Grant and other prizes, Sofia Hultén received the 2011 Moderna Museets Vänner Sculpture Award and participated in international group exhibitions at the National Gallery of Iceland (2012) and the Today Art Museum Beijing (2010). Her work has also been seen at solo shows organised by the Langen Foundation, Neuss (2012), the Künstlerhaus Bremen (2008) and the Kunstverein Nürnberg (2007). The exhibition catalogue will e published in early 2014.

The exhibition is supported by: Ministry for Science and Culture of Lower Saxony, Stiftung Braunschweigischer Kulturbesitz, Swedish Embassy

Jacqueline Hoang Nguyen explores a forgotten landmark and its history in her multi-part installation Space Fiction & the Archives: the world's first UFO landing pad. Built in the Canadian town of St. Paul, Alberta, on the occasion of the celebrations honouring Canada's centennial in 1967, it was intended to symbolise the country's cosmo(s)politanism. At a time of extreme political tension in the United States, Europe and the former Soviet Union, Canada was undergoing a period of festive euphoria, hosting Expo '67 in Montreal and becoming a pioneer of multiculturalism with its demonstrative urbanity. Nguyen's exhibition encompassing a film (1967: A People Kind of Place) and a collection of documents, photographs and sculptures takes the viewer on a trip back through time to this incongruous episode of Canadian history. Science fiction and identity politics enter in the process into an unconventional relationship that poses questions regarding the ideological structure of a multicultural society and the concept of the 'alien'.

Jacqueline Hoang Nguyen (born 1979 in Montreal, lives in Brooklyn and Stockholm) studied in Montreal, Malmő and New York City, and has already been awarded a number of prizes and grants, including from the Canada Council for the Arts (2012) and Iaspis, Swedish Arts Grants Committee (2010). Her most recent solo exhibitions could be seen at VOX: Centre de l'image contemporaine, Montreal (2012) and the Skånska Konstmuseum, Lund (2009).

The exhibition is supported by: Ministry for Science and Culture of Lower Saxony, Embassy of Canada.
Thanks to: VOX. Centre de l'image contemporaine