Supernatural: Religious, Theological & Spiritual Leaders series. New paintings consisting of 7 portraits and one painting of the natural world arising from an interest in innate divinity of humans. 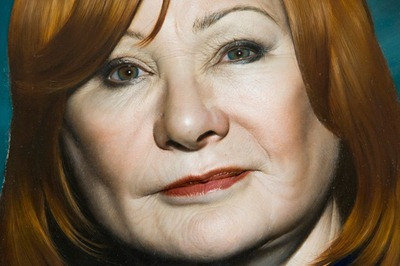 DEAN PROJECT is pleased to present Supernatural: Religious, Theological & Spiritual Leaders, an exhibition of new paintings by Bryan Drury. This is the artist’s third solo exhibition at the gallery and features eight oil-on-wood paintings, consisting of seven portraits and one painting of the natural world Arising from a broad interest in the ubiquity of religion and the belief in the innate divinity of humans, to create this series Drury met with diverse religious, spiritual, and theological leaders from around the world. The resulting work brings together an eclectic range of venerated leaders who are believed, within their distinctive faith traditions and philosophies, to possess a unique capacity to understand or connect with the divine realm.

Employing the same highly detailed realism found in his other works, Drury exploits the oil-paint medium to meticulously render the topography and organic quality of the sitters’ flesh, contrasting their physicality with the divine nature that they embody within their respective traditions. In his painting of Rabbi Saul Kassin, every wrinkle and hair follicle is exposed in the face of the rabbi, who gazes nobly and pensively at the viewer. The soft creases in the skin of Gyumed Khensur Rinpoche Lobsang Jampa, a Buddhist leader who studied under the Dalai Lama, highlight the tactility of the sitter’s skin, calling attention to the mortal aspect of his being.

In these seven portraits, Drury further explores his interest in the human desire to transcend our animal nature, an idea he also investigated in his previous work. He exposes the disconnect between the corporeality of the body and the abstraction of identity, which exists across cultures, religions, and societies.

Red-Tail, which depicts a hawk devouring its prey, captures the mortality of life in the animal world, creating a striking contrast with the high finish and immortal nature of the portraits.

Bryan Drury was born in 1980 in Salt Lake City, Utah and relocated to New York in 2001. He received his MFA Cum Laude from the New York Academy of Art in 2007 and his BFA from The Cooper Union School of Art in 2005. He has exhibited and received awards throughout the US and Europe. Among his recent highlights, Drury had a solo museum exhibition at The Faulconer Gallery at Grinnell College in 2010, and The American Academy of Arts and Letters, New York, selected Drury for their highly prestigious annual Invitational Exhibition 2011. The artist was profiled in the April 2011 issue of The Art Economist magazine’s "Artist To Watch" section. Drury’s painting Ali was included in the exhibition "Now WHAT?" at the Norton Museum of Art, Palm Beach FL, the curators from the Norton Museum selected Ali as one of the twenty most engaging works exhibited during 2010 Art Basel Miami Beach.
The artist was reviewed by Ken Johnson for The New York Times Art in Review on February 3, 2012.