Aspects of Travesty. The first such reunion to commemorate the exhibition which deals with the aesthetics of desire and sexuality through travesty and drag performance. It include works from all the artists featured in 1974: Luciano Castelli, Urs Luthi, Luigi Ontani... 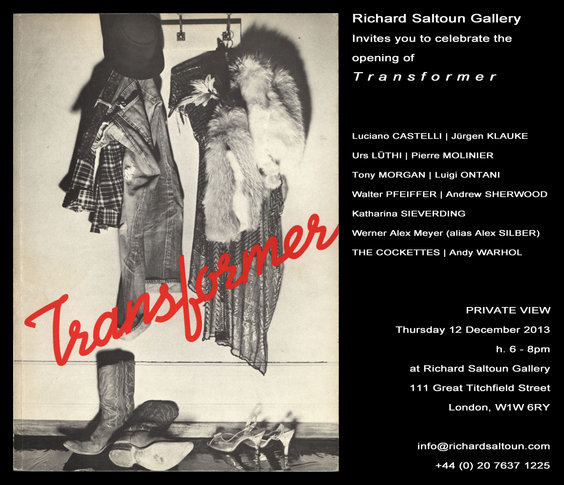 On the 40th anniversary of 'Transformer: Aspects of Travesty' - a groundbreaking show curated by Jean-Christophe Ammann in 1974 - Richard Saltoun Gallery announces a re-proposition of the original exhibition, that will reunite all the artists, in London. This is the first such reunion to commemorate the exhibition which deals with the aesthetics of desire and sexuality through travesty and drag performance.

Transformer looks back at the '70s contemporary society and art practice, considering the aspects of transvestism and sexual self-reflection in art. The exhibition takes its title from the seminal 1972 album by recently deceased Lou Reed, finding its parallel in the worlds of fashion and glam-rock. Transformer examines the politics and aesthetics of transgressing identity and at the disruptive sexualisation of masculinity by incorporating characters usually labelled as 'feminine', as Brian Eno reflected with a text written for the original catalogue. The exhibitionopened at the Kunstmuseum Lucerne, Switzerland and was an extraordinary cultural event: the opening was recorded by Swiss TV and it toured later to Germany and Austria. Whilst the exhibition received no publicity in the UK, it has been influential for art theory and history, since it was the first occasion that sought to theorise transvestism and which explored non-normative sexualities and the production of identity.

References to Transformer have recently appeared in Glam! The Performance of Style, Tate Liverpool, Kunsthalle Frankfurt and Kunstmuseum Linz (2013) and in A Bigger Splash: Painting After Performance, Tate Modern (2013). The exhibition at Richard Saltoun Gallery will contain the sexually explicit content of the exhibition and show the lesser-known artists originally included. A series of events curated by Giulia Casalini - to include screenings, talks and performances - will be announced nearer the time.

Luciano Castelli (b. 1951, Lucerne, Switzerland) rose to fame in the early '70s when he debuted in Documenta 5 (1972), for which he made a series of terracotta sculptures representing women's knickers. Later series include large photographic self-portraits in cross-dressing. A retrospective of Castelli will be held at Maison Européenne de la Photographie, Paris, in 2014.

Jürgen Klauke (b. 1943, Koln, Germany) explores the body in relation to the self and to the other in his Transformer series (1970-75), in which he appears dressed in red leather and uses prosthesis and phallic surrogates as part of his body. Recent solo shows at Museum der Moderne, Salzburg (2011) and Kunst Und Kulturzentrum, Aachen (2012).

Urs Lüthi (b. 1947, Lucerne, Switzerland). In the '70s, he explored the 'self' through a series of photographs that aimed to create a dialogue between the artist and his feminine 'other', and by exploring notions of failure contingent to the self-portrait genre. Recent solo shows include MACRO, Rome (2010) and Centre Culturel Suisse, Paris(2011).

Luigi Ontani (b. 1943, Vergato, Italy). His famous series of hand-coloured photographic tableaux vivants from the '70s (inspired by a trip to India) represent the artist and other young men, alluding to the creation of a personal, sensual and self-reflective mythology. Recent solo exhibitions include Museo di Capodimonte, Naples (2009) & MoMA PS1, New York (2011).

Walter Pfeiffer (b. 1946, Zurich, Switzerland) is a photographer whose subjects have included the non-conventional representation of the male body and of his sexuality, with a focus on homosexual desire and imagery. He has collaborated with magazines Butt, i-D, VICE and Vogue. The retrospective Walter Pfeiffer: In love with beauty was held at Fotomuseum, Winterthur(2008).

Andrew Sherwood (b. 1935, Wilmington, Delaware, USA) is a photographer famous for his intimate portraits of Warhol Superstar Jackie Curtis and of George Harris (aka Hibiscus) who was part of the San Francisco-based queer performance group The Cockettes. A solo show was held at Centre Pompidou, Paris (1978).

Katharina Sieverding (b. 1944, Prague) adopted installation and photography to explore her own image and her shifting female identity in the '70s. The only woman in the original Transformer exhibition, she represents her image as if in drag by also including the masculine features. Solo exhibitions include the German Pavilion at the 1997 Biennale, Venice, and a retrospective at PS1/MoMA, New York (2004).

Werner Alex Meyer alias Alex Silber (b. 1950, Basel, Switzerland) adopted his pseudonym to embody an alter-ego that through drawing, text, photography and performance sensually and narcissistically reflected on his dual image and identity. Silber stages and produces a contemporary dandy whose image is close to the glam-rock music stars of that time.

The Cockettes (1969 - ). A psychedelic drag commune, founded in San Francisco in 1969 by George Harris, aka Hibiscus. The collective of performers (45 men, 3 women and 2 babies), expressed the ideals of freedom from societal constraints through their hippie consciousness, use of drag performance and regular consumption of drugs on stage.

Andy Warhol (b. 1928, Pittsburgh, Pennsylvania, USA-1987, New York). The artist surrounded himself with glamorous personalities (many of those transvestites), which he promoted as 'Superstars'. His films and work out of the Factory NYC were influential on the 1970s artistic scene for re-appropriating the aesthetics and values of pop culture, mainly reflected by Hollywood stardom.

Curator's Biography:
Giulia Casalini (b, 1988, Modena, Italy) is a curator based in London. She works at Richard Saltoun Gallery and co-directs CUNTemporary (established 2012), a non-profit organisation dedicated to feminist and queer art practices and theories, which organises events and curates exhibitions.