Redefining Working Life. The exhibition will work with a range of artists, creative producers and researchers to experiment across venue, audience, workspace and digital space, transforming Fact into a hybrid between factory and exploratorium. 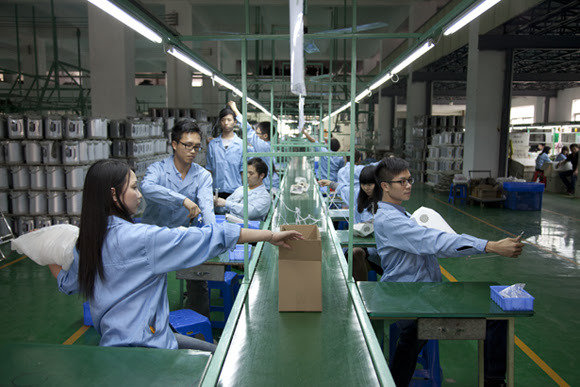 A Time & Motion Study is a scientific method - developed by Frederick Taylor and later by Frank and Lillian Gilbreth - used to analyse work procedures and determine the most efficient method of operation. This approach has been used extensively in workplaces including factories, hospitals, retail, and banks since the industrial age.

Using this as a starting point, the exhibition Time & Motion will use artworks, research projects, archival materials and interventions to track our journey through the world of work, from clocking on at the factory gates to checking in online from our home office or local entrepreneurial networking space. As our industrial economy has given way to a service and knowledge economy, producing ideas and experiences rather than artefacts, how have our patterns of day-to-day working life changed?

At a time of structural changes in the labour market, growing youth unemployment and sharp transitions in business practice to address global recession, the subject of rethinking working life is one that artists and designers have an obligation to explore.

A new online game What’s Your Number ( tm-888.co.uk ) commissioned by FACT and developed by the Royal College of Art invites people from all over the world to test their own understanding of their working life and the traditional notion of eight hours work, eight hours rest and eight hours play. Users will be encouraged to think about their working life in a new way as they answer a series of questions to reveal their own three-digit number. How many will be the traditional eight, eight, eight?

Time & Motion will work with a range of artists, creative producers and researchers to experiment across venue, audience, workspace and digital space, transforming FACT into a hybrid between factory and exploratorium.

The exhibition asks timely questions including ‘What happened to the eight hour day?’ ‘What is your work life balance?’ and ‘How has technology affected the way that you work?’ each encouraging the visitor to consider their own working life and the changes happening around them.

Cohen van Balen explores the nature of mass-manufacturing through new video commission 75 Watt. For this work, a product with no useful purpose was designed specifically to be made in China, its function only to choreograph a dance performed by the labourers manufacturing it.

Harun Farocki’s video Workers Leaving the Factory leads us through eleven decades of the act of departing our place of work, beginning with Lumiere’s footage of workers hurriedly exiting the gates of the photographic factory in Lyon. In his recent video work A New Product, Farocki filmed the meetings of a business consultancy specialising in the design of workspaces, offices and social zones, as they develop a new product to allow employees greater independence, flexible attendance and a more adaptable workspace.

Oliver Walker’s video installation One Pound depicts the lenth of time it takes workers from different parts of the world to earn the equivalent of £1. The films vary in length from several hours for some of the lowest paid to several seconds for well paid workers in finance, and with one film little over a second long.

Minimum Wage Machine by Blake Fall-Conroy allows anybody to work for minimum wage by fulfilling a simple, manual task. Turning the crank will yield one penny every 0.17 seconds, or £6.31 an hour (UK minimum wage), sparking discussion about the value of labour, the nature of minimum wage and capitalism as a whole.

During a residency at FACT earlier this year, Sam Meech collected punch cards detailing visitor’s working hours. These have been turned into a knitting pattern to create a banner to the contemporary working day, in which any hours worked outside of the traditional eight-hour day will appear as a glitch within the fabric.

Laborers of Love by Jeff Crouse and Stephanie Rothernberg explores how online culture has transformed how we think of pornography in terms of production and consumption. Visitors are invited to create and commission their sexual fantasy using mturk.com, an internet application that hires anonymous online workers to complete micro tasks that still require human intelligence.

Ex Google employee Andrew Norman Wilson’s video Workers Leaving the Googleplex investigates the marginalized class of Google Books’ "ScanOps" workers at their international headquarters in Silicon Valley while simultaneously chronicling the complex events surrounding his own dismissal from the company.

The Creative Exchange project Hybrid Lives is a co-working space open to the general public and features a series of design interventions intended to explore the way working life is changing for many people as technology enables different and more digitally mediated ways of communication, sharing, and collaboration to take place.

About FACT
FACT (Foundation for Art and Creative Technology) is the UK’s leading media arts centre, based in Liverpool and is focused on bringing people, art and technology together. FACT’s award-winning building houses three galleries, a café, bar and four cinema screens. Since the organisation was founded in 1988 (previously called Moviola), it has commissioned and presented over 250 new media and digital artworks from artists including Pipilotti Rist, Nam June Paik, Bill Viola, Apichatpong Weerasethakul and Isaac Julien.

About RCA Creative Exchange CX
The Creative Exchange (CX) project at the Royal College of Art  has a remit to explore the innovation potential of ‘digital public space’. It is one of four national knowledge exchange hubs funded by the Arts and Humanities Research Council (AHRC) as part of a large-scale initiative to expand the creative economy in the UK.
It aims to achieve this by connecting researchers in the arts and humanities with a range of creative and cultural organisations. The CX hub comprises research teams from the Royal College of Art’s Helen Hamlyn Centre for Design and School of Communication, Lancaster University’s Imagination Centre and Newcastle University’s Culture Lab.