Ambassador for the New. The museum pays tribute to the legacy of the legendary gallerist and collector Ileana Sonnabend with an exhibition of works reflecting the activities of her galleries in Paris and New York from the 1960s through the 1980s. Some 50 works by 41 artists, including Rauschenberg, Warhol, Jasper Johns, Robert Morris, Mario Merz... 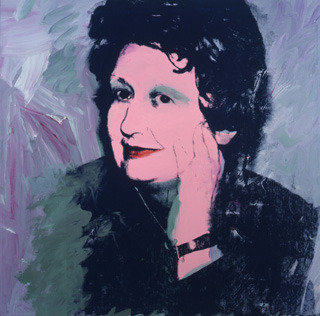 The Museum of Modern Art pays tribute to the legacy of the legendary gallerist and collector Ileana Sonnabend (1914–2007) with an exhibition of works reflecting the activities of her galleries in Paris and New York from the 1960s through the 1980s, revealing her remarkably prescient selection of the art of her time. Ileana Sonnabend: Ambassador for the New, on view from December 21, 2013, through April 21, 2014, celebrates the Sonnabend family’s generous 2012 gift of Robert Rauschenberg's Combine Canyon (1959) to MoMA, and salutes Sonnabend’s commitment to introducing groundbreaking art to the public.
Some 50 works by 41 artists, including Rauschenberg, Jasper Johns, Andy Warhol, Robert Morris, Mario Merz, Vito Acconci, Mel Bochner, John Baldessari, and Jeff Koons, are drawn from MoMA’s holdings and from other public and private collections, spanning a range of mediums including painting, sculpture, photography, video, and live performance.

During a career spanning half a century, Sonnabend helped to shape the course of postwar art in Europe and North America, championing some of the most significant artists of her time. Opening her first gallery in Paris in 1962 and her second in New York in 1970, Sonnabend displayed a steadfast commitment to exhibiting demanding new art. This interest stemmed from a deep curiosity. Sonnabend once noted, “I like what I do not at first understand,” and she was instinctively drawn to art that she considered “difficult to classify on the basis of things already known.” Embracing an ambassadorial role, Sonnabend was instrumental in bringing new art across the Atlantic, helping to introduce American Pop art and Minimalism to Europe in the 1960s and Italian Arte Povera to the United States in the early 1970s. In the ensuing decades, she continued to seek out and support work that reinvented the notion of what art could be.

The exhibition includes works from important exhibitions held at Sonnabend’s galleries in Paris and New York, such as Jasper Johns’s Device (1962), which was part of the inaugural show at Galerie Ileana Sonnabend in Paris. Also featured are major works by American Pop artists whose European solo gallery debuts took place at Sonnabend: Roy Lichtenstein’s Little Aloha (1962); Claes Oldenburg’s Tartines (1964); James Rosenquist’s Volunteer (1963–64); Andy Warhol’s 1947 White (1963); and Tom Wesselmann’s Great American Nude #75 (1965).
Artist Michelangelo Pistoletto helped introduce Sonnabend to many of the Arte Povera artists in Italy whose work she presented in Paris and the U.S. Pistoletto’s early mirror painting Due Persone (Two People) (1963–64) is included in the installation, as is Igloo Fibonacci (1970) by Mario Merz, which was featured in the artist’s American debut at her New York gallery. In the late 1960s, Sonnabend brought the first wave of American Minimalism across the Atlantic to European audiences, represented in the exhibition with works by Robert Morris, Larry Bell, and John McCracken.

In the 1970s, Sonnabend sought out and supported some of the most noncommercial Conceptual, new-media, and performance-based art of the day. She grasped very early that photography and video were being used as tools in Conceptual artists’ practices. The exhibition includes Winding Towers (1966–97) by Bernd and Hilla Becher, a German artist duo she brought to America for their first solo gallery show in 1972. The following year she began showing work by John Baldessari, whose Throwing Balls in the Air to Get a Square (1972–73) is also featured in the exhibition.

Live performance was a key element of the Sonnabend Gallery’s program in the 1970s. The exhibition includes Da inventare sul posto (To Invent on the Spot) (1972), a work by Jannis Kounellis that encompasses both a painting and a performance featuring a violinist and a ballerina, which was shown in Kounellis’s first North American solo show at Sonnabend’s New York gallery. Film documentation of Vito Acconci’s provocative 1972 exhibition, at which he debuted Seedbed and two other performances, is also featured. A selection of films and videos from Castelli-Sonnabend Tapes and Films, which Sonnabend founded with Leo Castelli in 1973, provides a glimpse into this groundbreaking initiative to distribute moving-image works produced by artists associated with the duo's respective galleries.

In the 1980s, the diversity of Sonnabend’s taste encompassed an array of innovations. She promoted the work of artists such as Terry Winters and Carroll Dunham and helped introduce German Neo-Expressionist painters to American audiences, giving A. R. Penck his American solo debut. She also took on a group of artists who would become synonymous with the Neo-Geo movement, represented in this exhibition by works including Ashley Bickerton’s Tormented Self- Portrait (Susie at Arles) (1987–88) and Jeff Koons’s Pink Panther (1988).

ILEANA SONNABEND BIOGRAPHY:
Ileana Schapira was born in Bucharest, Romania, on October 28, 1914, the daughter of a prominent Jewish industrialist. She met Leo Castelli when she was 17 and married him the next year. After the outbreak of World War II, the couple escaped Europe and settled in New York City, where Castelli opened a gallery in their home in 1957. They divorced in 1959, and Ileana went on to establish her own career in the art world. She married Michael Sonnabend, a Dante scholar, in 1960, and in 1962 they opened the Galerie Ileana Sonnabend in Paris, later opening another gallery in Manhattan in 1970. A voracious collector and pioneering gallerist, Sonnabend’s 50-year career helped shape the course of art in the 20th century.

The exhibition is supported by the MoMA Annual Exhibition Fund.

Ileana Sonnabend: Ambassador for the New is accompanied by a fully illustrated catalogue, featuring the work of 41 artists who exhibited in Sonnabend’s eponymous galleries in Paris and New York from the early 1960s through the late 1980s. A biographical essay by Leslie Camhi, artists’ recollections of working with Sonnabend, and individual entries on the featured works provide further reflection on the legendary gallerist's taste and lasting influence. 172 pages, 56 color and 54 black-and-white illustrations. Hardcover, $29.95. Published by The Museum of Modern Art, New York, and available in December at MoMA Stores and online at MoMAStore.org. Distributed to the trade through ARTBOOK|D.A.P. in the United States and Canada, and through Thames & Hudson outside the United States and Canada.