In God We Trust

The exhibition focuses purely on the exploration of the variety of religious beliefs and practices of which the US is composed. It brings together a multigenerational group of contemporary American artists who will look at religions, singular beliefs, spirituality, unusual faiths, sects or cults from an outside perspective. 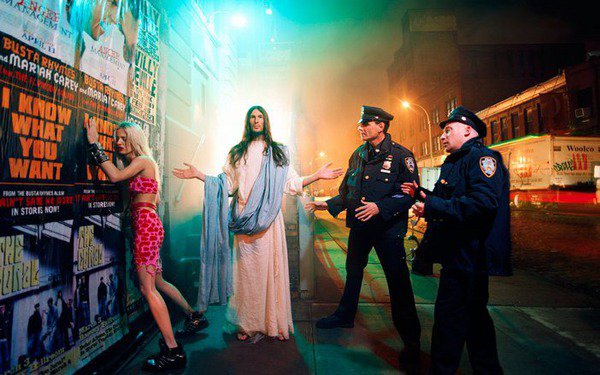 The exhibition focuses purely on the exploration of the variety of religious beliefs and practices of which the United States is composed. For both in the past and in the present, religion has played a highly significant and multifarious role in the United States, to the extent that today the country might be considered one of the most religiously diverse in the world. While the rich panoply of traditional religious communities and identities is still a major and changing element of the United States, we can also witness the emergence of new modes of religiosity whereby each person can define a religious identity for themselves in opposition to a relativistic vision of contemporary American society. The controversial motto used as the title of the exhibition, one that has often been questioned by different political and religious groups, may be interpreted in the context of today’s religious complexity as suggesting that America is no longer “one nation under [one] god”. For, in addition to its strong assertion of faith, the phrase does not foreclose a possibility of “choosing my religion” that can take on the most varied forms and facets.

“In God We Trust” will bring together a multigenerational group of contemporary American artists from different religious backgrounds, who will look at religions, singular beliefs, spirituality, unusual faiths, sects or cults from an outside perspective, bringing viewers closer to the particular dynamics of each and thus unveiling the variegated landscape of American religion and the extraordinary diversity of U.S. cultures. The exhibition will also deal with many aspects of this complex theme focusing, for example, on the relationships between religion and society, economy/capitalism, politics, patriotism/Americanism, sport, popular culture, etc.