Money. Alongside excessive communication, inordinate mobility is one of the determining factors among the global phenomena of the early twenty-first century. As part of this year's main focus, the Fotogalerie is showing artworks concerned with the manifold aspects of this subject from differing viewpoints. 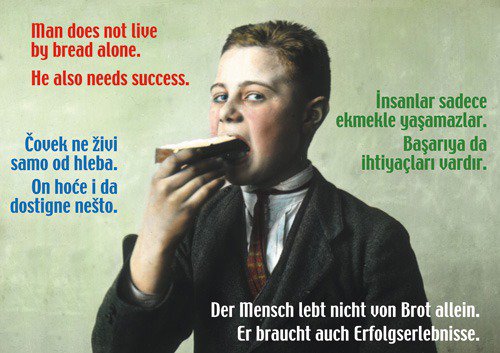 Alongside excessive communication, inordinate mobility is one of the determining factors among the global phenomena of the early twenty-first century. As part of this year’s main focus, the Fotogalerie Wien is showing artworks concerned with the manifold aspects of this subject from differing viewpoints. The three-part series of exhibitions contains positions relating to the interwoven fields of voluntary travelling, borders and border areas and the volatile flows of capital and information with their physical consequences affecting many people. The curatorial team has developed each part of this trilogy together with the artists in an open process, and in so doing set off on a trip that often contains surprising discoveries. The interaction of the various works produces a dialogue that repeatedly renders new moments visible and makes it possible to point up the multi-levelled nature of the subject of mobility. To approach this through the medium of images can also be read as a characteristic of globalization because images are among its most mobile entities that long ago began to ignore all borders whatsoever.

After the topics of “Travel” and “Borders”, “Money” is the third and final FOTOGALERIE WIEN exhibition this year dealing with our special focus on MOBILITY. It deals with the virtual and volatile influences of globalised markets in goods and financial services and their consequences for the real world. In addition to research-based works, documentation and critical analysis of the machinations of the powerful, the show is supplemented by works that are based on an emotional approach. Here, the topical and worldwide relevant subjects of the financial and economic crisis, the property crash and the corruption and abuses of power are made visible in a number of different ways. The linkage between exploitation and profit skimming, the widening gap between rich and poor and the powerlessness and existential threat experienced by the broad masses as a result of the crisis are all put up for discussion.

In their video, The Bull Laid Bear (2012) Zanny Begg (AU) and Oliver Ressler (AT) analyse the background of the current recession and financial crisis (the bear market) – as compared to the bull market i.e. the economic boom. The gripping interaction between animation and classical interview takes place in a pub where gangster-like bears hang out and two US economists, an activist and a criminologist talk about the hard facts of the collapse of economic order.

The artist group Chto Delat (RU) is showing the video, The Tower: A Songspiel (2010) in the cinema of the Fotogalerie Wien. It concerns a real high-rise project planned for the centre of St. Petersburg by the energy giant, Gazprom. The many-voiced scene, a choral, is split between those who see it as representing a glorious future and those who are critical and finally prevent it. Social rifts are made just as visible in this work as the connections between those demonstrations of power that are camouflaged as progress and corruption.

In the series NixCheckCashing (2011), the artist group G.R.A.M. (AT) restages press photos of the facial expressions and bodily gestures of horrified and puzzled stock and bonddealers reacting to the drastic fall in prices during the financial crisis. These images of stockbrokers in shock –usually absent from the media – frequently surface when the crisis continues, thus giving it a face. Since 1998 the artist group has reconstructed in some series real events and in this way makes the function of the images and the mechanisms of picture politics visible.

In the experimental film, Die ArbeiterInnen verlassen die Fabrik (2012), Katharina Gruzei (AT) is making a reference to the first film of the Lumière brothers, La Sortie de l’Usine Lumière à Lyon (1895) and at the same time pointing to the chronically acute problems of working conditions in industrial production. Shot in an abandoned tobacco factory in Linz – which meant the loss of hundreds of jobs – the viewer is accompanied through the corridors lit by flickering neon by an continuously increasing crowd of workers. Will they return or are they under threat of outsourcing?

The works of Helmut & Johanna Kandl (AT) engage critically with the postmodern working situation. Using coloured glass diapositives from the interwar years, they make an art intervention by employing affirmative slogans from the repertoire of neoliberal “newspeak” in a cynical way. This makes the divergence between the promise of appropriate payment for performance and the real market situation visible (Your Way to the Top, 2001). The work is supplemented by Womit handelst Du? (2011), a video by Helmut Kandl that shows street artists and street vendors in their daily struggle to survive.

Wouter Osterholt and Elke Uitentuis (NL) drive through Victorville, a small town in California, using their custom-built, mobile “mini-McMansion” and portray its inhabitants in their video work, Your House is in our Hands (2009). This new town in the middle of nowhere around a hundred miles from Los Angeles offers people with low incomes the possibility of affording their own home with a garden and thus having a part of the American Dream. In their concise documentary analysis the artist duo succeeds in capturing the wishes, desires and the changing living conditions after the explosive increase in the numbers of 'instant' homes and thus the place, fears and criticisms after the property crash.

In her photo work, No Futures! (2009), Lisl Ponger (AT) talks about the classic genre of Dutch early capitalist “market pictures”. The careful composition thematises the inter-relationship of the market, social inequality and falling sales that are the result of the crisis. The title refers not only to fear of the future and the well-known punk slogan but also embodies a demand to end speculation in futures of basic foodstuffs on the commodity markets. The tulips to the seller’s left are an indication of this: at one time the purchase of a high-priced tulip bulb was a speculation on a prosperous future.

In her video, Espiral (2010/12), Isa Rosenberger (AT) restages Kurt Jooss’s expressionist ballet “the green table” (1932) in which he used dance to unveil the linkages between power, economics and war in connection with the first worldwide economic crisis. Shot in front of the Austrian National Bank, Rosenberger’s work concentrates on the role of Austrian banks and their (mis)conduct then, as now. The title, Espiral (Spiral), is a reference to the dance school of the same name established by Jooss in Santiago de Chile which enabled children of underprivileged parents to get an education independent of the globalised economy.

Yorgos Zois (GR) is showing in his short film, Titloi Telous (Out of Frame) (2012), empty advertising hoardings along the streets of Athens. He captures the impressive and atmospheric images of the tragic situation in Greece in the manner of a still photographer. The empty panel skeletons of capitalism can be understood as a parable of hopelessness that the crisis has brought to many places. A lonely dog’s bark penetrates the ghostly shots against a blue sky. A Greek flag waves, lost in the distance.

Philipp Levar and Petra Noll, on behalf of the collective